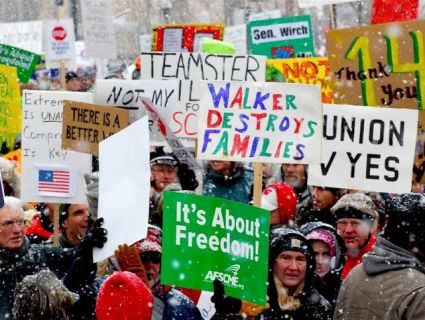 Earlier this month, a shadowy Wisconsin political group with a post-office box address joined the fight to recall Republican Gov. Scott Walker. The group, Wisconsin for Falk, spent more than $500,000 on TV ads backing Democratic recall candidate Kathleen Falk yet did not disclose its funders or who started the group. Walker’s recall campaign alleged Wisconsin for Falk was funded by “big government, public sector union bosses.”

Wisconsin for Falk, Mother Jones has learned, is bankrolled big labor unions including the American Federation of State, County, and Municipal Employees (AFSCME), one of the nation’s largest public-employee labor unions, and the Wisconsin Education Association Council, the state’s largest teachers union. A high-ranking labor source confirmed AFSCME and WEAC’s involvement and funding for Wisconsin for Falk for the purpose of making pro-Falk independent expenditures in the recall fight. Walker’s recall election is expected to take place in early June.

In response to questions about WEAC’s role in Wisconsin for Falk, WEAC spokeswoman Christina Brey wrote in a statement: “Consistent with our recommendation of Kathleen Falk for governor, we—like many organizations—are supportive of Wisconsin for Falk and other grassroots efforts to elect her as governor in a recall election of Scott Walker. The extent and specifics of our support will be reported in compliance with all relevant campaign finance laws.” An AFSCME spokesman pointed to the Wisconsin chapter’s endorsement of Falk, which touted her “unwavering support for workers’ rights.”

Wisconsin for Falk acts like a so-called super-PAC—but with a twist.* Like a Super-PAC, Wisconsin for Falk can raise and spend unlimited amounts of money but can’t coordinate with candidates. Super-PACs were spawned by the DC Circuit Court of Appeals’ 2010 SpeechNow.org decision and the Supreme Court’s 2010 Citizens United decision. Federal-level super-PACs have to disclose their donors. In Wisconsin, though, an outfit like Wisconsin for Falk can keep quiet about where its money is coming from thanks to a quirk in state law, says Mike McCabe, executive director of the Wisconsin Democracy Campaign, a nonprofit that tracks money in Wisconsin politics. (Wisconsin for Falk is also registered with the Internal Revenue Service as a 527 organization, a type of tax-exempt group that discloses its donors.)

Wisconsin for Falk has yet to report any spending to Wisconsin election officials. The group’s treasurer, Michael Vaughn, did not respond to multiple requests for comment. But the Milwaukee Journal Sentinel reported in early March that Wisconsin for Falk had spent $519,150 on pro-Falk commercials in the Milwaukee, Madison, Green Bay, La Crosse, and Wausau TV markets. The group unveiled its first ad, “Believer,” on March 5:

Wisconsin for Falk isn’t organized labor’s only form of support for Falk. Eight different unions have officially endorsed her, including WEAC, AFSCME Wisconsin, two state chapters of the Service Employees International Union, and the American Federation of Teachers-Wisconsin. Dian Palmer, president of SEIU Healthcare Wisconsin, says her union will leverage its networks and organizing power to support Falk in the recall’s Democratic primary and potentially the general election. “We’re going to be doing everything we can to get her elected,” Palmer says.

Recent polls show that Falk would be competitive with Walker in a general recall election. She trailed Walker 49 percent to 42 percent in a January Marquette University poll that had a ±7 point margin of error. A February Public Policy Polling survey found Falk leading Walker 48 percent to 47 percent in a hypothetical matchup (with a ±3 percentage point margin of error).

If Walker’s fundraising pleas are any indication, his campaign will no doubt slam Falk for the support she’s receiving from Wisconsin for Falk. (To be clear, there’s no evidence of a direct connection between Falk’s recall campaign and the union-backed outfit.) One fundraising letter blasts “Big Labor Bosses” who want to bankrupt the state of Wisconsin. “The vicious attacks by Big Labor and President Obama reinforce the importance of your immediate help,” one letter reads. “The fight to stop them starts here and now in Wisconsin before it spreads like an out-of-control wildfire in your state and across the nation.”

Walker raised $12.2 million and spent $9.9 million between January 1, 2011, and January 17, 2012, in connection with his recall defense, according to the Wisconsin Democracy Campaign.

* This paragraph was clarified to more accurately reflect Wisconsin for Falk’s legal status. Return to the story.