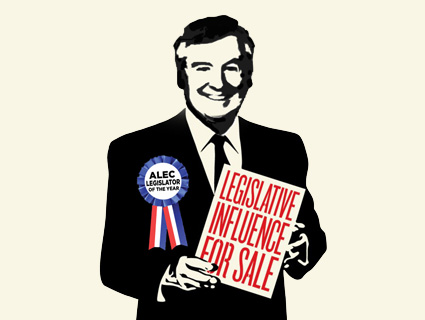 Late last week, lawyers representing Common Cause filed a lawsuit under the Tax Whistleblower Act with the Internal Revenue Service accusing ALEC of violating its status as a 501(c)(3) nonprofit by “massive[ly] underreporting” its lobbying activities. The suit alleges that ALEC exists primarily to give corporate members the ability to “lobby state legislators and to deduct the costs of such efforts as charitable contributions.” Non-profits like ALEC can’t make lobbying a majority of their activities. (For a primer on ALEC, check out this 2002 Mother Jones story, “Ghostwriting the Law.”)

Bob Edgar, Common Cause’s president, said in a statement that ALEC “tells the IRS in its tax returns that it does no lobbying, yet it exists to pass profit-driven legislation in state houses all over the country that benefits its corporate members.” Edgar adds, “ALEC is not entitled to abuse its charitable tax status to lobby for private corporate interests, and stick the bill to the American taxpayer.”

ALEC legal counsel Alan Dye said in a statement on Monday that Common Cause’s suit was “patently false.” “The current complaint mostly ignores applicable law and distorts what it does not ignore,” Dye said. “After three decades of counseling clients on nonprofit and federal disclosure requirements, it’s clear to me that this is a tired campaign to abuse the legal system, distort the facts, and tarnish the reputation of ideological foes.”

According to the IRS, a 501(c)(3) organization such as ALEC may not keep its tax-exempt status if “a substantial part of its activities” entails lobbying. “A 501(c)(3) organization may engage in some lobbying, but too much lobbying activity risks loss of tax-exempt status,” the IRS’ website says. The crux of Common Cause’s suit is this: For years ALEC has helped draft model legislation for state legislatures while connecting corporate members with state lawmakers, yet “for years” the group has not reported spending any money on lobbying. On the contrary, the suit alleges, ALEC’s “primary, if not sole objective, is to ‘influence legislation.'” To back up its claim, the suit points to ALEC “Issue Alerts” and talking points on bills sent to state lawmakers, model press releases distributed by ALEC, and ALEC’s work tracking active legislation in the states as evidence of trying to “influence legislation.”

Common Cause’s suit is the newest salvo in a broader campaign against ALEC. In recent months, a coalition of liberal groups including Common Cause and Color of Change targeted ALEC for backing “discriminatory” voter ID bills and so-called Stand Your Ground self-defense laws, like the one at issue in the Trayvon Martin shooting. The coalition pressured ALEC’s corporate members to cut ties with the group; Wendy’s, Kraft, McDonald’s, Pepsi, and Coca-Cola, among others, soon ditched ALEC.

Targeting a controversial group’s non-profit status is hardly a new tactic. Last year, FoxNews.com pointed readers to a pre-filled-out IRS tax complaint form challenging the tax-exempt status of media watchdog (and Fox foe) Media Matters for America. Fox News also interviewed an Alabama man who had filed a tax complaint against Media Matters, which the network said was waging a “liberal propaganda war” against Fox. The IRS has not commented on whether it is probing Media Matters’ nonprofit status.