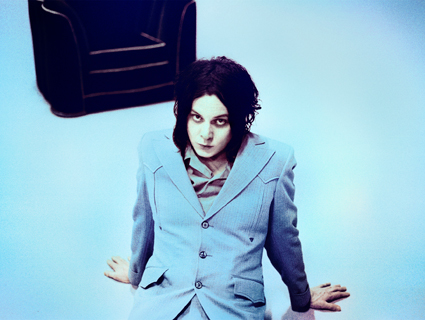 In 2011, the White Stripes called it quits. “It was necessary to announce that the White Stripes didn’t exist anymore for me to really put myself out there as a solo artist,” frontman Jack White told Rolling Stone.

By then, White had carved a niche for himself as an artist in his own right, making the rounds between two high-octane rock n’ roll bands, The Raconteurs and The Dead Weather, and at last founding a brick-and-mortar outfit for his eight-year-old private label, Third Man Records, in Nashville. But he hadn’t yet done the thing one would most naturally predict from a solo artist: a solo project.

That changed last Tuesday with the release of Blunderbuss, White’s “debut” album as a solo artist. It’s a wild-eyed, lushly orchestrated work that tends to showcase White’s ear as a songwriter over his hand as a guitarist. Both talents were on display Friday night as White and his vast and fluid retinue of backing musicians played New York City’s Webster Hall.

The small, dim space was sold out to a crowd of black-leather-jacketed punk rockers, moms with cargo pants tucked into combat boots, greasy hippies, and a healthy contingent of clean-cut white kids who looked to have walked off the set of Girls. Photographers circulated with Polaroid cameras, leaving behind a wake of happy couples shaking negatives. Whispers (unconfirmed) circulated that Jim Carrey was quaffing champagne on the balcony. The show was broadcast live on YouTube; one might not have noticed but for a moment just before the first set when a screen descended and played a Jack White music video, presumably being watched simultaneously by eyes from Tulsa to Tokyo, for which, in a bizarrely meta twenty-first century moment, we all clapped.

Opening the show were The Black Belles, a Third Man Records-produced trio of white-faced, black-lipsticked femmes fatales who looked like they ditched out on Slytherin Quidditch practice to ride down to the Lower East Side on broomsticks, smoking cigarettes and blasting the Sex Pistols. Their set left behind a vague scent of premature Halloween. This was compounded by the stage hands, who drifted about in a fog of dry ice and sported porkpie hats and prodigious beards, as if the fresh ghost of Levon Helm were keeping watch in the wings.

At last, searing blue lights panned onto White, strutting onstage in a tight-fitted powder-blue suit, encircled by a sextet of female musicians draped in gauzy white dresses, looking like Odysseus if he had said “Fuck it,” and gone to jam with the Sirens. In the second set White’s backing band would be fully male, the gender divide being conceived as a way to keep each show on the tour fresh (and, conceivably, to further probe issues of gender roles and male/female dynamics that are touched on in songs like “Freedom at 21“).

The biggest difference between this Jack White and others of the past is his onstage company.

Indeed, the biggest difference between this Jack White and others of the past is his onstage company. Forget about a lone drummer with a stripped-down kit. The instrumentation is like what you’d hear at a Nashville backyard pickup session: upright bass, fiddle, harmonica, mandolin, keyboards, and lap steel—lots of lap steel. As the band(s) rolled through most of Blunderbuss and a delicious sampling of White Stripes classics, White called out soloists and let the ensemble do the heavy lifting, a refreshing and venerable turn for any “solo” artist.

But White’s melodic sensibility and lyrical styling are, if more refined, not substantively different from the straight-ahead, full-blooded rock n’ roll we’ve been hearing from him for over a decade. Blunderbuss is a feat of orchestration and a welcome addition to the White canon, but it boils down to this: if you liked Jack White before, you’ll like him now; if you didn’t, you won’t. And for those of us who recall having our minds blown by “Fell in Love With a Girl,” that’s a good thing.