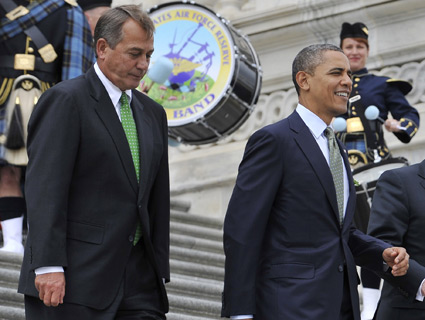 Moral equivalency often exerts a gravitational pull for political reporters and pundits. When assessing what’s wrong with Washington (or other elements of the political system) it’s easy to accuse all, casting a pox on each side. Matt Bai’s deeply reported epic account in the New York Times Magazine of the collapse of the Grand Bargain—the debt reduction deal attempted by President Barack Obama and House Speaker John Boehner last summer—cannot resist this overpowering tug.

Here’s the bottom line of the article: “Obama and Boehner have clung to their separate realities not just because it’s useful to blame each other for the political dysfunction in Washington, but because neither wants to talk about just how far he was willing to go.”

Relying on the Rashomon cliché, Bai gives the impression that each of the key players is locked within his own perspective—and, consequently, no one is right or wrong. Boehner and his GOP comrades huff that Obama tried to change the terms of the deal and overturned the possible accord; Obama and his aides claim that Boehner couldn’t cut a deal because of opposition within his tea party ranks. And this clash of realities is what’s wrong with Washington.

Interest declared: My new book, Showdown: The Inside Story of How Obama Fought Back Against Boehner, Cantor, and the Tea Party, covers the clash over the Grand Bargain, and much of Bai’s in-depth account overlaps with mine. But Bai doesn’t emphasize what is the bottom-line point: Obama and his crew are right to say that Boehner could not deliver—and that is what was most responsible for the deal’s collapse.

Boehner walked away from the Grand Bargain not once but twice. Bai gives short shrift to this first Boehner bolt. As I report in Showdown, as Boehner was talking with Obama in early July 2011 about an agreement to decrease the deficit that would include about $800 billion in revenues and significant reductions in entitlement programs including Medicare, Medicaid, and Social Security, Boehner’s fellow House GOPers got nervous that the speaker was yielding too much (and possibly putting the Bush tax cuts for the rich on the chopping block). Several moderate House Republicans who were pals of Boehner—and who would have happily supported such a fiscal accord—came to see Boehner. They told him Rep. Eric Cantor, the House majority leader, was saying to other House Republicans that Boehner had gone RINO—Republican in Name Only—meaning Boehner was on the verge of selling out the dominant tea party wing of his party. Boehner’s friends feared a mutiny against Boehner that would end up with Cantor assuming the speakership. Stop, they counseled Boehner. And he did. Boehner was essentially chased out of the Grand Bargain by his own people. (You can read a more detailed account in this excerpt from the book.)

Round Two came a week later. Boehner revived talks with the White House (this time with Cantor at his side), and now he was pushing a deal more favorable to the GOP. Still, the White House was interested. Intense negotiations resumed. And then the goal posts were moved. Not, as Boehner would later say, by Obama, but by Senate Republicans. The Gang of Six—a bipartisan group of lawmakers in the upper chamber—had hammered out a deficit plan that included about twice the revenues than the under-construction Obama-Boehner Grand Bargain.

This put Obama in a jam—but only because Boehner was in his own jam. The overarching political reality of the Obama-Boehner negotiations was that Boehner could not guarantee his caucus’ support of the package he was trying to assemble with the president. He did not have control of his own troops. This meant that any plan he and Obama drew up would need Democratic votes in the House to pass—and perhaps at least half of the House Democrats. So Obama had to calculate what could draw the necessary Democratic support in the House (and in the Senate).

The president reached the reasonable conclusion that House Democrats would not accept entitlement cuts in return for $800 billion in revenues when a number of Senate Republicans had signed off on more than twice the amount of revenues. In other words, if Boehner could not corral his own Republicans to support the Grand Bargain, then the speaker would have to pick up the votes of a fair number of House Democrats. And the Senate Republicans supporting the Gang of Six plan had raised the price of that support.

Obama gave Boehner a choice: Boost the revenue portion of the plan, or scale back the entitlement reductions. Boehner and his aides were not immediately put off by this. His negotiators mulled this over for a day or so. Then Boehner—after refusing to return a phone call form the president for 24 hours—again abruptly turned tail and publicly accused the president of rewriting the terms.

This was a simplistic and inaccurate charge—more of an escape route for Boehner, who apparently had reached the obvious conclusion that he couldn’t sell much of anything to his own caucus and needed a safe (and politically useful) retreat from his engagement with Obama. In fact, Boehner was not being honest with his own people. Republican House aides—who did not work for Boehner—told me that the speaker and his staff had told them that Obama, during these negotiations, had refused to get specific on the numbers regarding entitlement reductions and, thus, had not been negotiating in good faith. But, as both Showdown and Bai’s piece note, there had been a great deal of specific numbers placed on the table by both sides. Moreover, Boehner’s public dishonesty was revealed in a letter to his fellow House Republicans. He asserted that Obama had been “adamant that we cannot make fundamental changes to our entitlement programs.” But Obama, as Bai’s piece shows, had conceded much on that front.

It doesn’t take too close a reading of Bai’s account to discern Boehner’s slipperiness. (Bai, though, does not focus on Boehner’s disingenuous claims to his fellow GOPers.) And Bai does note that Obama had managed to persuade top Democrats—including Harry Reid and Nancy Pelosi—to back the Grand Bargain, while Boehner had failed to line up support on his own side. Yet Bai’s article, in total, can too easily be absorbed as bolstering the convenient blame-both-sides approach to political analysis. (In a speech on Tuesday, Obama blasted the tendency of political observers to say, “They’re equally at fault…and the truth lies somewhere in the middle.” He contended this “reinforces” public cynicism.)

Toward the end, Bai writes, “Obama moved the goal posts, Boehner couldn’t deliver—that would soon become fixtures of Washington’s double-sided reality. Both were essentially true, and yet incomplete.” Incomplete, indeed. And when the complete story is told, the responsibility for failure is not shared equally. The title of Bai’s piece is “Obama vs. Boehner: Who Killed the Debt Deal?” There is an answer to that question, but Bai ducks providing it. Instead, he observes, “What’s clear now is that the only thing holding Washington back from a meaningful step toward reducing debt and modernizing government isn’t any single policy dilemma, but rather the political dynamic that makes compromise such a mortal risk.” By blaming the “political dynamic”—rather than specific political actors—he takes a pass. Maybe that’s what’s wrong with Washington.