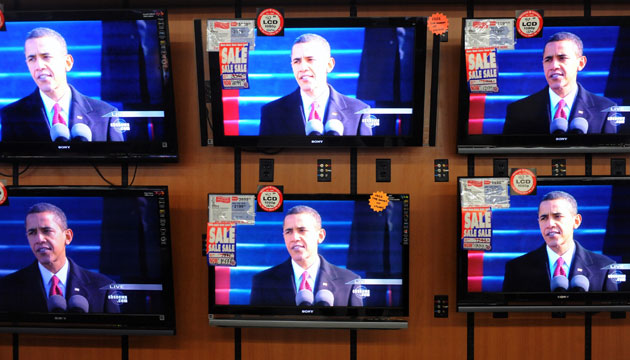 News organizations cultivate a reputation for demanding transparency, whether by suing for access to government documents, dispatching camera crews to the doorsteps of recalcitrant politicians, or editorializing in favor of open government.

But now many of the country’s biggest media companies, which own dozens of newspapers and TV news operations, are flexing their muscles in Washington in a fight against a government initiative to increase transparency of political spending.

The corporate owners or sister companies of some of the biggest names in journalism—NBC News, ABC News, Fox News, the Washington Post, the Wall Street Journal, USA Today, Politico, the Atlanta Journal-Constitution, and dozens of local TV news outlets—are lobbying against a Federal Communications Commission measure that would require broadcasters to post political ad data on the internet.

As we have recently detailed, political ad data is public by law but not easy to get because it is kept only in paper files at each station. The FCC has proposed fixing that by requiring broadcasters to post online the details of political ad purchases, including the identity of the buyer and the price.

(ProPublica has been inviting readers and other journalists to send in the files to be posted as part of our Free the Files project.)

Over the past few months, several major media companies have dispatched top executives or outside lobbyists to the FCC to oppose the proposed rule or to push a watered-down version, disclosure filings show. (The FCC will vote on the issue April 27.)

(ProPublica has published stories in partnership with many of these news organizations, and has an agreement with NBC’s owned and operated TV stations for pre-publication access to our news apps and a contribution by NBC to ProPublica.)

In a speech this week at the National Association of Broadcasters convention in Las Vegas, FCC Chairman Julius Genachowski excoriated the broadcasters as working “against transparency and against journalism.”

The industry’s opposition to the transparency proposal has sometimes been heated. In filings submitted to the FCC in January and March, Allbritton Senior Vice President Jerald Fritz raised the specter of “‘Soviet-style standardization” of ad sales if political ad files are required to be put online in a single format.

In a February meeting with the FCC, Walt Disney executives complained about the “logistics and burden” of putting the political ad information online.

That month, executives from Disney, NBC, and News Corp. argued in a meeting with FCC officials that posting the political ad data would allow “competitors in the market and commercial advertisers [to] anonymously glean highly sensitive pricing data.”

Television stations must by law offer political candidates the lowest rates on ads. Broadcasters have argued that making this information available online—and not just at stations—would hurt their ability to negotiate with other advertisers.

Advocates for the online disclosure rule have countered that the political ad information is already public by law and the measure would simply make the existing disclosure rules relevant for the internet age. Advocates have also pointed out that keeping paper files in electronic form should actually be more efficient for stations.

Allbritton, NBC, and Walt Disney did not respond to requests for comment on the FCC chairman’s charge that they have positioned themselves “against transparency and against journalism.” News Corp. declined to comment.

Some media companies have also pushed a watered-down proposal to post only some of the public political ad data, and to put it up on individual station websites instead of a central FCC website.

The group suggested that instead of putting the full, itemized political ad data online, stations would post aggregate data once a week.

“What we were saying is, if you want the public to be informed about what’s being bought at what price, maybe there’s a simpler way to do it,” Mary Jo Manning, an attorney representing the group, told ProPublica. “Transparency is giving people information that is useful.”

But when the FCC pressed the group for details on its plan, the stations said they opposed posting even the aggregate data in a single format prescribed by the FCC. They also opposed posting the data on a central FCC website, saying they wanted to post the limited data only on the stations’ own websites. If enacted, both of those stances would make it more difficult to get and analyze the data.

Since there is a one-week sunshine period ahead of FCC votes, Friday was the last day that interested parties were able to lobby the commission before its public meeting April 27.