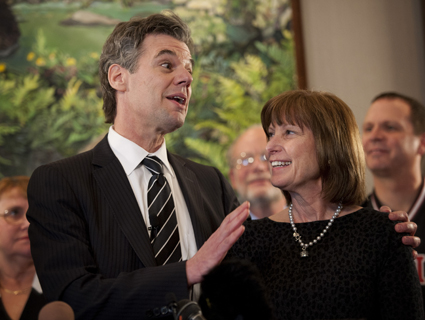 Rep. Michele Bachmann’s bid to return to Congress again next January seemed to be going along just fine. She has been blessed with the state’s most conservative congressional district (even redder than usual after recent redistricting) and the ability to raise huge sums of money from her national network of devotees. And the former GOP presidential candidate’s first two Democratic challengers were earnest but unintimidating—Anne Nolan, an unsuccessful candidate for state representative who cites the Occupy movement as an inspiration, and Brian McGoldrick, a local restaurant owner with no political history.

But the latest entry into the race for the Democratic nomination could shake things up. On Tuesday, Jim Graves, a Minneapolis hotel magnate,  announced his intent to take on the tea party ringleader this fall, and he’s planning on using his own considerable wealth to become the Democratic nominee and then, if he wins that contest, to pursue Bachmann. And he believes his business experience makes him the Democrats’ best shot. But when it comes to policy matters, this political novice is a bit fuzzy.

Bachmann, running for her fourth term, has faced serious challengers in each of her three races in the Republican-leaning sixth district. Her closest brush with defeat came in 2008—due in part to her accusation that House Democrats were anti-American and ought to be investigated. Still, she won that contest by 3 percent with help from a third-party challenger. Graves, though, doesn’t think Democrats’ past failures have any bearing on his own odds. “We’re just, quite frankly, we’re not those people.” He continued in the royal we: “We’re Jim Graves and we’re a businessman and we’re tenacious and we’re tough and ready to go toe to toe, face to face with Michele Bachmann and we’ll see how that plays out.”

Graves, who Twin Cities Business Magazine noted bears “a small resemblance to the actor Peter Gallagher,” now resides in Minneapolis but grew up in St. Cloud, a Mississippi River city and the district’s largest population center, where Democrats will have to do very well to have any chance of knocking off Bachmann. He stayed in town for college at St. Cloud State and made his first fortune in hospitality, founding, in the 1970s, the motel chain AmericInn, which boasts locations throughout the upper Midwest. In 1993 he cashed out for seven figures and changed course with his eponymous company, Graves Hospitality, dedicated to building and maintaining luxury hotels. His piece de resistance was the Graves 601 Hotel in Minneapolis, ranked as one of Travel + Leisure magazine’s 500 best hotels in the world. Or as one Yelp commenter puts it, “24 floors of WOW!!!”

It has a pillow menu.

“I want to see what the courts have to say about it and then I’ll comment on that,” Graves says of the individual mandate.

“There’s a lot of parallels and a lot of crossover,” he says of his new gig as a candidate. “It feels similar: You’re trying to sell a product—the product in this case happens to be a candidate against Michele Bachmann.”

“I’m kind of a hybrid,” he says, when asked what kind of politics he’s selling. “I’m a very free-market kind of guy. I’m a business guy. I think the markets make better decisions than the politicians in the marketplace. But we need a level playing field and I believe very strongly, I mean really strongly, that the middle class, and affordable health care, and livable wages, and good education, that is the core ingredient to the future of this country. So that’s another thing, that’s probably the fundamental thing I really believe in. You need people to have dignity, you need people to have cash flow and their families, to be able to be part of the society and contribute.”

Although nominally the same sixth district she’s represented since 2007 (it wraps around the Twin Cities like a yoke before branching out along the Mississippi River to the northwest), there were a few alterations during the redistricting process that made the district—which gave 55 percent of the vote to John McCain—slightly more red. The most notable change was the excision of Bachmann’s hometown of Stillwater, making their potential matchup the odd instance in which both candidates would actually reside outside the district.

Bachmann, despite her (occasionally embarrassing) failure as a presidential wannabe, remains a formidable candidate, for her rhetorical bomb-throwing has won her a national audience. (“I think she should fact-check some of the things she says before she says them,” Graves offers.) Her high-profile and far-to-the-right attacks on Obamacare (and other Obama-related assaults) allow her to raise huge piles of money, despite the fact she is a back-bencher with a light legislative footprint. Yet David Nir, Daily Kos‘ election guru, has touted Graves as “a good fit for this district.” Graves’ capacity to self-finance what would be an expensive challenge doesn’t hurt. “We’re gonna seed the campaign as needed,” Graves says, though promising to solicit funds the old-fashioned way first.

Bachmann wasted no time attempting to cash in Graves’ entry into the race. On Wednesday, she blasted out an email to her supporters warning that lefty groups were coalescing around him: “My opponent already has the support and endorsements of labor unions such as UNITE HERE, and will not only continue to receive union endorsements but also be a recipient of their funds.”

The switch from the private sector to the rigors of politics has forced Graves to make some adjustments. “I do mumble a little bit,” he concedes. But on the policy front he’s playing it safe for the time being. Regarding the Affordable Care Act, Bachmann’s signature concern—she’s warned that the president will soon become a “health care dictator” and that the government will deprive conservative critics of medical services—Graves is defensive. “I like preexisting conditions being able to be covered,” he says. “I like the idea of college-aged students and students and kids that are up in age being able to stay on their family’s program. I’d like to see us try to bend the cost-curve and make health care more affordable for everyone, and accessible to everyone.”

But he hasn’t made up his mind on the individual mandate, the glue that holds large parts of the bill together and the reason why its fate will be determined by the Supreme Court. “Let’s see what the courts say in June on that one,” he said. “I want to see what the courts have to say about it and then I’ll comment on that.”

Unlike Anne Nolan, one of the two other Democratic aspirants in the race, Grave is not sold on the Occupy Wall Street movement—perhaps a smart move, given his district’s demographic makeup. “Occupy Wall Street, I really don’t know what they stand for to tell you the truth, and I’m being very candid about that,” he says. “I think everybody has a right to assemble under the law, and that’s fine.” He adds: “I’ve been following [the Occupy movement], I’ve been there. I’ve been in Philadelphia. I’ve been in New York. I’ve been in Washington. I’ve been following it, I just don’t know what they stand for.”

He says he supports gay marriage and abortion rights, and he thinks it was a mistake to repeal the Glass-Steagall Act that separated investment banking from retail banking. But on the subject of the Dodd-Frank Wall Street reform law, he demurs: “I’d rather not get into that,” he says. There are no issues listed on his campaign’s threadbare website, and none will be appearing until after the party’s district nominating convention on Saturday.