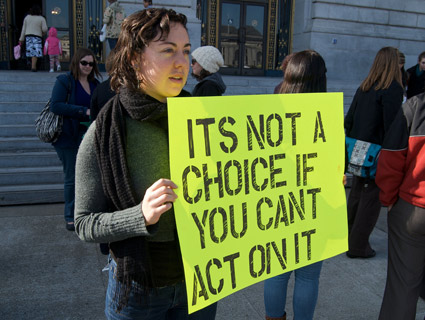 Is it a choice if your state doesn't have a single abortion clinic? Mississippi may soon find out.<a href="http://www.flickr.com/photos/ari/4155428721/">Steve Rhodes</a>/Flickr

Last year, Kansas narrowly avoided becoming the first “abortion-free” state. That title might soon go to Mississippi, thanks to a bill that would require clinic doctors to obtain official admitting privileges at a local hospital before they can perform abortions—a standard that many believe was custom-designed to foil the state’s only abortion clinic.

Proponents of the bill, which was sent to the Governor’s desk by the state Senate yesterday, claim they’re just trying to protect women’s health by ensuring that if a complication occurs after an abortion, doctors can admit the patient to a hospital. While all the physicians at the Jackson Women’s Health Organization in Jackson, Miss. are certified OB-GYNs—another of the bill’s requirements—only one of its doctors currently has admitting privileges to a nearby hospital. Instead, in the rare case of complications, the clinic has a patient-transfer agreement with a local hospital to ensure that women can be treated there.

Admitting privileges are usually only granted to in-state doctors who will provide the hospital with a certain number of patients per month. The clinic’s owner, Diane Derzis, told the Associated Press that most of the clinic’s doctors commute to Jackson from out of state because “they are routinely threatened and stalked for their work.” And as Derzis explained to Jezebel, “We do not have enough problems to admit that many patients.” Overall, Derzis isn’t optimistic that any of the three hospitals in the area—two of which are religiously-affiliated—will grant the privileges to her staff and has promised to argue the law in court if her clinic can’t secure them.

As MoJo‘s Kate Sheppard has reported, onerous clinic regulations like these, known by abortion-rights supporters as “targeted regulation of abortion providers” or “TRAP” laws, are a favorite new tactic of abortion foes. According to the Guttmacher Institute, at least eight other states require abortion providers to have hospital admitting privileges. Mississippi would be the first state to impose an OB/GYN requirement on abortion providers.

While bills like these are usually submitted under the guise of patient safety concerns, many proponents make no bones about their true goal: to end access to legal abortion. That is certainly the case in Mississippi.

During the House floor debate last month, the bill’s author state Rep. Sam Mims said, “If this bill causes less abortions to happen, I believe it’s a positive result.” In a statement applauding the proposal, Lt. Gov. Tate Reeves went even farther, saying, “This is a strong bill that will effectively end abortion in Mississippi.” Gov. Phil Bryant said he will sign it and vowed, “As governor, I will continue to work to make Mississippi abortion-free.”

Of course, if the Jackson Women’s Health Organization is forced to close, it won’t mean the end of abortion in Mississippi. It will just make the procedure less accessible—and less safe—for some women. During final debate on the bill, members of the black caucus noted that while wealthy women will be able to access private or out-of-state abortions if the state’s only public clinic is shuttered, many low-income women in Mississippi won’t have that option. “People who have resources can do certain things,” explained Sen. David Jordan. Felicia Brown-Williams, who works in public policy at Planned Parenthood Southeast, agrees. “This bill will create a climate where desperate women resort to desperate measures. Women’s lives will be jeopardized, not protected.”

When asked if women might turn to dangerous, back-alley abortions if the clinic closes, Sen. Dean Kirby, who voted for the bill, answered, confusingly, “That’s what we’re trying to stop here, the coat-hanger abortions. The purpose of this bill is to stop back-room abortions.” Maybe he just needs a refresher on what illegal abortions are actually like.