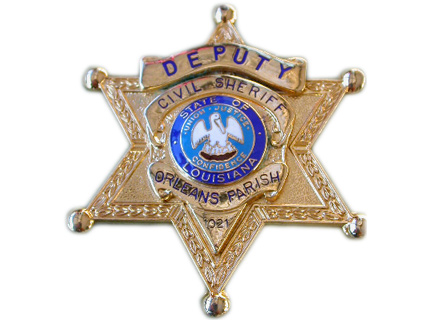 As hellholes go, there are few worse places in America than the Orleans Parish Prison.

New Orleans’ teeming city jail first hit the radar of most Americans following Hurricane Katrina, when thousands of inmates were abandoned for days in flooded cells without food, water, ventilation, or electricity—some of them “standing in sewage-tainted water up to their chests,” according to the ACLU. But OPP’s problems did not begin with Katrina, nor end in the storm’s wake, when prisoners were shipped back to the jail’s surviving buildings.

This week, the Southern Poverty Law Center filed a federal class-action lawsuit on behalf of OPP’s inmates. The 38-page complaint—which names as defendants Sheriff Marlin Gusman, along with the jail’s wardens and medical directors—describes a facility where prisoners “are at imminent risk of serious harm.” About 44 percent of the inmates are there awaiting trial, and haven’t been convicted of the crimes they were charged with. But pretrial detention at OPP, the suit contends, is in itself a brutal punishment that can expose people to physical and sexual abuse, and even death.

“Rapes, sexual assaults, and beatings are commonplace,” the lawsuit states. “Violence regularly occurs at the hands of sheriffs’ deputies, as well as other prisoners…People living with serious mental illnesses languish without treatment, left vulnerable to physical and sexual abuse. These conditions have created a public safety crisis that affects the entire city.”

“It’s just complete lawlessness in there,” Katie Schwartzmann, the SPLC attorney representing the prisoners, told us in an interview. “The place is full of knives. There are tons of assaults, beatings.”

“Look at their hospital transport list,” she continues. “For the month of February alone, they had 23 emergency room transports for lacerations, fractures—and that’s just the stuff they had to send people to the hospital for. That doesn’t even count the stuff they have to handle at their infirmary.”

Stints at OPP are particularly horrendous for inmates with mental illness, whom the SPLC believes make up as much as two-thirds of the jail’s population—their condition often goes undetected. “There’s not even a classification system,” says Schwartzmann, “so people who have disabilities that make them vulnerable have a really hard time of it.”

“He ate enough toilet paper that he asphyxiated. Tell me if that’s not deliberate indifference!”

When inmates are booked into OPP, the lawsuit notes, prison officials suspend their medications for 30 days and sometimes longer: “Unsurprisingly, this practice causes some individuals to experience suicidal ideation.” When this happens, “suicidal prisoners with mental health needs are transferred to a direct observation cell, in which they are held almost naked for days.”

Schwartzmann cites one inmate, William Goetzee, who tried to snatch a security officer’s gun outside a courthouse, professing that he wanted to kill himself. “They bring him to OPP,” she says. “He attempted to hang himself. They cut him down and two days later he killed himself by eating toilet paper. He ate enough toilet paper that he asphyxiated. Tell me if that’s not deliberate indifference!”

Inmates deemed mentally ill but not suicidal “are transferred to the psychiatric tiers—where they are locked down in their cells for 23 hours a day and deprived of mental health interventions,” notes the complaint. “People living there are not allowed to go outside or visit with their families. Overhead lights are on 24 hours per day, and the tier contains actively psychotic people living on the ground in overcrowded cells. Deputies do not walk the tiers. Rape is rampant.”

Prisoners seeking mental health services, the suit continues, “are discouraged from seeking necessary care” not only by the strict lockdown but also because they are charged a copayment for submitting the request.

The Department of Justice “gave the sheriff time to remedy it, but he just hasn’t.”

Josh Hobson, a former OPP inmate and witness in the SPLC suit, contacted a local paper alleging abusive conditions at the jail. When the guards found out he was talking, they beat him brutally, he claimed, warning, “‘This will teach you to talk to people'” and “‘What goes on in here stays in here.'”

The problems at OPP are hardly news to the local or federal governments. Just last week, the US Marshals Service, which was paying Orleans Parish to house some federal prisoners, announced that it had pulled them from the jail due to “concerns about conditions and safety.”

For decades, OPP operated under a federal consent decree. In 2009, the Department of Justice investigated the facility and issued what Schwartzmann calls a “scathing report” that deemed conditions at the jail unconstitutional. “They gave the sheriff time to remedy it, but he just hasn’t. So now we’re three years out and conditions are pretty much the same. Which is why we filed the case.”

The inmates abandoned during Katrina were dismissed as “crackheads, cowards and criminals.”

Since Monday, when the lawsuit was filed, the sheriff’s office has been referring requests for comment to a local PR agency, which did not respond to our emails. But the agency did issue a statement saying that “the deputies and staff of the OPSO are working daily to address the care, custody and control of the inmates in our custody,” that there is a “zero tolerance policy regarding sexual activity and assault” at Orleans Parish, and that the jail health care system has been “accredited by a national group.”

The past, however, may offer some indication of how the sheriff might have responded. After Katrina, when OPP prisoners complained that they had been abandoned and abused, Sheriff Gusman dismissed them as “crackheads, cowards and criminals.” At another point, Gusman told reporters: “They’re in jail, man. They lie.”