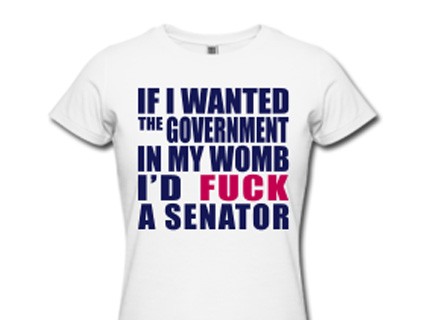 Can an airline boot a passenger for wearing a T-shirt it deems “offensive”? That’s apparently what happened to one woman wearing a pro-choice T-shirt on an American Airlines flight out of Washington this week, RH Reality Check reports.

The woman boarded her first flight just fine, wearing a T-shirt that read, “If I wanted the government in my womb, I’d fuck a senator.” (The shirt was made in response to a sign that an Oklahoma lawmaker made earlier this year to protest a proposed law granting rights to fertilized eggs.) But as the woman was about to deboard to switch to her next flight, a flight attendant approached her and told her that she needed to talk to the captain because her T-shirt was “offensive.” The woman, identified only by the initial “O,” described the incident to RH Reality Check:

When I was leaving the plane the captain stepped off with me and told me I should not have been allowed to board the plane in DC and needed to change before boarding my next flight. This conversation led to me missing my connecting flight. I assumed that because I was held up by the captain, they would have called ahead to let the connecting flight know I was in route. Well, upon my hastened arrival at the gate of the connecting flight, it was discovered that they did indeed call ahead but not to hold the flight, only to tell them I needed to change my shirt. I was given a seat on the next flight and told to change shirts.

Her bags were checked through to her final destination, so she couldn’t change shirts. She said she ended up covering it up with a shawl, and was able to get home on the later flight.

American Airlines media relations representative Tim Smith told Mother Jones via email that it was the language on the shirt, not the message, that prompted the response. “Let me strongly emphasize that the only reason she was asked to cover up her T-shirt was the appearance of the ‘F-word’ on the T-shirt,” he wrote. He pointed to a line in the airline’s “Conditions of Carriage” that notes that the airline can refuse to transport a passenger or can remove them from a flight at any point if they “Are clothed in a manner that would cause discomfort or offense to other passengers.”

“[O]ur crew has the final say on any type of garment that could make others uncomfortable,” wrote Smith. “Among such issues, we routinely do not allow any garment of any type to display that word.” In a follow-up email, he again stated that it was not the pro-choice message that prompted the incident, but the f-bomb.

The incident certainly raises questions about what an airline can deem offensive. Her shirt didn’t present a security threat, nor would it make anyone physically uncomfortable. They just didn’t like the word choice. I can think of a lot of T-shirts that make me uncomfortable (like this one or these). So what are the limits to what an airline can deem offensive?