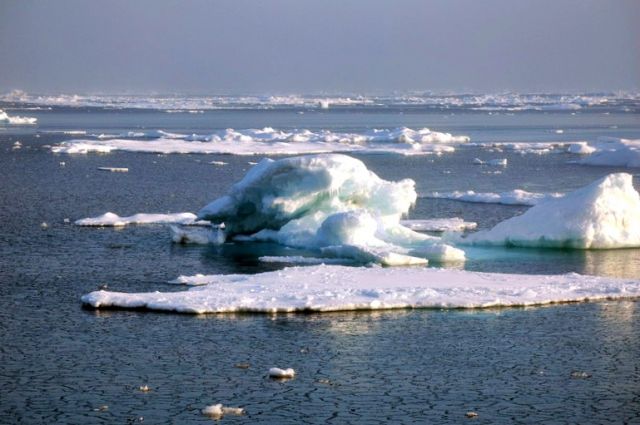 We’ve known for a while that a melting Arctic is likely to be a big methane producer, and that methane is a potent greenhouse gas. Until recently we thought the primary sources of Arctic methane were from:

Now a new paper in Nature Geoscience reports the Arctic Ocean is itself a source of atmospheric methane. Here’s how this scientific riddle got cracked. From NASA’s Earth Observatory:

During five research flights in 2009–10, [researchers] measured increased methane levels while flying at low altitudes north of the Chukchi and Beaufort Seas… The methane level detected during the flights was about one-half percent higher than normal background levels.?But where was the methane coming from? The team detected no carbon monoxide in the atmosphere, which would have been a signature of methane coming from the human combustion of fuels. And based on the time of year, the location, and the nature of the emissions, it was unlikely that the methane was coming from high-latitude wetlands or geologic reservoirs. 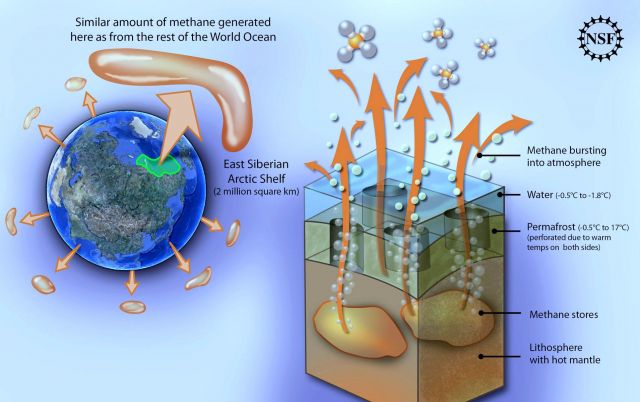 “While the methane levels we detected weren’t particularly large,” says lead author Eric Kort, “the potential source region, the Arctic Ocean, is vast. So our finding could represent a noticeable new global source of methane.”

We further show that high methane concentrations are restricted to areas over open leads and regions with fractional sea-ice cover. Based on the observed gradients in methane concentration, we estimate that sea–air fluxes amount to around 2 mg d−1 m−2, comparable to emissions seen on the Siberian shelf. We suggest that the surface waters of the Arctic Ocean represent a potentially important source of methane, which could prove sensitive to changes in sea-ice cover.

To put that into perspective, the East Siberian Arctic Shelf is leaking an amount of methane comparable to all the methane from the rest of the world’s oceans put together. In the schematic above, you can how its permafrost is highly porous, allowing methane stored under to burst through cracks into the atmosphere.

According to the new research, now we’re talking about a rapidly de-icing Arctic, with methane bursting through its ice cracks, capable of contributing hella big methane to the atmosphere. Talk about a tipping point.

No one’s yet sure how the methane is produced, but lead author Eric Kort suspects biological productivity in Arctic surface waters may be the culprit. “It’s possible that as large areas of sea ice melt and expose more ocean water,” he says, “methane production may increase, leading to larger methane emissions.”

The video condenses the rapid changes underway in the Arctic into two minutes (though prior to the new evidence on methane production from the Arctic Ocean).