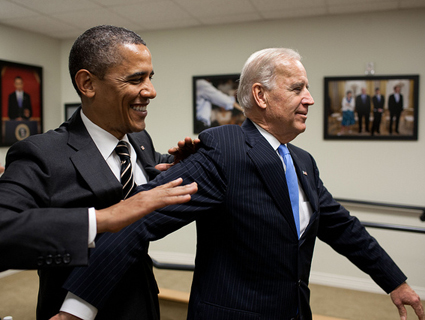 It's all fun and games until you're thrown off the ballot in Iowa.<a href="http://www.flickr.com/photos/whitehouse/7161207234/sizes/z/in/photostream/">Pete Souza</a>/Flickr

As the old saying goes, history repeats itself, first as tragedy, then as the Republican Party of Iowa.

Via Felicia Sonmez, it looks like the Iowa GOP has gone birther. On Monday, Don Racheter, chairman of the Iowa GOP’s 2012 platform committee, told Radio Iowa’s O. Kay Henderson about the state party’s new platform. Racheter said the document, which is still being drafted, was deliberately written to call into question President Barack Obama’s eligibility for office by including a plank mandating that the commander-in-chief be a “natural born citizen”:

There are many Republicans who feel that Barack Obama is not a ‘natural born citizen’ because his father was not an American when he was born and, therefore, feel that according to the Constitution he’s not qualified to be president, should not have been allowed to be elected by the Electoral College or even nominated by the Democratic Party in 2008, so this is an election year. It’s a shot at him.

This comes just one week after Arizona Secretary of State—and Mitt Romney Arizona campaign co-chair—Ken Bennett announced that he might try to keep Obama off the ballot in November unless he can see an original copy of the President’s birth certificate. Just when you think birtherism might fade away, it pops up, Jamie Moyer-style, with a surgically reconstructed elbow and a seemingly unending trove of heretofore-undisclosed evidence.

The rest of the Iowa GOP’s platform is itself a somewhat spectacular document. The platform says much about the tone and tenor of the conservative grassroots five-and-a-half months out from election day. It advocates nullification of federal laws, the abolition of 10 cabinet-level departments (plus the TSA, FDA, ATF, Fannie Mae, and Freddie Mac), an end to birthright citizenship, and “the implementation of Lean Six Sigma” at all levels of government. It calls for the rejection of “UN Treaty on the Rights of the Child” (which social conservatives fear will curtail the perfectly justified practice of spanking), aims for the term “assault weapon” to be redefined as something other than a semi-automatic weapon, and asserts that “all individuals have the freedom to choose the quality of air in their home.” The “so-called ‘NAFTA Superhighway'”—which doesn’t exist—should be scuttled. There are 14 different planks pertaining to the United Nations and the North American Union, most notably the pro-sustainability Agenda 21 pact, which the Iowa GOP considers “diabolical.”

This particular Republican conspiracy theory has been debunked time and time again and will have no bearing on the election, but it does present an opportunity for Mitt Romney to finally rise to the occasion and denounce the extreme voices in his party.