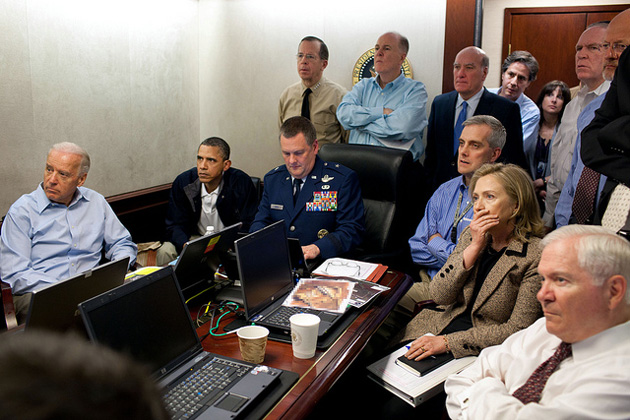 It’s May 2012, and as Chevy Chase would say, Osama bin Laden is still dead. And now the vanquished Al Qaeda leader is a political football, being bandied by both parties to score election-year points. The GOP, having slipped a bit from its perch as the national security party, seems content to let its faithful run with some pretty odious BS about President Obama’s involvement in the raid that killed bin Laden. Here are the nine worst lies still in circulation about Obama and Osama:

Obama took credit for Seal Team Six’s killing of bin Laden, even though the president once called them “Cheney’s private assassination team” and said bin Laden deserved a trial. Fact or crap? Total crap. Don’t believe everything you read in your great uncle Bernard’s email forwards.

Obama was totally Photoshopped into that situation-room photo. I can’t really say what’s the saddest thing about this rumor, except that it apparently started because right-wing bloggers aren’t up-to-speed on the Sad Keanu meme.

Obama was ready to blame the military if the raid failed. Thank the tin-foil hat platoon at Blackfive, the right-winger’s milblog of choice, for this one. The other day, they performed a postmodernist deconstruction of the now-famous Panetta memo detailing Obama’s orders on the raid, and fantasized about how Obama would shift the blame if all hell broke loose. But just try to find a reputable political analyst who thinks Obama could have avoided responsibility if the mission had been botched. Here’s David Frum, author of Bush’s “Axis of Evil” speech, giving POTUS mad props: “Obama can claim credit for its success, not because he planned the raid, but because he would have had to wear the blame if the raid had failed.”

Obama commissioned an opinion poll before ordering the raid. To tell him what? That the American people might like to see bin Laden brought to justice? According to Blackfive blogger Uncle Jimbo: “John Weisman said in his book Kill bin Laden, and confirmed to me personally, that Obama had a poll taken on the potential fall out if the public found he didn’t pull the trigger, and that this delayed the raid while he waited on the answer.” Perhaps Jimbo should have noted somewhere that Weisman’s book is a novel. Even the right-wing Washington Times knocked Weisman’s use of fiction to exact “ill-conceived revenge on members of the administration.”

Bush, not Obama, did all the work to get bin Laden. Ex-CIA officer Jose Rodriguez, who’s hawking a new book about how awesomely the agency performed after 9/11, says getting bin Laden was always a Bush priority and the current  administration “built on work pain­stakingly pursued for many years before Obama was elected.” Getting bin Laden was so important to the Bush administration that when the trail went cold in 2006, they shut down Alec Station, the CIA’s special bin Laden task force. (That shutdown coincided with the rise of the civil war in Iraq, which kept the Bush-led US military and intel communities kind of busy.) Bush also downplayed bin Laden as “a person who’s been marginalized…I really just don’t spend that much time on him.” Obama, by contrast, said in 2008 that he’d go into Pakistan to find bin Laden. “I think that if we have Osama bin Laden in our sights, and we’ve exhausted all other options, we should take him out before he plans to kill another 3,000 Americans,” he said. “I think that’s common sense.”

Torture of terrorist suspects was the only thing that led the US to bin Laden. Sorry, Dick Cheney, not likely. The increasingly fragile-minded right-wing milbloggers at Blackfive today pointed to Rodriguez’ recent account, which argues torture got good intel on bin Laden. “Well strap me to a board and dribble water on my nose, that stuff actually works,” Blackfive crowed. Except my colleague Adam Serwer has read the Gonzalez account, and it actually shows that torture didn’t work. Which is the same conclusion the CIA’s top investigator reached a while back. Serwer’s also got a more detailed rundown on all the fallacies in the pro-torture argument. They are many.

Anyway, the president doesn’t really have a lot of say in these things! Or, as Mitt Romney put it, “Even Jimmy Carter would have given that order” to go after bin Laden (even though Romney previously said getting the al Qaeda leader was “not worth moving heaven and earth“). But as our DC bureau chief, David Corn, reported in his recent book Showdown, Obama’s order to send US troops into Pakistan to get bin Laden was “a test case in presidential decisionmaking“—and not an easy one. Perhaps that’s why Bill Clinton said of Obama’s order: “He took the harder and the more honorable path. When I saw what had happened, I thought to myself, ‘I hope that’s the call I would have made.'” Then there was Karl Rove on Fox the day bin Laden died. “I think President Obama needs to be complimented on his handling of this operation,” Bush’s right-hand man said. My, how things change in an election year.

Obama refuses to admit we’re in a war with terrorists. Dick Cheney was all over this one in 2009, along with Hannity and the right-wing punditocracy. It’s true that the White House has stopped talk of a “war on terror”—since, as a Republican presidential candidate once said, “you can’t shoot an idea with a gun”— but Obama’s taken pains to combat the specific groups that target Americans. As he put it in his inaugural address: “Our nation is at war against a far-reaching network of violence and hatred.”

Obama thinks terrorists just need a good talking-to. The Republican National Committee really said this about then-Sen. Obama in the 2008 campaign. “This claim is beyond false,” Politifact wrote. “It’s Pants on Fire wrong.” Which means, prepare to hear it again and again until November.