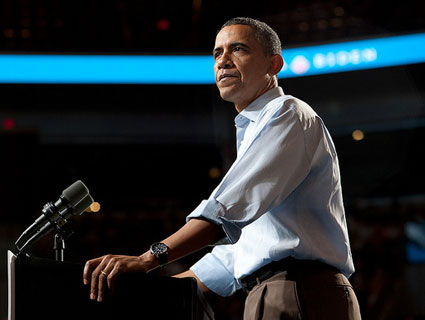 The group, Priorities USA Action, was founded by former Obama White House aides Bill Burton and Sean Sweeney in April 2011. As the leading Obama-affiliated super-PAC, it was supposed to provide a counterbalance to big Republican outside-spending groups. But the super-PAC has so far raked in just $9 million for the 2012 election cycle. By comparison, the pro-Romney super-PAC Restore Our Future has raised $52 million, and the pro-Gingrich super-PAC Winning Our Future pulled in $24 million before Gingrich dropped out of the race. Priorities isn’t just struggling to compete with its Republican counterparts—it’s not playing in the same league.

If recent events are any indication, Priorities and its ilk won’t be catching up with Rove and his dark-money allies anytime soon. Here are four reasons why.

Soros, the billionaire financier and philanthropist, grabbed headlines this week by pledging $1 million apiece to American Bridge 21st Century, a liberal opposition research super-PAC, and America Votes, which coordinates the activities of more than 300 progressive-minded groups around the country. Soros’ donations fit with his preference for supporting efforts to register new voters, get out the vote, and build a strong progressive movement. (The Open Society Foundations, chaired by Soros, have supported Mother Jones‘ campaign finance reporting.)

Far less appealing to Soros—and to his allies in the Democratic donor community—is bankrolling super-PACs that focus on attacking candidates. Negative ads, however, are the bread and butter of presidential super-PACs like Restore Our Future and Priorities USA Action. Although Soros gave $27.5 million to groups committed to defeating George W. Bush in 2004, he doesn’t appear eager to fund the “tsunami of slime” headed the way of voters this fall. Nor, for that matter, do other donors who gave millions eight years ago, such as insurance magnate Peter Lewis. “The idea that we’re going to engage in an arms race on advertising with the Republicans is not appealing to many liberal donors,” David Brock, founder of American Bridge, told the New York Times.

2) Obamaland donors are no fan of big-check politics.

In 2008 Obama’s presidential campaign squelched efforts by independent political operations to boost the then-senator’s bid for the White House. Obama and his deputies wanted full control of the campaign’s message, free from the worry that an unaccountable outside group would muddle the narrative offered by the candidate. Obama stressed that he could win the election on the back of small donations, without wealthy donors cutting six- and seven-figure checks to independent outfits. And he did.

Now, post-Citizens United, the rules of the game have changed. Super-PACs and shadowy nonprofits are fixtures of the presidential campaign, and Obama’s super-PAC needs big checks to return fire against conservative groups like Karl Rove’s American Crossroads and Americans for Prosperity, which has received funding from the Koch brothers. Obama campaign manager Jim Messina admitted as much in February when he announced that the Obama campaign was giving Priorities USA Action its blessing and allowing campaign staffers and cabinet officials to appear at Priorities fundraisers. Yet loyal Obama donors have failed to pony up.

Fundraisers, strategists, and campaign finance experts contacted by Mother Jones say Obamaland donors remain unconvinced on the need for super-PACs. To wit: By the end of March, only 12 of Obama’s 532 “bundlers,” the super-fundraisers who pull in donations from friends and peers totaling $50,000 and up, had given to Priorities. Obama donors, they say, care more about giving the maximum donation of $35,800 directly to the campaign and convincing their friends to do the same. The importance of super-PAC giving is “just coming on their radar,” says Dick Harpootlian, a member of Obama’s National Finance Committee.

Fundraisers also attribute the slow pace of giving to complacency among donors. With the GOP’s circus-like primary fresh in their minds, some donors believe Obama will dispatch presumptive GOP nominee Mitt Romney with ease. As a result, they don’t feel pressed to give to a super-PAC. “One issue I’ve seen is that Democrats are not convinced the president can lose,” Burton, the Priorities cofounder, said in mid-April. “They look at the polls, they look at Mitt Romney, and they think that the president is in fine shape for his reelection.” (Burton did not respond to a follow-up request for comment for this story.)

The last time the Democrats waded into the outside-money fight, in 2004, “we had the best fundraiser in all of politics: George W. Bush,” says one Democratic strategist with years of experience in the outside spending wars. Donors needed little convincing to donate to independent groups when Bush was president, the strategist says. Yet that eagerness in the donor community isn’t there in 2012. “There’s not that built up anger around Romney,” the strategist says.

Then there is the issue of return on investment. A conservative donor who gives a $1 million donation to Restore Our Future knows that that money goes toward electing a candidate, Mitt Romney, whose policies will benefit the donor’s bottom line—lower taxes, fewer regulations, and so on. A wealthy donor giving to Priorities does so with the knowledge that reelecting President Obama likely means a higher tax bill. “Our donors are not transactional,” Paul Begala, an adviser to Priorities USA Action, told the Washington Post. “For the Koch brothers, this is a straight return on an investment deal.”

Prominent gay donors are still steaming over President Obama’s decision in March not to sign an executive order banning federal contractors from discriminating against gays. Some gay donors are so angry, the Post reported, that they refuse to give money to Priorities. “A number of gay and progressive donors, unsolicited, have indicated to us that they aren’t considering requests to donate to the Obama super-PAC because of the president’s refusal to the sign the order,” explained an adviser to Jonathan Lewis, a gay philanthropist and Obama bundler.

The gay-donor boycott is no small matter. Almost 1 in 6 of President Obama’s top 117 bundlers, the ones who’ve bagged donations of $500,000 or more, are gay. And as the flow of donations from Wall Street has slowed, the Obama campaign has increasingly relied on gay donors to fill its campaign coffers. Wealthy gay donors’ refusal to give to Priorities cuts out a crucial source of cash for the president’s super-PAC.

President Obama’s newly announced personal support for legalizing gay marriage could win back some of those disaffected donors. Obama’s marriage statement “is going to make my life immeasurably easier raising money from LGBT donors and progressives in general,” bundler Jon Cooper told Capital New York. But as Mother Jones reported Wednesday, Obama will let states decide whether to legalize gay marriage and has no plans to demand federal legislation on the issue. His announcement, then, was about politics, not policy; it’s a far cry from signing the executive order those gay donors care so much about.

Obama’s super-PAC could use the support of those gay donors. Indeed, Priorities needs all the money it can find—and fast. With the presidential race officially in general-election mode, Republican donors are gunning for Obama with every dollar they can spare. And unless something changes, Priorities will be ill-prepared to counter the onslaught.