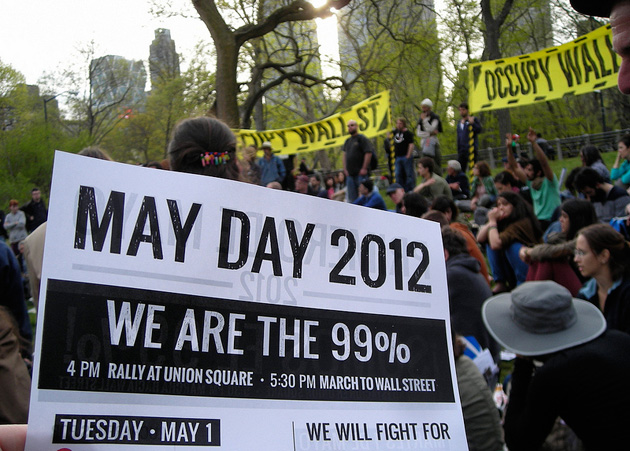 Read on for the rest of our primer, or jump to these latest updates:

Occupy Wall Street may have been written off by many Americans, but it’s hoping to get a huge stimulus today from the 99 Percent. Organizers are expecting tens of thousands of middle-class workers to take to the streets for May Day, the international worker holiday on which the Occupy movement has pinned its hopes for a resurgence. Occupy groups and their allies in the labor, immigrants’ rights, and environmental movements are planning coordinated protests in more than 100 American cities. “May Day will be the big kickoff of Phase 2 of Occupy,” says Marissa Holmes, an early OWS organizer. “I think we will see a lot of people in the streets taking more militant actions than they had in the past.”

May Day organizers have called for a general strike, urging sympathizers to skip work to attend marches and demonstrations. The biggest ones will likely be in Manhattan, where organizers say turnout will eclipse anything from last fall. (Here is a complete list of events). Activities include a pop-up occupation at Bryant Park; 99 Pickets at corporate targets around Midtown; a “free university” at Madison Square Park; and a 1,000-musician “Guitarmy” march to Union Square, where there will be a concert by Tom Morello of Rage Against the Machine. Later in the day, the occupiers will join forces with labor and immigrants’ rights allies in a massive “Solidarity March” from Union Square to “the heart of corporate corruption on Wall Street.” Though organizers want May Day to demonstrate Occupy’s alliances with other movements, some occupy affinity groups are planning more confrontational protests. One anonymous New York-based group, for instance, has vowed to blockade a bridge or tunnel leading into Manhattan.

In California, the International Longshoremen’s Union will shut down the Port of Oakland and some 4,500 members of the California Nurses Association are expected to skip work. Occupy Oakland scuttled a plan for what might have been the most controversial May Day action, a shutdown of the Golden Gate Bridge, after a coalition of striking bridge worker unions backed out. Still, California protesters plan to unveil a squat in San Francisco, hold three simultaneous marches in Oakland, and gum up traffic in Los Angeles with a Critical Mass-style protest on bicycles. Smaller Occupy groups, of course, are also planning protests in cities from Anchorage to Tucson, and any one of them could become a flashpoint.

Among Occupy’s main targets will be the five largest banks, which control a greater share of the economy today than they did on the eve of the financial crisis. With dozens of bank occupations likely to happen, May Day illustrates how the movement has become better organized. But so have the banks. In New York and Chicago, they’ve pooled resources to gather intelligence on protesters. One security consultant likened the cooperation to elks circling against a pack of wolves.

“If the banks anticipate outrage from everyday citizens, it’s revealing of their own guilt,” Shane Patrick, a member of the Occupy Wall Street press team, told Bloomberg News. “If they hadn’t been participating in maneuvers that sent the economy into the ditch, we wouldn’t even be having this conversation.”

Click on the map below to follow the latest developments, actions, and police responses to May Day activists:

Check back here throughout the day as events unfold. Our correspondents will be adding photos, video, and dispatches from protests on both coasts.

Scroll down for live updates from the San Francisco and Oakland.

12:00 AM PST: It didn’t take long for Occupy protestors to get out of hand in San Francisco:

Reports of property damage to cars and local businesses in the Mission District were immediately denounced by OccupySF, which also claimed that the perpetrators were “outside provocateurs sent in to tarnish the image of Occupy prior to the May Day actions.”

8:24 AM PST: Josh Harkinson (@JoshHarkinson) tweets us the following inflatable protest toy pic from the Bay Area’s Larkspur Landing ferry terminal, where striking workers have shut down the ferry system:

9:20 AM PST: At Larkspur Landing, Josh met Kerry Davis (below), a 31-year union mechanic who works on the Golden Gate Brige span. “That’s my jungle gym,” says Davis, who managed a few bugle calls for us (click here to listen), though he’s really a tuba player. He told Josh that the Bridge District asked its workers for $800,000 in contract concessions. The union offered $2 million but wanted cap on healthcare costs, a deal breaker.  “They call it premium sharing,” Davis says, “but it’s actually going to land on us, especially those who have families.” Still, Davis was not in favor of the scuttled plan to shut down the bridge this morning. “I don’t see how hurting the public is going to help our cause,” he explains. 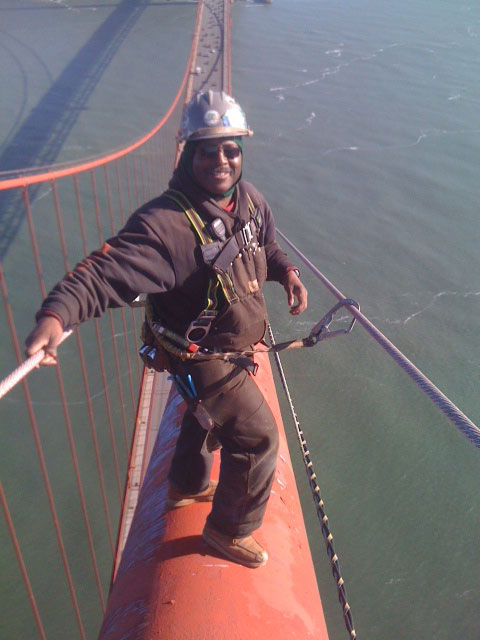 Kerry Davis on his “jungle gym.”

10:00 AM PST: Gavin Aronsen (@garonsen) was in Downtown Oakland covering Occupy’s anticapitalist march as it picketed from bank to bank when he ran into Scott Olsen. He’s the former Marine and Iraq veteran who suffered a brain injury last October, after Oakland Police fired a beanbag projectile at close range, striking him in the head. “I am not alright,” he says. Read Gavin’s dispatch here.

I missed a brief confrontation between anarchists and pro press guy trying to shoot them. Another reporter caught up in mix hit by banana.

11:16 AM PST: Looks like Gavin is now at the plaza in front of Oakland City Hall, where protesters are chilling as they await march scheduled for noon.

I’m not that impressed thus far with the numbers at #OO #M1GS. Maybe a few hundred, and demographic doesn’t seem any broader than before.

I was standing on the cornewr of 14th and broadway watching marches head up broadway when cops started chasing a woman.

Right in front of me, they knocked her off her bike and tackled her. Totally unclear why.

Fuck, I just got teargassed

I tried taking photos of a bloodied man being dragged to a police van but was shooed off by officers.

Police have backed off again and are warning protesters to clear the street. Unclear how many arrested. #baym1gs #oo

The standoff continues. I just saw an officer yell at another, who sulked off shaking his head in annoyance. #baym1gs #oo

Here’s a blurry shot of the bloodied guy, can’t see too much. I didn’t see what happened but he was in the skirmish. twitter.com/garonsen/statu…

People just seem to be milling around the streets, waiting for the cops to beat the shit out of them

#oo organizer says: “I’ve been waiting for may day to be over for weeks so we can get back to real organizing”

2:35 PM PST: The situation in Oakland is heating up again. Gavin Aronsen reports via Twitter that 1,000 or so protesters were facing off with the OPD: “Police are multiplying on 14th by City Hall, faced down by #OO. Music’s booming. Police are issuing dispersal orders but hard to hear.”

These dispersal orders are much more restrained than what I’m used to, with repeated reminders that #oo has “right to protest peacefully.”

They’re still warning of potential serious injury but in a less menacing way.

“Judge Thelton Henderson is watching,” a protest sign reads, referring to the man who could place the OPD in federal receivership.

An officer is explaining dispersal routes, says protesters must keep to the sidewalks. Many already are. #baym1gs #oo

I just heard on good authority that a second #baym1gs protester has been hospitalized, hit by an OPD projectile. Anyone know more?

According to the LA Times, the OPD response to Occupy protesters last fall has resulted in more than 1,000 misconduct complaints. The department’s monitor reported being “thoroughly dismayed” by some of the behavior witnessed.

The PIOs acknowledged to me that they were targeting individuals as opposed to doing more random arrests. “I don’t think it’s any secret.”

Targeted arrests: “You see the guy with the backpack and…get him,” officer says. Charge, arrest. I asked what charge, OPD shoved me away.

10:05 PM PST: There have also been sporadic arrests and reports of an unmarked Oakland police car getting torched, some smashed bank windows, and other miscellaneous vandalism. Gavin reports that the crowds downtown have dwindled to a few dozen, tops. So it’s pretty much goodnight from #OO, who apparently didn’t think much of the Fremont police coming onto their turf.

Scroll down for live updates from the East coast.

10:00 AM PST: Brooklyn protesters (and reporters) head over the Williamsburg Bridge into Manhattan

10:35 AM PST: Inequality pong! At the Occupy DC gathering…

Make it in the glass cup, you’re a 1%er – the rest and you’re with the 99% #MayDay #OccupyDC twitter.com/AndrewKroll/st… 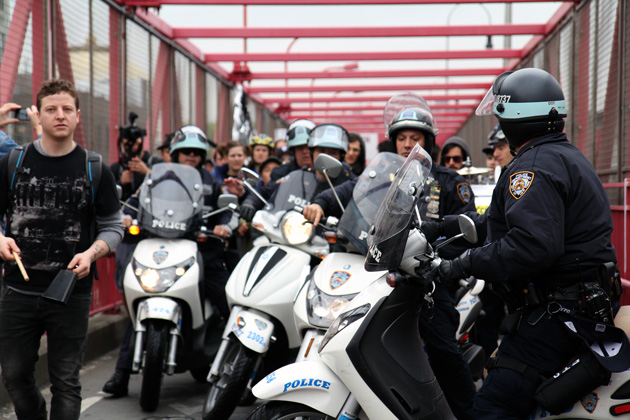 The scanner-transcribing service Breaking News Network reported six arrests at the clash near Washington Square Park, but as of 3:50 p.m., the police said they had no information on any arrests associated with the protests on Tuesday.

Protesters and the police had been playing cat-and-mouse across downtown, as the marchers ranged quickly from Chinatown to SoHo to Greenwich Village, taking to the roadways and often moving against traffic in an apparent attempt to thwart pursuit.

27 ppl and a dog Occupy Miami rally. Wow they are really reaching! twitter.com/SulyLeone/stat…

1:45 PM PST: As the weather in New York turns into a classic spring afternoon, groups are converging on Union Square from all parts of the city ahead of a march to Wall Street at 5:30 PM. See more photos here.

2:34 PM PST: Maybe this isn’t such a bust after all. Our man @JamesWest2010 in NYC reports that thousands are now marching down Broadway. The first wave is the unions, organized and vocal. The second wave will be Occupy Wall Street. The destination? Wall Street.

PIC: Unions first, now the throngs of the Occupy movement and its supporters, including these, in my opinion, cuties. twitter.com/jameswest2010/…

PIC: Uncountable thousands are marching through the streets of New York, spanning a dozen streets. twitter.com/jameswest2010/…

Wall st. Blocked off by Mounties, no getting in there anytime soon. #ows #m1gs

Well, folks. May Day in NYC, unlike Oakland, ended up on a pretty much peaceful note, so we’ll leave you with a few more of James West’s fine snaps from the march… 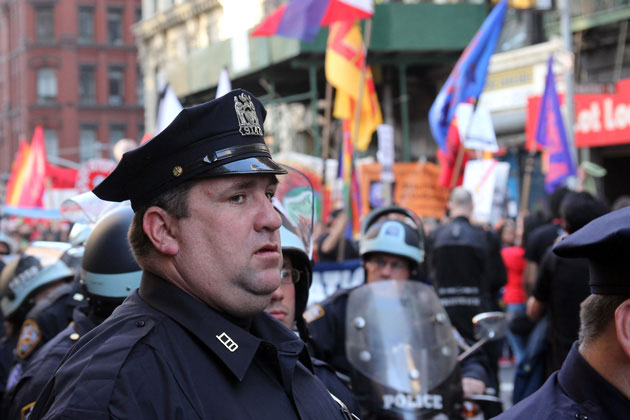 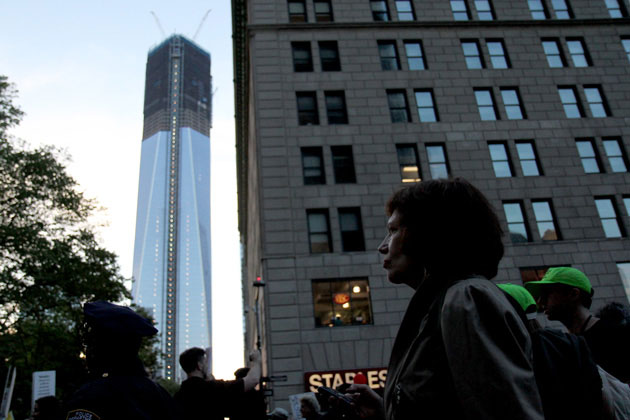 Marching past the Freedom Tower to be. James West 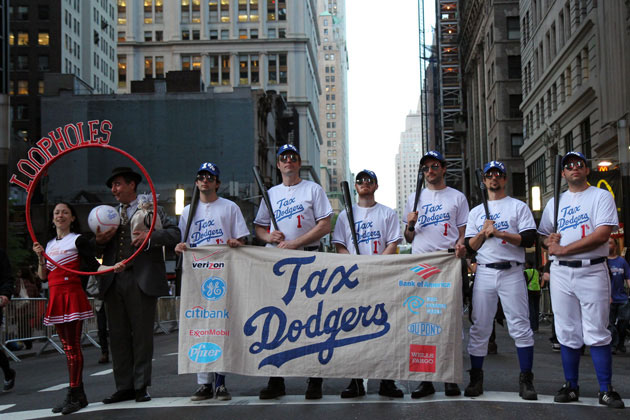 Brooklyn makes a inspired comeback. James WestAnd with that, we bid you good-night.