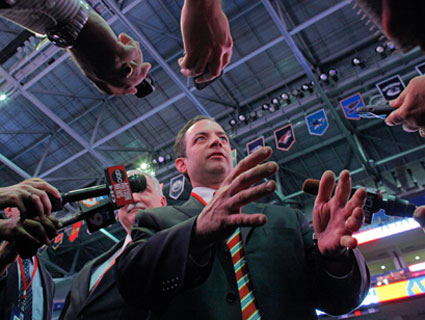 This private GOP polling memo obtained by Josh Green makes clear what we’ve assumed for a while: public support for marriage equality has shifted, irreversibly, and conservative opponents will have to softer their views substantially—and soon—or risk being left in the dust. That’s why President Obama’s public conversion on same-sex marriage seemed like such a long-time coming, and it’s why a southern conservative like Sen. Richard Burr (R-NC) would vote to allow gays to serve openly in the military in 2010; the trendlines were obvious.

Which brings us to Reince Priebus’ appearance on Meet the Press on Sunday. The Republican National Committee chairman, appearing on the show to defend his party and its presidential nominee, was asked how he feels about the gays. His response:

I think they deserve equal rights in regard to, say, discrimination in the workplace, issues such as, as Mitt Romney has pointed out numerous times, hospital visitations. I mean I think that for the sake of dignity and respect, sure. But if you’re defining marriage as a civil right, then no. I don’t believe that people who are same sex should be able get to married under our laws.

He’s not ready to hop on board the same-sex marriage train, but…what’s that about workplace discrimination? That’s news—and a hint, at least, of a milder tone by the GOP establishment.

As it happens, just last week two GOP senators teamed up with Democrats to announce hearings on the Employee Non-Discrimination Act (ENDA), which is designed to end workplace discrimination against LGBT employees. It passed the House in 2007 but went no further following a veto threat by President Bush; in 2009, it was introduced in the House but stalled. Although Republicans, like Sen. Mark Kirk (R-Ill.), have endorsed ENDA, for the most part it hasn’t garnered broad support within the party. Asked about LGBT discrimination by Scott Keyes of Think Progress, Rep. Allen West (R-Fla.) responded: “That don’t happen out here in the United States of America.” House Speaker John Boehner (R-Ohio) told the Washington Blade:”I haven’t thought much about it.”