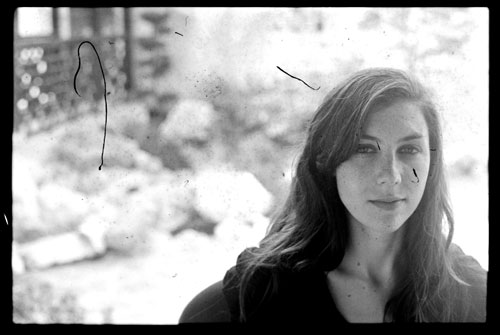 The first time I heard “In the Same Room,” off Julia Holter’s heady new album Ekstasis, it was buried in a playlist of new releases; I had no idea who or what it was, but I knew I had to hear it again—and again, and again, and again. Opening with a drum-machine beat and a melodic synth riff, it’s the poppiest song on the album by far—albeit pop that takes Monteverdi as a muse—and if you’re anything like me you won’t want to listen to anything else for days. The rest of the album hooks you less immediately, but give it a fair chance and it’ll get there.

It’s hard to describe Holter’s music without using the word “ethereal,” but that generic term, conjuring Enya and other New Age-y types, doesn’t really do it justice. It’s in the general vein of experimental indie-pop (though Holter rejects that categorization), but with profoundly classical and ambient elements; it’ll come as no surprise to learn Holter was trained in avant-garde classical composition and keyboard at CalArts. Choral and organ elements in songs like “Marienbad,” another standout, at times border on the gothic or even occult, while “Goddess Eyes II” and “Goddess Eyes I” repeat the vocoder-processed lyric “I can see you/but my eyes are not allowed to cry,” a line taken from the Euripides play that inspired all of Holter’s first album, Tragedy. If that all sounds too solemn and portentous, it’s not, at least not always: on “Für Felix,” for example, Holter is light and chirpy, sing-songing Alice in Wonderland-esque lyrics: “think you’re two feet tall/in the morning time will follow.”

Even the dronier tracks never veer entirely into obscure territory—Holter may jettison traditional song structures, but she retains enough pop elements to keep listeners hooked. “Boy in the Moon” is the album’s most abstract track, clocking in at eight minutes of vaguely foreboding tones layered atop one another, gradually blending into a soft, slightly discordant hum before fading away entirely.

To listen to Ekstasis is to submit to constant shifts in mood; the tone and feel of the album can turn on a dime. What starts out hymnal turns eerie as vocal tracks pile up; Holter’s voice shifts abruptly from drawn out, floating tones to staccato, dissonant bursts; poppy beats break in amid hazy vocals just long enough to get your foot tapping before they cut out again.

To achieve her unique sound, Holter plays primarily keyboard instruments, including harmonium, but dabbles in others as well—though she insists she doesn’t know the cello, for example, she uses it for added drone on recordings. Holter mixes scores of vocal tracks—150 in one song, apparently—ranging from deep bass to high solos to cameos from friends, and sprinkles found sounds and offbeat effects throughout. The result is staggeringly complex; each listen reveals new elements, though trying to catalogue them all seems a nigh-impossible task.

Live, Holter’s music is simultaneously more enigmatic—she plays some songs straight, but others hew to an even less conventional format as she spirals off on tangents—and less mysterious, as you see the ordinary instruments that produce what registers primarily as a swirl of sound in recordings. But Holter is still mesmerizing. Though her songs take cues from choral music and other forms suited for a cathedral, the nuances and layers are best heard in an intimate space. She’s currently touring small clubs in the US and Europe (details here). And if you can’t get to a show, do yourself a favor and watch her performance at Le Poisson Rouge in New York in March on NPR Live.