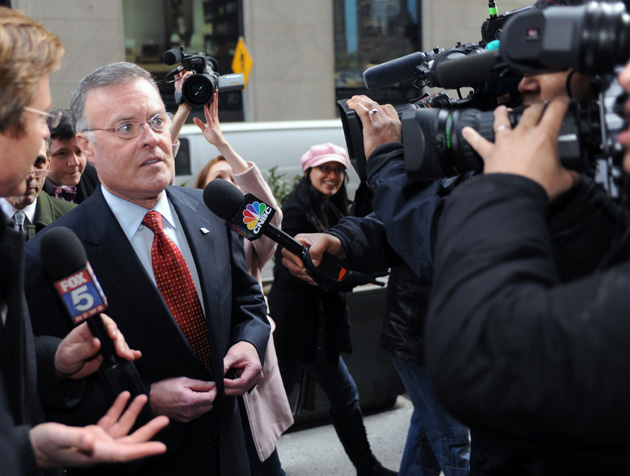 When Bank of America announced it was buying Merrill Lynch in September 2008, bank execs told their shareholders that the merger might hurt earnings a touch. It didn’t turn out that way. Losses at Merrill piled up over the next two months, before the deal even closed. Yet the execs kept painting a prettier picture to shareholders 2014 even though it turns out they knew better.

As the New York Times detailed this morning, a brief in a new lawsuit filed in federal court in Manhattan recounts sworn testimony and internal emails in which execs admitted to giving bad information to shareholders and that they had worried about the legal ramifications of doing so.

According to the filing, Bank of America’s then-CEO Kenneth Lewis admitted in a deposition that what he told shareholders about the financials of the merger was “no longer accurate” on the day they approved it.

We’ve pulled out the most revealing parts of the suit, which tell the story of how the deal went down.

On Sept. 15, 2008, Bank of America announced its agreement to buy Merrill Lynch. In the press release announcing the deal and other presentations, Bank of America said it would cause a 3 percent decrease in earnings in 2009, and that by 2010 the deal would break even or do better.

In October, concerns started to emerge about Merrill’s financials. As it became clear the company was going to lose $7.5 billion that month, one exec emailed another the numbers with the message “read and weep.”

Merrill kept losing money in November. Late that month, Bank of America ordered Merrill to sell off assets to try to stabilize its finances:

After current Bank of America CEO Brian Moynihan admitted in a deposition that this sale meant the deal was less valuable to shareholders:

On Dec. 1, Bank of America issued a $9 billion debt offering. Publicly, they said this was “for general corporate purposes.” But private communications showed that they were trying to raise money to cover Merrill’s losses:

Bank of America’s then-treasurer, Jeffrey Brown, wrote in emails just before the shareholder meeting that they needed to disclose that the Merrill losses were behind the debt offering. He also testified that he told other execs they could be committing a criminal offense by not disclosing the losses:

On Dec. 5, Bank of America shareholders met to decide whether to approve the merger. They questioned Lewis about the financial impact of the deal, and he reassured them:

That day, shareholders voted to approve the merger.

In his deposition for the lawsuit, Lewis said that what he told them was not accurate. Bank of America had already revised their numbers to reflect Merrill’s losses:

Just days after the deal was approved, on Dec. 12, a law firm for Bank of America prepared documents making the case that they could back out of the merger, based on Merrill’s new financial woes:

On the 17th, Lewis took that argument to then Treasury Secretary Henry Paulson and Fed Chairman Ben Bernanke, who, according to the lawsuit, were stunned by Merrill’s losses:

According to the suit, Lewis raised the possibility of a bailout then:

But it wasn’t until January that shareholders 2014 and the public 2014 learned how bad things were. Bank of America stock dropped precipitously, and taxpayers ultimately padded the bank’s bailout funds with an extra $20 billion to cover the losses. The SEC has actually already settled its own charges against Bank of America over misleading shareholders on the deal. The bank paid $150 million 2014 and didn’t admit any wrongdoing.

Bank of America didn’t comment to the Times on the new lawsuit, and didn’t immediately respond to a request for comment from us.