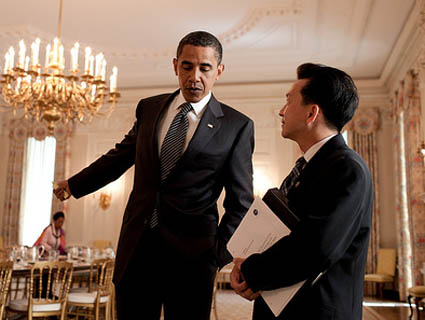 Mitt Romney’s speech on immigration policy before the National Association of Latino Elected and Appointed Officials on Thursday avoided the two big questions regarding immigration reform. Voters still don’t know what Romney would do with the approximately 11 million undocumented immigrants already in the US. Last week, President Barack Obama announced a new Department of Homeland Security directive granting work authorization and temporary stays of deportation to certain young illegal immigrants brought to the United States as children. But voters don’t know what Romney would do with those people, either.

Jennifer Rubin, the Washington Post‘s pro-Romney blogger, is deeply upset that reporters have pointed out that the Romney speech was evasive. She has lashed out at the media for “spinning” for the White House, contending that “Mitt Romney came out with his own immigration plan, which was broader than the president’s”:

The hypocrisy is jaw-dropping. Where is Obama’s solution? Well, wink-wink, he wants simply to legalize all of them, his defenders say. Oh really, then why not say so? And would they be citizens? There is a gulf as wide as the Grand Canyon between what Obama has hinted at and what he has done or even articulated in a reelection campaign.

The White House’s position on both of these matters is available to anyone with access to a web browser and the ability to use Google. The Obama administration pushed for the DREAM Act in 2010 only to see it filibustered to death by Senate Republicans and a few Democrats. The White House’s Blueprint for Immigration Reform states that the president favors a path to legalization for undocumented immigrants in the US provided they “register and undergo national security and criminal background checks.” They will also have to “pay their taxes, pay a fine, and fully integrate into the United States by learning English.” Obama also supported the immigration reform plan put forth by Senators Chuck Schumer (D-NY) and Lindsey Graham (R-SC) that Graham subsquently abandoned.

That’s not to say Romney’s speech offered nothing of value. He stated very clearly Thursday that “we may not always agree, but when I make a promise to you, I will keep it.” During the primary, Romney committed himself to a policy of forcing out undocumented immigrants through “self-deportation,” and pledging to veto the DREAM Act. Voters who care about immigration policy should take Romney at his word that he’ll keep those promises.