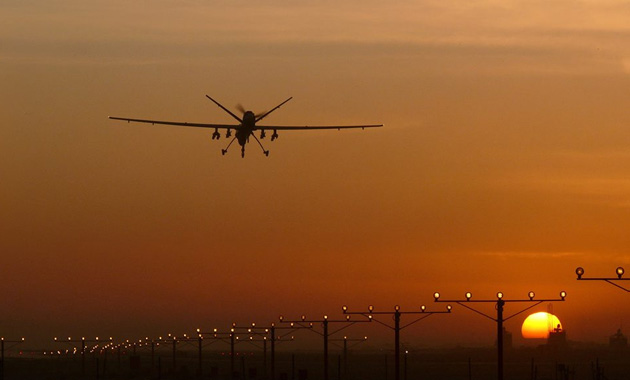 Everyone is talking about drones. Also known as Unmanned Aerial Vehicles, or UAVs, remote-piloted aircrafts have become a controversial centerpiece of the Obama administration’s counter-terrorism strategy. Domestically, their surveillance power is being hyped for everything from fighting crime to monitoring hurricanes or spawning salmon. Meanwhile, concerns are cropping up about privacy, ethics and safety. We’ve rounded up some of the best coverage of drones to get you oriented. Did we miss anything? Let us know.

The idea of unmanned flight had been around for decades, but it was in the 1990s, thanks to advances in GPS and computing, that the possibilities for drones really took off, as the New Yorker recently recounted. While hobbyists and researchers looked for uses for automated, airborne cameras, the military became the driving force behind drone developments. (This history from the Washington Post has more details) According to the Congressional Research Service, the military’s cache of U.A.V.’s has grown from just a handful in 2001 to more than 7,000 today. This New York Times graphic shows the variety of drones currently employed by the military 2014 from the famous missile-launching Predator to tiny prototypes shaped like hummingbirds.

This February, Congress cleared the way for far more widespread use of drones by businesses, scientists, police and still unknown others. The Federal Aviation Administration will release a comprehensive set of rules on drones by 2015.

As the ground wars in Iraq and Afghanistan wind down, the Obama administration has escalated a mostly covert air war through clandestine bases in the U.S. and other countries. Just this week, the administration’s drone-driven national security policy was documented in this book excerpt by Newsweek reporter Daniel Klaidman and a New York Times article.

Both the CIA and military use drones for “targeted killings” of terrorist leaders. The strikes have been an awkward open secret, remaining officially classified while government officials mention them repeatedly. Obama admitted the program’s existence in an online chat in February, and his counterterrorism advisor, John Brennan, gave a speech last month laying out the administration’s legal and ethical case for drone strikes.

The crux of it is that they are a precise and efficient form of warfare. Piloted from thousands of miles away (here’s an account from a base outside Las Vegas), they don’t put U.S. troops at risk, and, by the government’s count, harm few civilians.

How Many Civilians Do Drone Strikes Kill?

Statistics are hard to nail down. The Long War Journal and the New America Foundation track strikes and militant and civilian deaths, drawing mainly on media reports with the caveat that they can’t always be verified. The Long War Journal tallied 30 civilian deaths in Pakistan in 2011. The London-based Bureau of Investigative Journalism, which also tracks drone strikes, consistently documents higher numbers of civilian deaths 2014 for Pakistan in 2011, at least 75. Obama administration officials, the New York Times reported this week, have said that such deaths are few or in the “single digits.”

But the Times, citing “counterterrorism officials,” also reported that the U.S. classifies all military-age men in a drone strike zone to be militants, unless their innocence is proven after the attack. If that’s true, it raises questions about the government statistics on civilian casualties. One State Department official told the Times that the CIA might be overzealous in defining strike targets 2014 he told them that “the joke was that when the C.I.A. sees ‘three guys doing jumping jacks,’ the agency thinks it is a terrorist training camp.

What About the Political Fallout?

The U.S. has also used airstrikes to side-step legal arguments about the boundaries of the campaign against al Qaeda. Both Bush and Obama administration officials have argued that Congress’ September 2001 Authorization for Use of Military Force extends to al Qaeda operatives in any country, with or without the consent of local governments.

Drone strikes are extremely unpopular in the countries where they’re deployed. They’ve led to tense diplomatic maneuvers with Pakistan, and protests and radicalization in Yemen. Iraqis have also protested the State Department’s use of surveillance drones in their country.

Domestic concerns about civil liberties and due process in the secret air war were inflamed last fall, when a drone strike in Yemen killed Anwar al Awlaki, an al Qaeda member and a U.S. citizen. Weeks later, Awlaki’s 16-year-old American son was also killed by a drone.

Drones are cheap relative to most military manned planes, and they were a central feature of the Pentagon’s scaled-back budget this year. But drones aren’t immune from cost overruns. The latest version of the Global Hawk surveillance drone was put on the back-burner this January after years of expensive setbacks and questions about whether they were really better than the old U-2 spy planes they were slated to replace.

And while drones may not carry pilots, they can still crash. Wired has also reported on drones’ susceptibility to viruses.

Another problem? The Air Force is playing catch-up trying to train people to fly drones and analyze the mountains of data they produce, forcing them to sometimes rely on civilian contractors for sensitive missions, according to the LA Times. The New York Times reported that in 2011, the Air Force processed 1,500 hours of video and 1,500 still images daily, much of it from surveillance drones. An Air Force commander admitted this spring that it would take “years” to catch up on the data they’ve collected.

There are already a number of non-military entities that the FAA has authorized to fly drones, including a handful of local police departments. How drones might change police work is still to be determined (the Seattle police department, for example, showed off a 3.5-pound camera-equipped drone with a battery life of a whopping 10 minutes.)

Police drones may soon be more widespread, as the FAA released temporary rules this month making it easier for police departments to get approval for UAVs weighing up to 25 pounds, and for emergency responders to use smaller drones. The Department of Homeland Security also announced a program to help local agencies integrate the technology 2014 principally as cheaper and safer alternatives to helicopters for reconnaissance. The Border Patrol already has a small fleet of Predators for border surveillance. (The LA Times has more on the Customs and Border Protection’s use of drones in the interior, during floods and fires, and on criticisms of drones’ success in stopping illegal border activity.)

Law enforcement officials are staving off a backlash from privacy advocates. The ACLU and other civil rights groups have raised concerns about privacy and Fourth Amendment rights from unprecedented surveillance capability 2014 not to mention the potential of police drones armed with tear gas and rubber bullets, which some departments have proposed. Congressmen Ed Markey, D-Mass., and Joe Barton, R-Texas, co-chairs of the Congressional Privacy Caucus, have asked the FAA to address privacy concerns in their new guidelines.

One of the first drone-assisted arrests by a local police department took place in North Dakota this year, with the help of a borrowed DHS Predator. It was deployed, as the New Yorker detailed, to catch a group of renegade ranchers in a conflict that originated over a bale of hay.

Universities actually have the most permits to fly drones at this point, for research on everything from pesticide distribution to disaster preparation. As Salon points out, the Pentagon and military contractors are also big funders of university drone research.

The Electronic Frontier Foundation, an advocacy group that has been outspoken about privacy concerns related to drones, put together the map below of entities authorized to fly drones by the FAA.

Get Your Own Drone!

Could you, too, become the proud owner of a drone? At the low-end, a drone can be a glorified model helicopter, and there’s a dedicated community of DIY-drone builders. This fall, a group from Occupy Wall Street tried to use the “Occucopter” do their own surveillance of police movements.