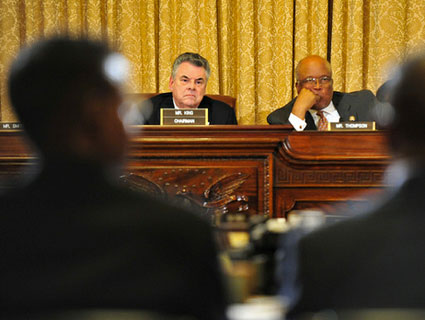 After spending the last year and a half holding hearings on “radicalization” within the American Muslim community, House Homeland Security Committee Chairman Peter King (R-N.Y.) is preparing to hold hearings on his hearings.

On Wednesday afternoon, King announced his latest meta-hearing, titled “The American Muslim Response to Hearings on Radicalization Within Their Community.” It’s scheduled for June 20. What’s next? A hearing on the Muslim community’s response to the hearing on the earlier hearings?

But how “radicalized” is the American Muslim community? Not very, according to a recent study from the Triangle Center on Terrorism and Homeland Security. Last year, there were fewer than 20 indictments related to Islamic extremism, and not a single American was killed in the United States as a result of Islamic terrorism. The spike in homegrown terrorism in 2009 that thrust the issue to the center of American politics has continued to subside, dropping from nearly 50 cases to under 20. And the wave of violent radicalization that King has warned Americans about hasn’t happened.

All signs point to Al Qaeda being on the defensive—especially in the United States. “The feds are getting better at uncovering plots and support for terrorism, and yet the number of arrests is still declining,” explains Will McCants, a former counterterrorism adviser to the State Department. “That puts the exclamation mark on the [Triangle Center] study’s findings that radicalization is not a large-scale problem in this country.”

The few incidents that do occur, though, tend to draw a great deal of attention. Worldwide, only 17 American civilians died in terrorist attacks last year, prompting the Council on Foreign Relations’ Micah Zenko to point out that Americans have about an equal chance of being crushed to death by their own furniture as they do of dying in a terrorist attack.

Aside from the small and declining number of domestic attacks, other findings in the Triangle Center study also bring King’s priorities into question. King held a hearing on Islamic radicalization in prison, but fewer than a tenth of the suspects involved in domestic terror plots spent any time in prison.

Al-Shabaab, the Somali terror group that recently formally joined Al Qaeda, saw its pool of American recruits dry up as federal agents dismantled its recruitment operation in Minnesota. Although Al Qaeda has sought to use the internet to convert American Muslims into lone-wolf terrorists, few have answered the call, and those that do lack the capacity to organize the kind of elaborate operations the group was once capable of.

“Al Qaeda’s strategy is to hope people will read something and carry out an attack,” says Clint Watts, a former executive officer of the Combating Terrorism Center at West Point who writes at Selected Wisdom, a blog focused on counterterrorism issues. “That’s hope, that’s not a strategy.”

The bottom line: More than a decade after killing 3,000 Americans, the world’s most dangerous terrorist group has been reduced to using the internet to beg strangers to fulfill its wishes.

King’s latest hearing, however, is a reminder that even as homegrown terrorism is on the wane, suspicion of Muslims endures. Civil liberties advocates and Arab and Muslim groups still complain that they’re unfairly singled out for blanket surveillance by law enforcement. Federal guidelines held over from the Bush administration allow the FBI to consider race and religion in investigations, and many recent terrorism indictments have involved sting operations that some civil liberties groups consider legally problematic. The NYPD is being sued over its surveillance of Muslim communities in New Jersey. The conspiracy theory that American Muslims are plotting to replace the Constitution with Taliban-style Islamic law remains popular with conservatives.

The Triangle Center study is a sign that “America works, that all our ethnic and religious communities are fitting into the fabric of American society,” says James Zogby, founder of the Arab-American Institute. “[The study] calls into question the raison d’etre of the Peter King hearings.”

Clint Watts, echoing House Democrats’ criticisms of the hearings, argues that the disproportionate focus on Islamic extremism in the United States is obscuring other threats. The most sophisticated explosive device in a recent homegrown terrorism plot, he notes, was not put together by a Muslim extremist. It was constructed by Kevin Hapham, the white supremacist who tried to bomb a Martin Luther King Day parade in Spokane, Washington, in 2010. King and others have feared that “Al Qaeda operatives are going to come over here and use improvised explosive devices,” Watts says. “Guess what: it didn’t happen. Who did it? An American who lived in Washington.”