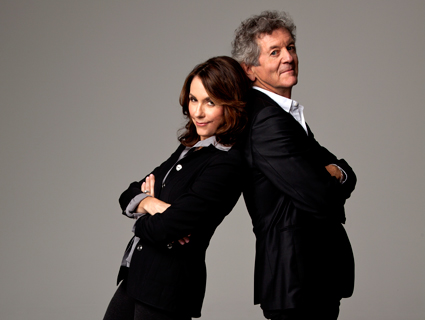 “I love my big sister so much. She’s also the most nerve-wracking bitch on the planet.” The writer and poet Mary Karr—known for her bestselling memoir, The Liar’s Club—gazes out at the audience without so much as blinking as she flays her relatives live onstage at Berkeley’s Freight & Salvage Coffeehouse.

Most of her revelations will be like this one—at the same time caring and raw, usually darkly funny. She shares the stage with Grammy-winning country singer-songwriter Rodney Crowell, her cowriter on the new album Kin, which also features music heavyweights Lucinda Williams, Lee Ann Womack, Norah Jones, and Rosanne Cash, Crowell’s ex-wife.

Crowell teamed up with Karr after reading The Liar’s Club and name-checking her in his 2003 song, “Earthbound.” “We realized there was a little thread,” Karr explained of the collaboration.”Songs that mostly involve the people you wanna drag behind your car—your family.”

Both artists had written previously about their upbringings; Crowell reflects on his alcoholic dad and zealously religious mother both in his songs and in a memoir titled Chinaberry Sidewalks. Karr wrote about her psychotic mother and her family’s troubles with liquor in her acclaimed books, which also include Cherry and Lit. Stringing together their bony memories, the pair created songs that are tender, bluesy, and full of phrases and fragments from East Texas, where both were raised.

Pre-show, the Freight’s intimate hollow echoed with the measured murmur of a mature crowd who’d witnessed many a mosh pit and dazed festival back in the day but were now ready to settle back and bask in acoustic folk instead. I may have been the youngest in the audience by 20 years, and I’ll admit I knew little about Crowell beforehand.

I later found out that he won a Grammy in 1989 for his song “After All This Time,” the video of which has him sporting a serious mullet. Crowell charted five consecutive No. 1 hits with his album Diamonds and Dirt, and recently made it into the Songwriters Hall of Fame. Though revered in the country world, many of his major artistic contributions were behind-the-scenes: Big stars like Johnny Cash, Tim McGraw, and Jones have recorded his songs.

Tonight Crowell is a total sweetheart, all gentlemanly and earnest, with a voice like a soft sweater. Steuart Smith, the gifted lead guitarist from this little band you may have heard of called the Eagles, joins him on stage (which may help account for the packed house).

“I know you all think I’m just here because I’m sleeping with the band,” Karr tells the audience.

After a few songs from these graying rockers, Karr struts into the scene, pure firecracker. “One of the finest, most muscular writers I know,” says Crowell by way of introduction.

“I know you all think I’m just here because I’m sleeping with the band,” comes Karr’s reply, her slight frame accented by russet hair and a blue blouse. Thus the evening continued—Crowell delivering heartfelt songs, Karr chiming in with her biting wit, and flouncing around the stage like a Southern belle who’s abandoned the ball for a little tobacco chewing.

In one of the performance’s many interludes, Karr recalls the day her mother was hauled off to a mental institution. “The goal in my neighborhood was to educate you on how crazy your life was,” she says. “Crazy as a mudbug, nutty as a fruitcake.”

Her father trained her to bite back when other kids pestered: “Lay the ivory to ’em, Pokey!” he’d say. On one occasion, when a kid messed with her sister (“knocked her out, cold as a witch”), Karr mounted a tree with her BB gun to wait on the attacker. The boy was out walking with his dad, and as soon as she shot at the pair, the father peered up in the tree and asked, “Is that you, Mary Karr, up there?” The young girl’s response: “Eat me raw, mister!”

“Those hairy legged boys/stop making all that noise/when you beat ’em in the dirt without blinking.”

At this, the audience roars. “I had no idea what this meant. It had caught my mind as a variation of kiss my ass,” Karr explains.

Karr’s admiration for her sibling inspired “Sister Oh Sister,” sung by Roseanne Cash on Kin. “Those hairy legged boys/stop making all that noise/when you beat ’em in the dirt without blinking,” begins one verse. “Sister, big sister/you’ve been my seawall/you’ve been my flood/you’re in my blood/I thank God for you.”

It’s this combination of grit and hilarity and sincerity that make Crowell’s and Karr’s songs feel so true. The richness of the memories combines with the universal frustrations and bonds that families inspire. The melodies on Kin are often simple, the stories far more complicated and lyrical, tinged with emotion and regret. “If I could cross a bridge from now to then/open up my chest and let it in/I wouldn’t fight so hard against the pain/I’d let it rain,” croons the narrator in “Long Time Girl Gone By,” sung by Emmylou Harris.*

By halfway through the show, Karr has punctuated the music with her stories, but still hasn’t opened her mouth to sing. “I’d sooner drop my pants,” she tells the audience as one attendee calls out for it. This turns out to be a ploy, as she later joins Crowell on harmony for one song, and even sings some solo, including a new tune that starts, no joke: “I hate that big fat bitch that had you birthed.”

“Nothing brought my family together like divorce,” Karr adds with a sugary drawl.

Alone, Crowell risks being overly sincere, and Karr perhaps too sarcastic. Onstage, they complement one another, the peppering of humor making the serious bits cut all the deeper. In a video about the project, Crowell credits Karr’s poetic sensibilities with making the songs more unique.

And it’s clear that Karr, who perhaps would have never entered into music without Crowell’s urging, has found a new avenue of expression. She says:

To me [music] is the most exalted form because it’s where form and content are completely interwoven. A note doesn’t mean anything except for in the context of other notes. So you’re kind of creating a new language with every song.

Correction: An earlier version of this article said that “Long Time Girl Gone By” was sung by Lucinda Williams.