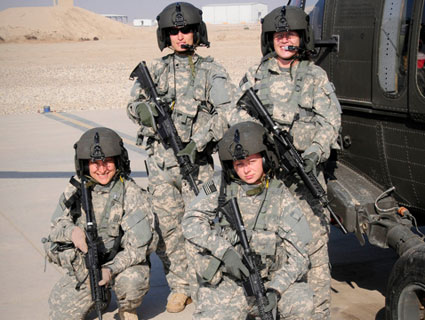 Republican Senators John McCain, Scott Brown, and Susan Collins all support an effort by Sen. Jeanne Shaheen, a Democrat from New Hampshire, to expand abortion access for military women who are raped. But despite bipartisan support in the Senate, Shaheen’s proposal may not make it into the final version of the 2013 defense authorization bill—because House Republicans oppose it.

If Shaheen’s measure passes, military families will finally have the same access to abortion that other federal employees already receive. Unlike the rest of the federal government, the Department of Defense currently only provides abortion coverage if the life of the mother is at stake. Under current law, if a State Department employee is raped, her government health insurance plan will pay for an abortion if she wants one. But if an Army medic serving in Afghanistan is raped and becomes pregnant, she can’t use her military health plan to pay for an abortion. If she does decide to get an abortion, she will have to pay for it with her own money. And if she can’t prove she was raped—which is difficult before an investigation is completed—she may have to look for services off base, which can be dangerous or impossible in many parts of the world.

“We have more than 200,000 women serving on active duty in our military,” Shaheen tells Mother Jones. “They should have the same rights to affordable reproductive health services as all of the civilians who they protect.”

In late May, the Senate Armed Services Committee approved Shaheen’s amendment, attaching it to the 2013 National Defense Authorization Act. McCain, the committee’s top Republican, voted in favor, as did Brown and Collins. Shaheen is “hopeful” her proposal has enough support to be included in the final bill. The NDAA still needs a vote on the Senate floor. But for Shaheen’s amendment, there’s a bigger problem: the Republican-controlled House.

“We don’t really understand why anybody would oppose [Shaheen’s bill],” says Sharon Levin, the director of federal reproductive health policy at the National Women’s Law Center. “The only reason it wouldn’t go through is if the Republican leadership in the House tried to block it.”

That appears likely. A GOP staffer “familiar with defense issues” told Army Times last week that the Shaheen amendment “stands little chance of surviving” when the House and Senate meet to work out their differences on the defense bill. “Historically, social provisions that are not reflected in both bills heading into conference don’t survive,” the staffer said—conceding that the House version of the defense bill will not include anything like Shaheen’s proposal.

Shaheen says the story of a young woman stationed in Korea who was raped by a fellow soldier demonstrates why this law needs to be changed. The woman’s military health insurance wouldn’t cover an abortion, and she could not find a safe place to have one off base. In the end, she lost her job, and later had a miscarriage. “This is somebody who wanted to make the military her career, and she was ultimately forced out because of a situation that was not of her making,” Shaheen says. “Most of the women affected here are enlisted women who are making about $18,000 a year. They’re young, they don’t have access to a lot of resources. Many of them are overseas.”

Current Pentagon policy is more restrictive than the 1976 Hyde Amendment, which prohibits federal funds from being used to provide abortion services except in the case of rape, incest, or if the woman’s life is endangered. The DOD enacted its stricter, life-of-the-mother-only limit on abortions in 1979. In 1988, the law was tightened again—Congress now forbids women from using their own money to pay for abortions in military health centers unless they are a victim of rape or incest, or if their life is at risk.

The military reported 471 rapes of servicemembers in 2011 alone. The true number is likely far higher—the Pentagon’s Sexual Assault Prevention and Response Office estimates that only about 13.5 percent of all rapes and sexual assaults in the military are actually reported. The Women’s Health and Rights Program at the Center for American Progress estimates that several hundred women in the military become pregnant as a result of rape each year.

But despite numerous reform efforts over the past several decades, including failed proposals in 2010 and 2011, the Pentagon’s strict anti-abortion policies endure today.

Shaheen hopes that this year will be different. The Stand with Servicewomen campaign, organized by retired military men and women in partnership with a coalition of civil and reproductive rights groups, is backing her effort. “When a woman comes in the military comes in the military, she’s guaranteed health care,” says Col. Elizabeth Fleming, a retired Army veteran who now practices law in Alaska, who was in DC recently to lobby senators on Shaheen’s amendment. “If this is excluded, she’s not getting it.”

Another vocal vet is Joellen Oslund, who became the Navy’s first woman helicopter pilot in 1974, and in 1993 was one of the first female aviators promoted to the rank of captain. Now retired, she says she hopes that granting access to abortion care for women in the military—at least for victims of rape—will be relatively non-controversial. “We lost these privileges and these rights a little bit at a time, we’re going to have to get them back a little bit at a time,” Oslund says. “This is the one piece that’s probably the least controversial, and helps the most people.”