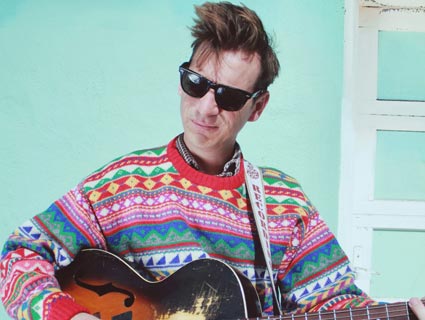 Breakups inspire change. For some people, that means a haircut. For Sonny Smith, the prolific Bay Area-based troubadour and playwright behind infectious folk-pop outfit Sonny & the Sunsets, it was a country album.

Before Longtime Companion, the Sunsets enjoyed a reputation for easily digestible quirk and ineffably satisfying pop songs. Their last full-length album, Hit After Hit, gathered praise within the critical indie bubble for the sweet, unadorned straightforwardness at which Smith is a seasoned pro. In addition to a decade of creative residencies, work on short films, and musical collaborations with the likes of Miranda July, Neko Case, Jolie Holland, and Wilco’s Leroy Bach, one of Smith’s most ambitious projects was to create 100 fictional bands and 100 fictional 7″ records—for which he then wrote the music. All 200 songs ended up on a jukebox at the gallery show displaying the 100 works of album art.

When Smith emailed the Sunsets’ old record label with a pained country album that he had written over the end of a decade-long relationship, however, the label said “no, thanks.”

At first listen, I could understand why. Longtime Companion‘s opening track hits like the breath of a drunk guy at the bar who leans in a little too closely to tell you his story. It’s loose, unpolished, and pretty much a 10-gallon hatful of cartoonish country. What’s even more uncomfortable is the tension between the cheery, shuffling guitar and the darkness of Smith’s lyrics. “Try to move through the door / but I don’t move fast / Try to see my reflection/ but it’s only painted glass,” Smith croons. Then, “Well I know I was born, but am I really here?” he asks. “Baby, am I really here?”

That’s how it starts. But Smith wrote his album while the breakup was in progress, which might explain the changes in tone throughout. By track 3, Smith and the Sunsets (fortified with Smith’s country band, The Fuckaroos) reach a relaxed, less absurd level of twang. “Pretend You Love Me” evokes the romantic, poised kind of sorrow that one might hope to maintain through heartbreak. Then there’s “I See The Void, which offers a breather from the western pastiche, and a glimpse of the old, familiar Sunsets. The last few songs on the record resolve into a harmonic Pure Prairie League kind of finish, and the final cut, “Longtime Companion,” strays towards early Billy Joel.

“It makes perfect sense,” Smith says of the aesthetic. “You’re sad, you have something kind of hard to talk about, and it’s easier to pick up a guitar, drink some wine, and strum out some country songs. It makes more sense than if I had joined a death metal band.”

If cowboys aren’t your cup of tea, it’s not an easy experience. After all, ending relationships can be ugly, conflicted, and full of oversharing. Maybe we need musicians like Sonny Smith to show their blood on the tracks. But for what it’s worth, Smith says his next record will be a little less country, and a little more typical Sunsets folk-rock and roll.