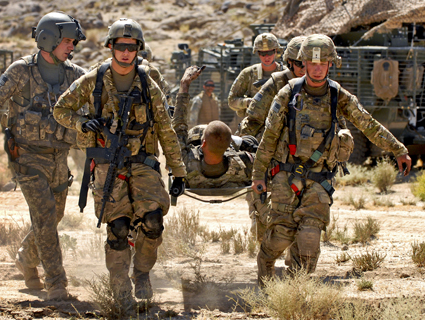 A soldier wounded by a roadside bomb is evacuated from the Kandahar provinceCourtesy of <a href=http://www.army.mil/yearinphotos/2011/june.html>US Army</a>

A military analyst hunches over a laptop. His screen flashes with real-time data of the war unfolding on the sands outside his base. The machine hums and then quickly spits out a color-coded map forecasting impending violence. Eyeing the contours, he radios a caravan of humvees and informs the soldiers that, according to the calculations, they will be ambushed in roughly twelve hours. The unit veers onto a bushwhacked road, lies in wait, and at the crack of dawn captures its would-be attackers without taking any injuries.

A sci-fi writer’s napkin scribblings? Or a peek at the future? Well, according to research published earlier this month in the Proceedings of the National Academy of Sciences, such a scene might not be far off.

Drawing from the 77,000 confidential US military logs released in Wikileaks’ Afghan War Diary, researchers compiled data tracking the activity of armed opposition groups (AOG) in Afghanistan between 2004 and 2009. They then used “spatiotemporal” statistics to model the intensity and location of future violence, down to the provincial level, through the end of 2010 (a year after the leaked data ends). A comparison of the results with safety reports from the Afghanistan NGO Safety Office showed that their predictions were strikingly accurate:

The scientists were dumbfounded by the precision of their model.

“The model does not have any knowledge of military plans/ political initiatives/ etc.,” coauthor and University of Edinburgh lecturer Guido Sanguinetti told Mother Jones in an email. “In a sense the model is data-driven, without much expert input; the fact that it could give statistically accurate predictions was quite exciting. Having been in Britain for many years, I may have actually said, ‘Blimey.'”

“The fact that it could give statistically accurate predictions was quite exciting. Having been in Britain for many years, I may have actually said, ‘Blimey.'”

Even more surprisingly, the calculations were not run on expensive supercomputers. While the researchers boast that their algorithm produces powerful results, it can be run on standard PCs. Given a laptop and an hour, they say, and these kind of calculations could one day feasibly provide provide on-the-ground war zone predictions.

Sharon Weinberger pointed out last year in Nature that the Pentagon planned to spend at least $28 million on computer modeling in 2011, reviving a military interest in predictive technologies that dates back to the 1970s. Government-funded researchers are notably cautious about the results to date. “I would say the weather guys are far ahead of where we are,” University of Maryland computer scientist Venkatramanan Subrahmanian, who has worked on modeling the locations of arms caches, told Weinberger. “And that might give you some relative understanding of where the science is.”

The scientists behind the PNAS study believe their current models could be further refined by adding data on military strategy. That would help the researchers define the statistical relationship between the opposing forces and better gauge insurgents’ future actions.

Coauthor Andrew Zammit-Mangion also notes that the team hopes to advance the precision of their algorithm, so it can predict the specific location of attacks within provincial limits. “Technically, there is no limit as to how much we can ‘zoom in,'” he writes Mother Jones. If the scientists overcome some mathematical hurdles, they could potentially predict violence down to a city block, or, perhaps, even a bushwhacked desert road.