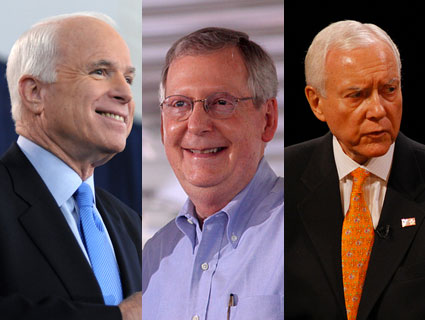 On Monday evening, Senate Republicans blocked a vote on a bill that would force corporations, unions, and shadowy nonprofits such as Karl Rove’s Crossroads GPS to reveal the biggest donors behind their political ads. The vote was 51 to 44.

The goal of the DISCLOSE Act of 2012, introduced by Sen. Sheldon Whitehouse (D-R.I.), is simple: Shine light on the dark money in American elections. The bill requires unions, corporations, and nonprofit organizations to report any campaign-related spending over $10,000 within 24 hours and to name donors who give $10,000 or more for political purposes. The bill also calls for an end to using shell corporations to mask donors’ identities, a tactic used by former Bain Capital director Ed Conard, who funneled $1 million through a shell company to the pro-Romney super-PAC Restore Our Future last year.

Cosponsored by 27 Democratic senators and supported by a dozen outside transparency groups, including Public Citizen, Common Cause, and the League of Women Voters, this latest version of DISCLOSE has been scaled back from one Republicans filibustered in 2010 and another Whitehouse introduced this spring. (DISCLOSE stands for Democracy Is Strengthened by Casting Light On Spending in Elections.)

This time around, the bill was crafted to avoid favoring labor unions, a pillar of funding and support for Democrats, by making them subject to the same disclosure requirements as corporations and nonprofits. The bill’s authors also worked hard to avoid infringing on constitutionally-protected forms of speech, focusing solely on disclosing donations—a nod to Supreme Court Justice Anthony Kennedy’s majority opinion in Citizens United, which asserted that disclosure “provides shareholders and citizens with the information needed to hold corporations and elected officials accountable for their positions and supporters.”

Before the vote, numerous Senate Democrats took the floor to rail against the increase in undisclosed political giving. “All the DISCLOSE Act would do is shed light on who’s giving money,” said Sen. John Kerry (D-Mass.). “It oughta receive unanimous support.” Kerry later added, “What could be more American than allowing the American people to know who’s trying to speak to them?”

Pro-disclosure advocacy groups say the flow of undisclosed money in elections harkens back to the days of Watergate, when secret donations funded everything from sabotage campaigns to Nixon’s reelection effort. “Today, a new, national campaign finance scandal is unfolding before the American people as massive secret, unlimited contributions return to our elections,” said Fred Wertheimer, president of the pro-reform organization Democracy 21, in a statement.

“What could be more American than allowing the American people to know who’s trying to speak to them?” asked Sen. John Kerry.

Whitehouse pledged to continue the debate on the DISCLOSE Act through the night and into Tuesday morning. Joining Whitehouse during his “midnight vigil” for DISCLOSE will be Senators Tom Udall (D-N.M.), Jeanne Shaheen (D-N.H.), Jeff Merkley (D-Ore.), Michael Bennet (D-Colo.), and Al Franken (D-Minn.). “We recognize that you don’t win every fight in round one, and this is a fight worth continuing,” Whitehouse said in a statement Monday morning.

Senate Minority Leader Mitch McConnell (R-Ky.), a longtime foe of campaign finance reform, led the effort to block the vote on the bill. McConnell blasted the bill as a distraction from more pressing economic concerns and claimed it was a way for Democrats to intimidate and silence donors and critics. “The purpose of this legislation is totally clear,” McConnell said. “After Citizens United, Democrats realized they couldn’t shut up their critics. So they decided to go after the microphone instead by trying to scare off their funders.”

Sen. Orrin Hatch (R-Utah) also slammed the bill as a deliberate effort to intimidate Democrats’ political opponents. (The US Chamber of Commerce, which does not disclose its donors, has spent $95,000 on Hatch’s behalf this year.) Sen. John McCain (R-Ariz.), who along with Sen. Whitehouse had filed a brief urging the Supreme Court to revisit its Citizens United ruling, joined his Republican colleagues to block the DISCLOSE vote.

McConnell’s opposition to the bill’s disclosure provisions clashes with his past support for greater disclosure of campaign giving and spending. In 1990, he said he’d introduce legislation requiring political action committees backing multiple candidates to name their donors. In 1997, McConnell wrote in the Lexington Herald-Leader that disclosing campaign donors and spending “should be expedited so voters can judge for themselves what is appropriate.” And in 2000, McConnell said on NBC’s Meet the Press that “Republicans are in favor of disclosure.”

Republicans have taken heat for previously supporting disclosure only to vote against the DISCLOSE Act. Fred Hiatt, the Washington Post‘s editorial page editor, wrote on June 17 that the GOP’s strategy amounted to a bait-and-switch: First, GOPers called for unlimited donations and full disclosure, but they abandoned disclosure once super-PACs and politically active nonprofits became the norm. “Will any Republicans,” Hiatt asked, “have the civic courage to remember where they stood a few years back?”