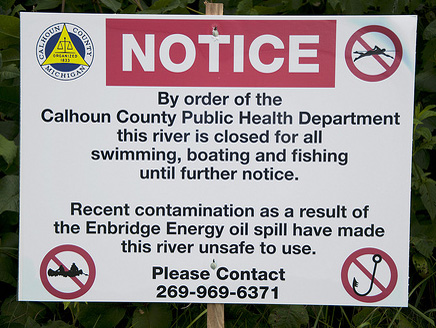 Just ahead of the two-year anniversary of the giant oil spill in Michigan, the federal government has handed down a $3.7 million fine and a notice of 24 violations to the Canadian company responsible for the pipeline.

The July 2010 incident dumped upwards of 20,000 barrels of diluted bitumen—a heavy form of petroleum—into the Talmadge Creek, a tributary of the Kalamazoo River. The Department of Transportation’s Pipeline and Hazardous Materials Safety Administration said it is the largest fine the office has ever assessed. The company was also cited for failing to address corrosion in the pipeline, and for not responding fast enough to the spill.

But as Anthony Swift, an attorney with the Natural Resources Defense Council, points out, even that record fine probably isn’t enough to make pipeline operators fix problems:

At $3.7 million, federal pipeline regulators are proposing the largest fine in the agency’s history for noncompliance with minimum safety standards – and yet it’s a tiny fraction of what compliance will cost Enbridge. Nearly a year after the Kalamazoo River spill, Enbridge announced that it would finally replace 75 miles of corroded pipeline on its Line 6B pipeline at an expected to cost $286 million. In this context, the PHMSA fine hardly amounts to a slap on the wrist, amounting to a small cost of doing business than a meaningful incentive to make the business decision that protects the public and environment.

Of course, the cost of the Kalamazoo spill, at over $750 million, far exceeds both PHMSA’s paltry fining authority as well as the cost of replacing corroded pipe and complying with regulations. However, remember that the Kalamazoo River tar sands spill was an order of magnitude greater than the worst case spill scenario anticipated by Enbridge. Overly optimistic risk assessments seem to permeate the pipeline industry. The National Transportation Safety Board (NTSB) found overly optimistic risk assessments to be one of the causes of the tragic, and preventable, San Bruno explosion which killed eight people.

For more on the Enbridge spill, see Inside Climate’s excellent three-party series on the incident and its lasting impacts or this piece from Ted Genoways on a whistleblower who has been on a crusade to get the company to clean up its act. It’s also worth noting that Enbridge has a history of spills in the US. Will a record fine lead to any changes at the company?