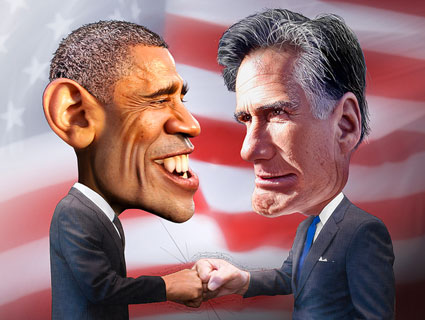 Barack Obama and Mitt Romney are bickering over who is the bigger fan of outsourcing. The Obama campaign has accused the private equity firm Romney owned and founded, Bain Capital, of “pioneering” outsourcing with its investments in companies that moved manufacturing overseas. Romney has claimed that he left Bain before jobs were outsourced and countered that Obama’s the real “outsourcer in chief” for investing government funds in energy companies that went on to hire workers abroad.

Nevertheless, neither candidate is actually outraged over outsourcing. Romney has strenuously denied the charges that he misled the public about his role at Bain after leaving to run the Olympics, but he’s never said that outsourcing is wrong or that he would have done things differently. Obama has attacked Romney over wanting to “keep giving tax breaks to companies that ship jobs overseas,” but as Reason‘s Peter Suderman noted, he’s previously acknowledged that “we can try to slow globalization, but we can’t stop it.” The candidates are battling for a populist mantle, but neither subscribes to the underlying principles.

“Both candidates recognize that in globalization, offshoring happens,” says Jared Bernstein, a former economic adviser to Vice President Joe Biden who is now a senior fellow at the Center for Budget and Policy Priorities. “Both candidates are generally favorable towards globalization. These are not protectionist people.” Outsourcing often leads to companies moving jobs out of the United States, but it also makes consumer goods cheaper to buy by making them cheaper to produce. Neither candidate has proposed trying to fundamentally alter that dynamic.

“I think their basic view is pretty much the same,” says Dean Baker, the cofounder of the left-leaning Economic Policy Institute. Dan Ikenson, a trade expert with the libertarian Cato Institute, agrees. “Both the president and Mr. Romney understand that outsourcing is an unobjectionable fact of life, that the process generates large net benefits for Americans, and that attempts to restrict outsourcing would have deleterious effects on the US economy,” Ikenson says. “However, both campaigns have decided, thus far, that it is easier to demagogue the issue and label the opponent as the bigger outsourcer than it is to explain how outsourcing works.” That’s because Romney doesn’t want to look like a callous moneybags to American workers, and Obama doesn’t want to undermine the image of the populist he plays on TV. So the détente serves both sides.

Where the candidates do differ is on how they want to respond to outsourcing—especially when it comes to tax policy. The Obama campaign has proposed ending tax incentives for companies that move jobs overseas and has proposed tax changes that it argues will stimulate manufacturing, such as tax credits for manufacturers of products that can be used to produce green energy. The Romney campaign has promised to crack down on China for artificially lowering the value of its currency, which makes Chinese goods cheaper and makes it harder for American manufacturers to compete. Romney has also proposed exempting companies’ overseas profits from taxes. As president, Obama has reneged on his pledge to renegotiate the North American Free Trade Agreement (NAFTA), which makes it cheaper and easier for companies to manufacture goods in Mexico and Canada and import them to the United States, and signed new free trade agreements with Columbia and South Korea that have similar effects.

“I don’t think Obama is going to do much to stop outsourcing—this is like renegotiating NAFTA,” Baker says. “Great for campaign purposes, but no one around him ever took it seriously.”

“The president is very clear that the last thing we’d want to do is incentivize more [outsourcing],” Bernstein says, “I haven’t seen that sentiment reflected in the proposals from the Romney camp.”

The one Romney proposal both Baker and Bernstein agree might lead to less offshoring is his pledge to go after China for allegedly manipulating its currency. But Baker is skeptical Romney will follow through.

“If Romney did actually take steps to reduce the value of the dollar [thus making US exports cheaper and more attractive to overseas customers], it would have a big impact on offshoring, but I don’t believe that he would,” Baker says. “Obviously Obama won’t.”

Bain and outsourcing are likely to remain sources of conflict between the candidates as the campaign goes on. It’s ironic, then, that when it comes to the basic economics of outsourcing, the candidates basically agree—as do most economists. Many voters, however, see things differently—which is probably why neither of the candidates is talking about what they have in common.