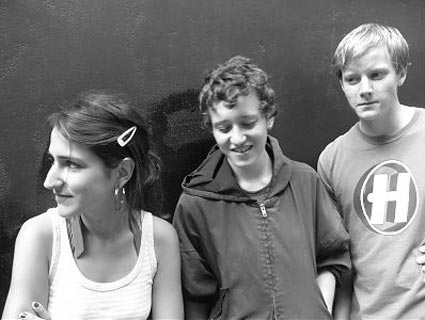 The album Never begins with a clamor. Discordant, metallic beats clang on a loop before Mica Levi’s ghoulish vocals sweep in. “Just leave the rest for me/Just leave the rest for me,” she pleads. A wind-down, and then a bluesy refrain: “I’m easy to please/I’m easy to plea…” But before I can anticipate a proper verse-chorus, someone’s flipped the switch. Bashing ensues, as does synthetic screeching. White noise streams on high while something rolls, crunching over broken glass. There’s the suck of a vacuum cleaner, a manic crescendo, a halt.

In 1913, 27-year-old Italian futurist Luigi Russolo expressed his boredom with the state of music.* In a world made newly complex by industry and the roar of machines, accepted “musical sound,” Russolo wrote in a letter to his friend Francesco Balillo Pratella, “has become to our ears what a too familiar face is to our eyes.”

“Noise, on the other hand,” he argued, “comes to us confused and irregular as life itself.”

British trio Micachu and the Shapes’ second album, Never, fully embraces noise for all of its shock and harshness. Much of it has to do with frontwoman Mica Levi’s affinity for vacuum cleaners and homemade instruments, like her chu (a guitar she adapted to be hit with a stick), or the xylophone she constructed out of lightbulbs. A classically trained musician (as well as the youngest person to become an artist-in-residence at London’s prestigious Southbank Centre), Levi spent her early years making grimy beats and mixtapes with local London rappers, another influence that’s clearly stamped itself on the latest Shapes release. While the group’s first album, Jewellery, also toyed with abrasiveness, Never breaks away from the cuteness and quirk of those songs. “What matters is whether you’re genuinely excited by it,” Levi told the Guardian about the Shapes’ use of unconventional sound earlier this month. “The braver you are, the more careless you are with it, the better it is.”

On Never, the result is a set of songs that stomp, spook, and swagger with mechanical force. And yet, the Shapes honor the pop within—much of Levi’s melodies sound like they could have been ripped from an unmade Kinks album, or from what John Lennon might’ve hummed to himself while brainstorming Revolver. “Are you sure you’re okay? Couldn’t be better,” Levi sings on “OK,” a jangly, psychedelic jaunt over sludgy synth and what sounds like clashing swords. “Holiday” too, is at its heart pure doo-wop, though doo-wop pulled apart, put back together, and reanimated with squealing tape that resembles a sitar. On the album’s most straightforward track, “Top Floor,” Levi sings a short, dreamy melody about wanting “to jump into the white sky,” while accompanied by chirping birds.

Even so, Never lands like a flying saucer onto pop terrain. It’s both jarring and magical, and indeed, one sentiment seems to inform the other. Hopefully, the Shapes only continue to push boundaries in this direction. Fellow noise artists Animal Collective will be touring with the trio across the US this fall, where American audiences will get to experience the latest roar from the Shapes’ visionary musical machine.

Correction: This article originally stated that Luigi Russolo was 19 years-old in 1913. In fact, he was 27. The text has been corrected.