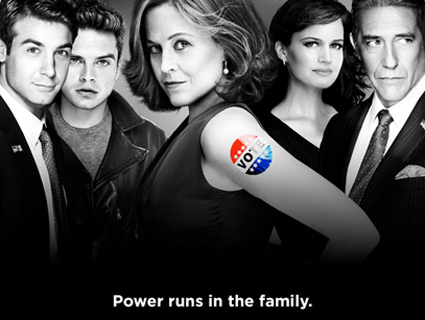 Today, I declare the era of collectively hating on The Newsroom officially over.

Why, you might ask? Well, after watching the mind-blowingly clumsy miniseries Political Animals, Aaron Sorkin’s mercilessly maligned HBO show suddenly feels like a bastion of realism and soul-stirring TV drama. (This is not unlike sticking your face in a bonfire, and then immediately sticking your face into something boiling hot that is not a bonfire—the relief is undeniably sweet.)

Political Animals (premiering Sunday at 10 p.m. EST on USA Network) follows the family drama surrounding Elaine Barrish (played by Sigourney Weaver), a fictional former First Lady of the United States. After losing the Democratic primary to the young hope-and-change candidate Paul Garcetti, she takes accepts the job of Secretary of State in her former opponent’s administration. (Her defeat is attributed largely to her cold demeanor, accusations of being a “closet conservative,” and unlikability.) Her ex-husband is former POTUS Donald “Bud” Hammond (Ciarán Hinds), an adulterous, womanzing, yet popular Democrat with bona fide Southern roots. Two years into her gig at State, Elaine enjoys a 180-degree image makeover and a serious spike in popularity, renewing chatter of another White House run.

The inaugural two episodes of Political Animals takes place against a backdrop of a tanking American economy, a do-nothing Congress, public disillusionment, and a standoff with the Iranian government.

With a name like “Political Animals,” you’re probably expecting something with edge and ferocity. No such luck—this offering is defanged and tame, hobbling along like an expletive-encrusted, sexed-up version of a political Hallmark film.

In spite of its star power and potential (the trailer makes it seem way more sophisticated and rock ‘n’ roll than it is), the six-part miniseries stalls at the intersection of corny dialogue, phone-it-in acting, a dull storyline, and limp direction courtesy of writer/director Greg Berlanti, the Dawson’s Creek veteran who more recently helmed the 2010 Katherine Heigl rom-com Life as We Know It.

Matters aren’t helped by the fact that the cast of characters and actors predominantly comprises bad amalgams and bad knock-offs:

It’s as if the show is screaming so loudly to be recognized as bracingly relevant that it forgets to wring more than an ounch of excitement out of its intriguing premise. Political Animals sets up the Hammonds as a dysfunctional, power-mad dynasty, yet fails to produce a whiff of Shakespearean oomph, or even some serviceable soap-operatics. Instead, the miniseries takes a rapid nosedive into shallow, unconvincing tension.

The depiction of the administration’s inner workings is painfully juvenile in a way that reflects the same understanding of government you’d garner from watching half an episode of Commander in Chief while half asleep. After three American journalists are imprisoned and sentenced to death in Tehran, Secretary Barrish and the cabinet conduct a meeting so bush-league you’d think they were discussing the Case of the Missing Presidential Pogs. The stakes don’t feel much higher when the focus shifts to personal hardships. Attempted suicide, a cokehead eldest son, secret bulimia, Bud’s new buxom TV-star girlfriend: Every plot development in the House of Hammond is ruined by lurches and clichés.

But the biggest disappointment has to be that this supposed TV “event” amounts to a complete waste of breath for Sigourney Weaver, a consummate American actress who shows equal skill and smarts whether seducing Ed Helms or fist-fighting villainous space monsters. Here, it’s fairly obvious that she hasn’t a thing left to prove, which makes her slack portrayal of Elaine all the more disheartening. Sure, we get to see her smack down a handsy Russian minister by threatening to cut off his “tiny, shriveled balls” and feed them to him; but such moments are outweighed by the inescapable sense that Weaver isn’t even trying. (And it’s not like the usually terrific Burstyn, Hinds, Gugino, or Baker fare much better.)

In the end, Political Animals is a show that simply cannot find its voice, or pinpoint what makes it special. And at a limited six-episode run, there’s not a whole lot of time to figure it out. You’re better off watching Veep.