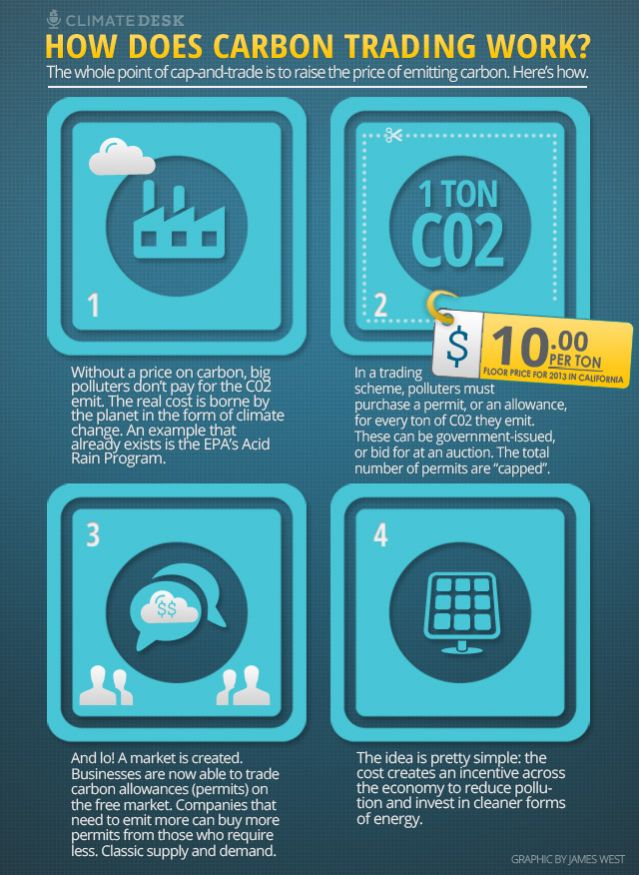 James WestEvery year at the Pacific Coast Producers processing plant in Woodland, California, half a million tons of tomatoes are sliced, diced, canned, boiled, and shipped to grocery stores nationwide. The operation is driven by steam, lots of it, which comes from a suite of massive natural-gas-powered boilers. Together, these boilers emit over 25,000 metric tons (about 27,557 US tons) of greenhouse gases annually, which means PCP will be forced to join California’s cap-and-trade carbon market, set to kick off in November.

The plan, which officials hope will put the country’s most populous state on track to cut greenhouse gas emissions 80 percent by 2050, isn’t the first carbon trading scheme in the United States: The Regional Greenhouse Gas Initiative, a collective of several Northeastern states (including Massachusetts, which rejoined a few years after being forced out by then-Gov. Mitt Romney), has been auctioning carbon credits, called allowances, since 2008. But unlike RGGI, which applies only to power plants, California’s plan extends to all sectors of the economy, which means businesses from paper mills, oil refineries, and universities to pharmaceutical manufacturers, steel mills, and food processors like PCP will have a stake in California’s campaign against climate change.

Yesterday, some 150 of those businesses got their first taste, as the curtain lifted on a dress rehearsal of the auction where companies will bid for the allowances (each worth one metric ton of carbon) that determine how much they’re allowed to emit, a dry run staged to let companies get comfortable with the system and work out any kinks before it launches for real in a few months. Over the next year, about 150 allowances will be bid on, together worth anywhere from $550 million to $1 billion depending on market forces. Some will be given away for free, to help businesses adjust to the added expense.

“It’s like some brave new adventure,” said Mona Schulman, a PCP vice president, as she waited for the fall of the digital gavel (the auction is held online) to start bidding. “Everybody’s in favor of clean air and the environment being healthy, but there’s a lot of uncertainty down the road.”

Barring an unforeseen advancement in steam boiler technology, Schulman said, the plant will have limited options for reducing emissions; as the cap gets lower every year, they’ll be left with the tough choice of having to cut production, or shell out to other companies for their unused allowances.

“That’ll be an unknown cost we’ll have to bear, that some of our competitors [in other states] won’t,” she said.

Kristen Eberhard, a lawyer with the Natural Resources Defense Council in California, said some of the revenue the state will collect from the auction will go back to businesses like PCP to help them adopt cleaner technology.

“There are lots of opportunities to operate more efficiently and this program will push businesses in that direction,” she said.

When it opens, California’s carbon market will be the second-largest in the world. The largest, the European Union’s Emissions Trading System, became even bigger Tuesday when Australia announced a deal to link its fledgling carbon market to the EU’s. That move, said Harvard environmental economist Robert Stavins, could be a catalyst for increased international cooperation in battling climate change.

“Given the relatively primitive state of climate change policy around the world, especially considering the scope of the problem, this is a very significant step forward,” says Stavins, who, like many environmental policy experts, has long pointed to pricing carbon as the most effective global solution to climate change. A globally linked carbon market is still some years off, he added, but each successful new partnership builds confidence for governments—like the United States—that have been slow to join the fray.

In that respect, California is ahead of the curve: Officials there and up north in Quebec are hammering out details of a plan to link their markets as soon as early 2013.

Still, cap and trade has its detractors, who in 2010 came out in force to squash a bill in Congress establishing a national carbon market. Like Schulman, they worry that the system will impose harsh costs on businesses, translating to higher prices for consumers.

After the closing bell rang, a spokesman for the state agency that manages the auctions said the central idea is to make large polluters accept the carbon price as a cost of doing business. The bidding had gone off without a hitch, leaving him feeling optimistic about the months and years ahead. The hope, he said, is that as the cap falls, businesses will find it more cost-effective to cut emissions by their own means, rather than chasing allowances. But that still leaves Schulman wondering about the future of tomato paste.

“We feel like we put out a pretty healthy product: It’s minimally processed, just preserved,” Schulman said. “The goals of this system we’re all in favor of. But we just don’t know whether cap-and-trade is the right way to do it or not.”

CORRECTION: An earlier version of our graphic misrepresented the auction’s starting price. The floor price for California’s November auction is actually $10 per ton.