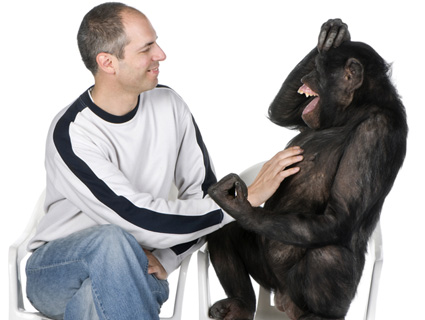 When a wild animal is rescued from poachers or wildlife smugglers, conservationists usually make an effort to rehabilitate it and return it to life in its native habitat. But what if the animal contracted a disease from humans during captivity that could then be transmitted back to the rest of its species? Should that animal still be released?

A team of scientists working in Africa recently encountered just that conundrum. They were looking for evidence of pathogen transmission from humans to apes at two chimpanzee sanctuaries in Uganda and Zambia, but were surprised by what they found: 58 percent of the chimpanzees (Pan troglodytes) tested were found to be carrying drug-resistant strains of the staph bacteria Staphylococcus aureus. Ten of the human veterinarians working at the sanctuaries also carried the bacteria. The level of infection “mirrors some of the worst-case scenarios in US hospitals and nursing homes,” team member Thomas Gillespie, a primate disease ecologist and associate professor at Emory University, said in a prepared release.

According to the US Centers for Disease Control, staph can cause potentially fatal infections of the skin or blood. Drug-resistant staph causes more than 18,000 human deaths in the US every year. The strains of staph bacteria at the sanctuaries were found to be resistant at various levels to penicillin, oxacillin, trimethoprim/sulfamethoxazole, erythromycin, tetracycline and clindamycin. None of the humans or chimps at the sanctuaries showed any signs of illness from the bacteria.

In a paper published August 21 in the American Journal of Primatology (AJP), Gillespie and his colleagues concluded that “reintroduction of sanctuary apes poses a risk to naive [nonimmune] wild populations through the introduction of human-adapted pathogens.” Humans and apes share a close genetic relationship, so apes in the wild have contracted everything from respiratory illnesses to the Ebola virus from humans. In the case of chimpanzees, the very social nature of sanctuaries—where orphaned infants and juveniles receive bodily warmth, socialization and play from humans, in lieu of their missing mothers—has been found by Gillespie’s team to increase the likelihood of pathogen transmission.

Previous studies have shown little evidence of antibiotic resistance in wild apes. A study published in Environmental Microbiology Reports in 2011 found some human-derived staph strains in chimpanzees, but little evidence of the drug-resistant variety.

In addition to the new study, the AJP published a commentary about the paper a few days prior to its release. “Confirming the transfer of S. aureus from human to chimpanzee in a sanctuary situation is a worrying fact,” the authors wrote, “and one that must inform disease surveillance and biosecurity protocols not only in sanctuaries but in all projects that have close contact between humans and apes.” But the commentary authors—led by Steve Unwin, veterinary officer of the Animal Health Center at Chester Zoo in England—also wrote that the health effects of S. aureus on chimpanzees are not yet known, so the study’s warning to reconsider reintroductions “may be premature.”

The original paper calls for increased protocols to prevent infected apes from being re-released into the wild; the commentary calls for prescreening human caregivers for pathogenic bacteria.

In related news, a study published August 23 in Ecology Letters looks at how diseases are shared among primates—apparently, even lemurs can contract some viruses from humans—and warns that greater understanding of the factors that enable cross-species transmission will help to predict future outbreaks of infectious diseases originating in the animal kingdom.