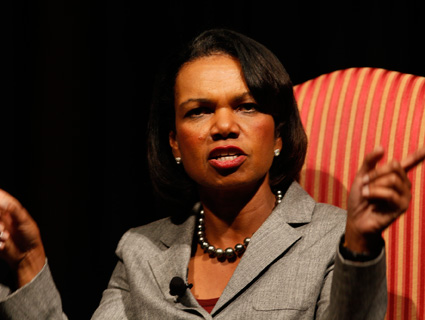 On Wednesday night, Republicans are hoping to burnish Mitt Romney’s and Paul Ryan’s national security credentials by trotting out one of George W. Bush’s top lieutenants, Iraq war hawk Condoleezza Rice, who was Bush’s national security advisor and then his secretary of state. She’s got her work cut out for her. Neither Romney nor Ryan has ever worked in foreign policy, or served in uniform—a veritable rarity among Republican executive nominees.

In a preemptive strike Wednesday, three top Obama campaign supporters and foreign-policy pros blasted the GOP ticket for being weak on defense. Though they’re probably not the Biden, Roemer, and Wilson you expected to hear from, the three Democrats—speaking to reporters on a conference call hosted by the progressive Truman Project—pulled no punches in criticizing the GOP ticket as neoconservative, incoherent, and anti-veteran. “On defense and national security, what we are hearing out of Romney and Ryan is an example of the hollow force,” said retired Assistant Defense Secretary Douglas B. Wilson. “All sound bites and theory with no grounding in reality and nothing substantive to back it up.”

“The Republicans have a very long history of experienced candidates” on military and veterans’ issues, said Tim Roemer, a former Indiana congressman and ambassador to India from 2009 to 2011, but “Governor Romney does not have that experience.”

Beau Biden, who served in Iraq in 2009 and is Delaware’s attorney general and the vice president’s son, said the Romney-Ryan ticket wants it both ways on defense spending: Supporting costly wars and expensive weaponry provided by contractors, while undermining benefits for those who serve in uniform, even as vets are getting hard with disabilities and unemployment. Citing a Veteran’s Day 2011 campaign appearance by Romney in South Carolina, Biden said, “He chose that day to propose his voucherization of the [Department of Veterans Affairs], which is a not-so-elegant euphemism for privatization of the VA.” (Here’s a video of Romney’s privatization speech.)

Governor Roemer cast the Republicans’ security policy as trading on tax cuts for the rich. “Romney has threatened to turn health care for veterans into coupons for veterans,” he said. “You cannot put a pricetag on a veteran who has served overseas.” Wilson hit Ryan’s unpopular budget proposals: “Ryan’s plan cuts everything from defense that isn’t a gun,” he said. “I think you have some quesions from returning vets and their families on just what that means for them.”

The Democrats also flagged misguided hawkishness in Romney’s foreign policy. “He’s said Russia is the United States’ number one political foe,” Roemer said, adding that the Republican nominee had a Cold War mindset and “an alarming lack of understanding of the threats of the 21st century, like cyber security, proliferation of nuclear weapons, and cells of Al Qaeda and the Haqqani network that want to kill Americans.”

Blame the usual suspects: Romney is relying on neoconservative hawks from previous Republican administrations. “It’s back to the future,” as Wilson put it. “Americans want America to be strong. They want America to lead. But they differentiate that from beating their chests and charging headlong off a cliff.”

Will Rice be taken seriously when she steps up to the podium and claims that Romney could lead America’s military better than Barack Obama can? As Roemer pointed out, Rice has repeatedly met with Obama on defense issues, and she has publicly defended or extolled his decisions as commander in chief, on Libya and in general.

“Nothing in this president’s methods suggests this president is other than a defender of America’s interests,” Rice said of Obama in 2010.

Last month she told an audience at Harvard that Obama’s election—”that final hurdle”—was an inspiring example to the rest of the world of US national values. Of the president’s tribulations, she added, “Americans are very tough on their presidents. The day that they’re inaugurated, they’re the smartest, most amazing person on the face of the earth. And a year and a half later, it’s: ‘How did we ever elect him?’ I think President Obama is experiencing some of that right now.”

And just this morning on CBS, when asked to name a specific Obama failure on foreign policy, Rice equivocated. “It’s not a time to look back,” she said, “it’s a time to look forward.”