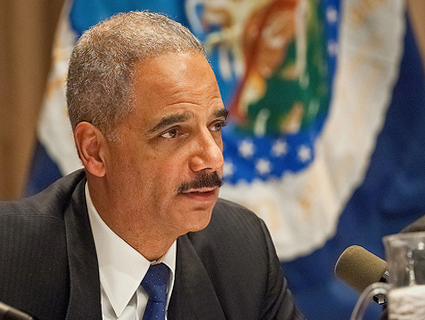 [UPDATE: For more on this issue, check out Kevin Drum’s latest: “It’s Official: No One Will Ever Be Prosecuted for Bush-Era Torture.”]

Afghan detainee Gul Rahman would never leave the CIA prison known as “The Salt Pit” alive. Interrogators left Rahman in his cell, reportedly “naked from the waste down,” after shackling him and dousing him with cold water. In the morning, they discovered that the Rahman, who had reportedly been “uncooperative” with his captors, had died of hypothermia.

Military medical examiners said Iraqi detainee Manadel al-Jamadi died of asphyxiation, a result of his being hung by his arms, and other mysterious injuries sustained during interrogation, such as his five broken ribs. After his death, US Army Reservist Charles Graner Jr. was photographed grinning next to al-Jamadi’s frozen corpse. The Associated Press notes that the CIA official who oversaw Rahman’s treatment “was reprimanded” and “now works as a defense contractor.”

The Justice Department announced Thursday that the investigation into Rahman and al-Jamadi’s deaths would be closed with no charges. This means that the Obama administration will be turning the page on the Bush years with almost no accountability for anyone linked to the legalization and implementation of Bush-era interrogation techniques.

In June of last year, a two-year investigation led by special prosecutor John Durham decided that out of 101 CIA interrogations during a period when the US government had officially sanctioned torture in the form of “enhanced interrogation techniques,” only these two were worthy of exploring further. Durham’s mandate had only been to look at those interrogations that had gone beyond the officially sanctioned guidelines, with Attorney General Eric Holder affirming that those interrogators who had acted in “good faith” based on guidance from the Bush Justice Department were not to be prosecuted.

Investigations of the architects of the Bush-era program had been all but ruled out in 2009, when President Barack Obama told ABC News that “we need to look forward as opposed to looking backwards,” a remark which undermined the institutional independence of the Justice Department. Many at Justice were on the same page: An internal investigation into the professional conduct of the Bush-era attorneys who gave their legal blessings to torture, John Yoo and Jay Bybee, was neutered by a high-ranking Justice official. Bybee is now a federal judge. Yoo went back to being a professor at UC-Berkeley; National Review occasionally invites him to troll liberals by arguing that they fail to respect limits on executive power.

Durham had originally been assigned to investigate the destruction of CIA tapes that showed the torture of two detainees in American custody. The tapes had been destroyed by former CIA official Jose Rodriguez, who has described torture as America putting on its “big boy pants” but worried that the public reaction to the material contained on the tapes would be “devastating.” Rodriguez hasn’t faced any charges for his deliberate destruction of evidence, though he has written a book about his experiences and gone on a publicity tour making dubious arguments about the effectiveness of torture.

When the Democratic National Convention begins next week, the party will undoubtedly tout the administration’s successes in fighting al Qaeda, particularly the killing of Al Qaeda founder Osama bin Laden. Four years ago Obama, then a senator from Illinois seeking the mantle of commander-in-chief, promised to “take out” bin Laden, even at the expense of the US relationship with its nominal ally, Pakistan. He did that. But he also promised to “restore our moral standing” in the world. Since taking office, the president has hewed closely to his philosophy of “looking forward,” at least when it comes to officially sanctioned wrongdoing by agents of the state. From here on, American national security officials have little reason to worry about criminal penalties for breaking the law, even if doing so results in the death of another human being.

Still, not everyone connected to Bush-era torture has escaped accountability. John Kiriakou, the former CIA official who went public about interrogation techniques like waterboarding, is being prosecuted for disclosing classified information for allegedly assisting defense attorneys who were seeking to identify interrogators who may have tortured their clients.

You can torture a detainee in your custody to death and get away with it. You just can’t talk about it.