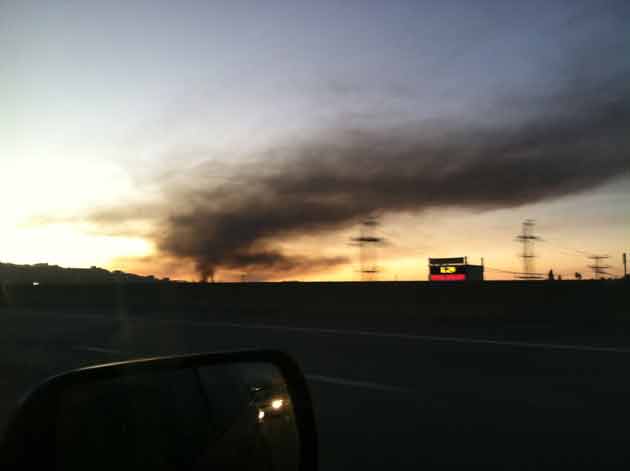 The plume of smoke at the Chevron refinery, seen from the 80 East

When I heard about the fire at the Chevron refinery last night, I decided to hop in my car and check it out. At about 8:30, I headed out on the 80 freeway, east from Berkeley. Before I even saw the plume, I could smell it: an acrid odor similar to burning plastic. When I got to the plant, the security guards at the gate told me that no one was allowed inside, so I joined a half dozen news trucks across the street. Sirens began to sound, and another reporter told me he thought they were supposed to alert nearby residents to take cover.

He was right: Chevron issued a shelter-in-place alert—meaning that residents should stay inside, close the doors and windows, and block cracks with damp rags or tape—for the surrounding area soon after the fire began at 6:15 and didn’t lift it until close to 11 PM, after the fire was out.

After about a half an hour of waiting around, Chevron spokeswoman Heather Kulp came out to talk to the assembled group of reporters outside. She told us that a diesel leak had caused a fire at the No. 4 crude unit, and that one worker was being treated for a minor burn on his wrist. She couldn’t answer any questions about the air quality, or what exactly the health hazards of breathing in the fumes might be. But I later learned from local news reports that about 200 people flooded local hospitals complaining of difficulty breathing and eye irritation. The Chevron crew took air samples throughout the evening and said it didn’t find any dangerous compounds.

Yet when I left the refinery at around 10:30, it still smelled awful, and my eyes were getting itchy. I could smell the fire for most of my drive back home to Oakland. Today the fire is out, but there’s no official report on how much diesel burned. The refinery is one of the biggest in the US; it can process about 240,000 barrels of crude a day. There’s speculation that the fire will cause a spike in California gas prices, though it’s not clear yet how much.