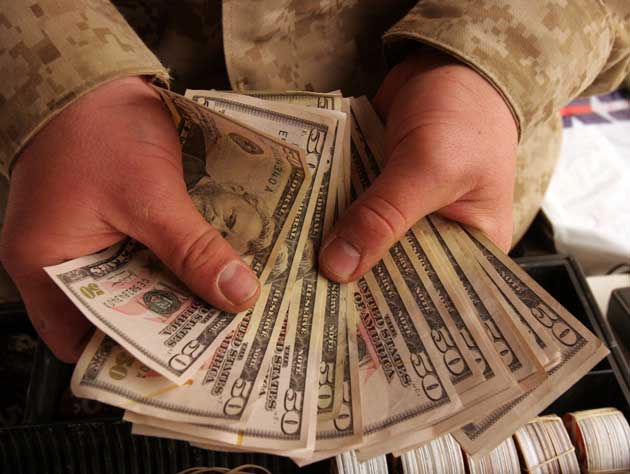 Anxiety is rising in Washington about the big cuts to military spending slated to go into effect in January unless Congress takes action.

Republicans, defense industry executives, and some Democrats are arguing hard against the automatic cuts, which were the result of last summer’s deal to raise the debt ceiling and would also cut nondefense spending equally. Multiple members of Congress have warned that slashing defense spending by $600 billion would devastate the military, with Sen. Lindsey Graham this month predicting the cuts would deal “a death blow to our ability to defend ourselves.”

There’s just one problem: The number they cite is wrong.

The law triggering the cuts does not slash the military budget by $600 billion. That figure — which has also been widely cited in the media — overstates the amount of military cuts by more than $100 billion.

Signed by President Obama last August after the debt ceiling drama, the law actually requires $492 billion in military budget cuts. (The cuts are slated to take place over nine years.)

“It is downright misleading to say that sequestration will cut defense by $600 billion,” said David Berteau, senior vice president at the Center for Strategic and International Studies and a former Defense Department official. (Sequestration is the term often used in Washington to refer to the cuts.)

“This entire exercise against sequestration is tainted by the intense desire of several parties — from the members of Congress who voted for the bill to the Pentagon that wants to avoid the cuts — to make sequestration seem untenable,” Berteau added.

Both a Congressional Budget Office report and the head of the Office of Management and Budget concur that the proper figure for the cuts is $492 billion, or about $55 billion annually over nine years.

Asked about the figure, spokespeople for the politicians offered a range of responses, none offering backing for the higher number.

A spokesperson for Rep. Olson, Melissa Kelly, said that the congressman “just misspoke” and that he was not trying to inflate the figure. “It was an honest mistake,” she said.

The Romney campaign declined to comment. Sen. Graham didn’t respond. A spokesperson for Rep. Gingrey said the figure includes other cuts but declined to offer details.

As for Gov. McDonnell, a close ally of Romney, a spokesperson said “the governor is using widely quoted numbers” from the media and legislators.

Indeed, the inflated figure has been cited as fact in the New York Times, Washington Post, National Journal, Politico, Roll Call, and on MSNBC, CNN and Fox News, among others.

Sometimes outlets have also offered conflicting numbers. For example, a June 3 article in the Times reported that if Congress fails to act to prevent the triggered cuts, a “$600 billion, across-the-board spending cut is to hit the Pentagon.” On June 22, another Times article got it right, referring to “the roughly $492 billion in planned Pentagon cuts” that will start next year, barring congressional action.

To understand the law requiring the cuts and how much money it really cuts from the military budget, let’s turn to the text of the bill, called the Budget Control Act of 2011. Here is the section that governs the cuts — half from defense and half from non-defense — that will start in 2013 barring action by Congress. (OMB stands for Office of Management and Budget.)

The law requires deficit reduction of $984 billion – half from defense and half from nondefense.

Here’s the formula in the bill that gets to that number. It starts with a baseline of $1.2 trillion. That’s the minimum amount in deficit reduction that last year’s so-called congressional supercommittee had to achieve to avoid the triggered cuts. (They did not achieve any deficit reduction.) This is the figure that the incorrect references seem to be based on. But the formula doesn’t end there.

The formula then reduces the $1.2 trillion by 18 percent to account for projected savings because of interest payments the government would avoid. $1.2 trillion minus 18 percent is $984 billion. Half of $984 billion — the military portion of the cuts — is $492 billion.

As it turns out, the inflated $600 billion figure may not be correct even as the amount that the government would save. That’s because those projected savings on interest payments from the defense cut could be a bit smaller than originally estimated.

The Congressional Budget Office released a report in January, several months after the Budget Control Act passed, projecting that the savings from debt service would be just $142 billion. Add that to the $984 billion in required cuts, and the law would save the government $1.13 trillion, not the much-touted $1.2 trillion figure. Since half of the cuts come from the military, the total savings attributed to defense cuts would be about $560 billion. None of this would affect the amount of required military budget cuts.

There’s one other wrinkle here. (Sorry.) House Armed Services Committee Chairman Buck McKeon, R-Calif., a fierce opponent of the impending cuts, has referred to “$500 billion to $600 billion” in cuts. When we asked committee spokesman Claude Chafin where McKeon’s figures came from, Chafin offered an argument separate from the debt service issue.

“[T]o achieve that [$492 billon in] savings, cuts will need to be much deeper to accommodate a variety of additional costs,” Chafin said in an email. “These include, but certainly are not limited to the costs of contract renegotiation, contract cancellation penalties, terminating civilian positions and involuntarily separating members of the military.”

In other words, this argument goes, by cutting the military budget the government will incur extra costs that will require still further cuts to achieve the required $492 billion in deficit reduction. Another House Armed Services Committee aide said that there are no specific calculations that led to McKeon’s claim of “$500 billion to $600 billion” in cuts because it’s not yet clear which programs will be cut.

Several military budget experts interviewed by ProPublica were skeptical that any “additional costs” — such as a contract termination fee– could push the total figure up to $600 billion.

Russell Rumbaugh, director of the Budgeting for Foreign Affairs and Defense program at the Stimson Center and a former defense analyst on the Senate Budget Committee, says that cuts will likely be structured to avoid penalties or other costs.

McKeon’s own committee also cites the correct $492 billion figure in a fact sheet on its own website.