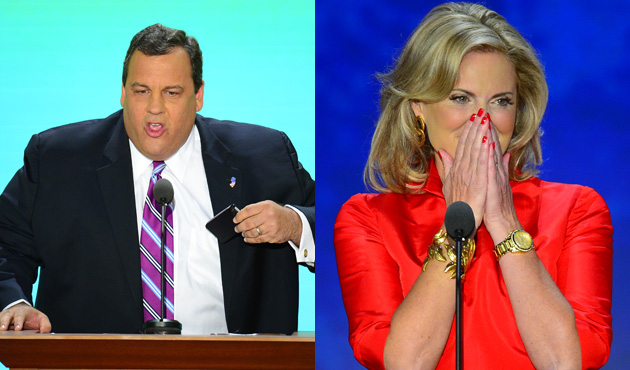 Is the 2012 election about love, or is it about respect? At the first night of Mittfest in Tampa, there was some confusion on this point. After hours of predictable Obama-hates-freedom-and-business speeches, the evening culminated in back-to-back addresses by Ann Romney, Mitt Romney’s emissary to the human race, and Chris Christie, the take-no-guff Jersey guv.

The candidate’s wife opened this way: “I want to talk to you tonight not about politics and not about party…Tonight I want to talk to you about love.” Naturally, it was the love she had for a guy she met at a dance many years ago and the love all Americans have for their homeland. But she quickly digressed to tell the delegates—and the national television audience—that Ann Romney knows darn-tootin’ well that many Americans have it tough these days, especially women. And she played the gal card: “If you listen carefully, you’ll hear the women sighing a little bit more than the men. It’s how it is, isn’t it? It’s the moms who always have to work a little harder, to make everything right. It’s the moms of this nation—single, married, widowed—who really hold this country together…You know it’s true, don’t you? You’re the ones who always have to do a little more.”

Here was the play for the female vote—a response to the Democratic charge of a Republican war on women. But was she engaging in Gender Warfare? Dividing the nation into moms and dads in order to score political points?

If not, this was the political equivalent of sending flowers to the little lady in hope of winning her over. And it was condescending. Speaking to the moms of the country, she said, “There would not be an America without you.” As if such a platitude would have real value to them. And referring to all women, she added, “We’re too smart to know there aren’t easy answers. But we’re not dumb enough to accept that there aren’t better answers.” Wait a minute: Who says women are dumb? What was she suggesting?

She referred not once to a single policy her hubby would implement that might make life better for the women whom she was claiming as sisters. Instead, she went on about how wonderful Mitt is as a husband, parent, and friend. (Newsflash: Ann Romney Endorses Husband!). She did the bio, covering their salad days—they “ate a lot of pasta and tuna fish”—and her breast cancer and MS, as if she could truly identify with those working moms the Romney campaign has had such a difficult time attracting.

This was her big finish:

I said tonight I wanted to talk to you about love. Look into your hearts. This is our country. This is our future. These are our children and grandchildren. You can trust Mitt. He loves America. He will take us to a better place, just as he took me home safely from that dance.

Ann Romney was comparing the entire nation to a high school girl being escorted home from a dance. That was her pitch: I love him, you should, too. Don’t worry your pretty little heads about the details.

Christie was not so dewy-eyed. He talked a lot more about himself than Mitt Romney, opening with a long description of his own family background. “[T]he greatest lesson Mom ever taught me, though,” he said, “was this one: She told me there would be times in your life when you have to choose between being loved and being respected. Now she said to always pick being respected. She told me that love without respect was always fleeting—but that respect could grow into real and lasting love.” He declared now was a time for tough leadership: “Tonight, we are going to choose respect over love.”

Christie proceeded to deliver an unintentionally mixed message. “We are demanding that our leaders stop tearing each other down, and work together to take action on the big things facing America,” he said. But what about those Romney ads that tear down President Barack Obama?

Christie then continued talking about…himself, detailing all his battles in New Jersey, taking on the Democrats and unions, and calling for a war on entitlements. He was more than two-thirds into his speech before he connected all this jaw flapping about respect and toughness to the guy who was supposedly the main subject of the night, pronouncing Romney a fellow who “will tell us the truth and who will lead with conviction.” But Christie, like Ann, kept his distance from the details. He didn’t identify these hard truths or provide examples of Romney’s leadership. (Romney has hardly been a hard-truth candidate; he refuses to talk about the details of his own tax plan.) Moreover, it was as if the slim Romney portion of this speech was tacked on to the presidential campaign announcement speech Christie never gave.

Christie didn’t even go after Obama with great ferocity; his blasts at the president were generic. He accused Obama of following polls, and huffed, “I don’t want their only inheritance to be an enormous government that has over-taxed, overspent, and over-borrowed a great people into second-class citizenship”—as if that was Obama’s game plan. But there were no direct criticisms of specific Obama actions or stances. To go into all that might have caused Christie to trim down the thrilling account of his own epic battles in the Garden State.

If the theme of Christie’s speech was “respect,” what the governor had in mind appeared to be respect for his own political stylings. Romney was mostly an afterthought. In fact, Romney was the moon to the two suns of the night. Ann Romney told America’s women that all they need to know is that because she, a woman, loves Mitt, they can trust him. Christie’s main point was similarly self-centric: Because he’s a tough SOB who commands respect he can vouch for this other guy.

But was the overall message love or respect? As I left the convention hall, I spotted Ben Ginsberg, a top Romney adviser, and asked him that question. He replied, “You’ll find out in the morning.”