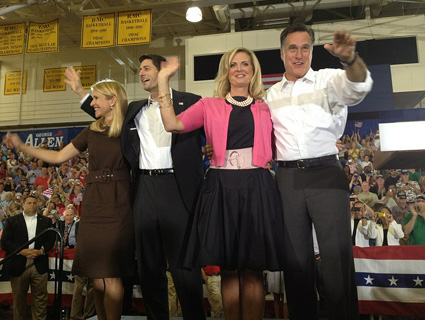 If you want to know what a Mitt Romney presidency and a Paul Ryan vice-presidency would mean for your local family planning clinic, look at what happened in Texas and Ryan’s home state of Wisconsin.

Women’s health clinics around the country rely on federal funding for family planning. Almost all of that money comes from two sources: Medicaid, the joint federal-state health care program for low-income people, pregnant women, and infants; and the decades old program known as Title X.

GOP governors like Texas’s Rick Perry and Wisconsin’s Scott Walker have targeted both of these income streams in their states, blocking many clinics from receiving crucial funds. But Romney and Ryan would gut both programs on the federal level, all but ensuring that clinics in blue states have to close, too.

“What has [been] done in Texas, Mitt Romney and Paul Ryan would do in all 50 states if elected,” says Dawn Laguens, a spokeswoman for Planned Parenthood Action Fund, the advocacy and political organization that works to protect Planned Parenthood health centers nationwide.*

Title X was established in 1970 to provide birth control and preventative health services to millions of men and women across the US, regardless of income or insurance status. In 2010, clinics funded by Title X performed over 6 million Sexually Transmitted Diseases (STD) tests, according to STD awareness organizations. Planned Parenthood alone provides care to about one-third of Title X patients. And some studies show that Title X family planning actually saves taxpayers money—according to Guttmacher Institute, which promotes reproductive rights worldwide, in the US “every $1.00 invested in helping women avoid pregnancies they did not want to have saved $3.74 in Medicaid expenditures.”

Despite those statistics, Title X has drawn fierce opposition from the two men at the top of the GOP ticket. Last year, Ryan supported a bill that would have amended Title X to prohibit grants from being awarded to groups like Planned Parenthood that provide abortions. (Such groups are already forbidden from spending federal money on the procedures.) Romney wrote in a USA Today op-ed that he would scrap the Title X program entirely to cut costs.

Medicaid, which provides an even bigger chunk of funding for family planning centers than Title X, would also take a serious hit under Romney and Ryan—at least if Ryan’s budget proposal is any indication. Ryan’s plan suggests slashing Medicaid by $810 billion over the next decade. States would then receive fixed federal grants and would get to pick and choose who and what they would cover.

Family planning advocates say that if Ryan and Romney go through with overhauling the program, legislators will have no qualms about getting rid of women’s health clinics. Several states have already shown their willingness to slash women’s health funds. Last year, in Ryan’s home state of Wisconsin, which has 27 Planned Parenthood clinics, Gov. Scott Walker (R-Wis.) signed a bill cutting about $1 million in family planning funding. The cut will affect nine health centers and 12,000 patients, according to Nicole Safar, public policy director for Planned Parenthood Advocates of Wisconsin.

“Ryan’s plan essentially scraps Medicaid and gives the states chunks of money instead,” Safar explains. “In a state like Wisconsin, we wouldn’t have any chance to fund women’s health.”

Texas is another example of what the future of women’s health could look like if Romney and Ryan are elected. Last year, Gov. Rick Perry (R-Texas) slashed state family planning funds by two-thirds. As a result of those cuts, over 60 clinics (12 of which are Planned Parenthoods) in the Lone Star State have shut their doors, and over one hundred thousand women who previously had access to breast and cervical cancer screenings, STD tests, and birth control have been left without care.

This year, Perry turned his attention to federal funds, rejecting Title X funding and signing a law that excludes abortion providers from receiving funding through the federal Medicaid Women’s Health Program. Planned Parenthood is suing Texas over that law.

If Perry manages to kick Planned Parenthood out of Texas entirely, the remaining community health centers in the state will have to increase their patient load from fewer than 4,000 to 56,000 people in order to offset the loss, according to a study by the George Washington University School of Public Health and Services.

For now, Rochelle Tafolla, a spokeswoman for Planned Parenthood Gulf Coast Action Fund, says the future of healthcare for 16,000 low-income women in Texas is “uncertain.”

The Romney campaign did not respond to a request for comment for this article.

Correction: An earlier version of this article misattributed a quote to Justine Sessions, a spokeswoman for Planned Parenthood. The sentence has been corrected.