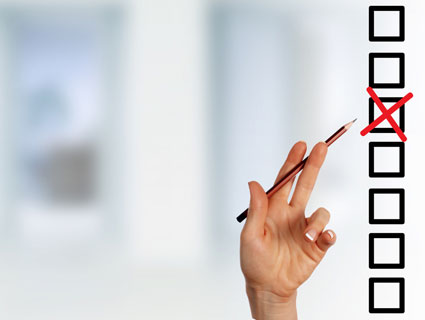 If you’re overseas and voting by mail in Connecticut this November, grab an aspirin and a pen with lots of ink. The state’s Supreme Court hadn’t resolved a partisan scuffle over who gets to be listed first on the ballot this year before overseas absentee ballots were dropped in the mail, so those voters will have to write in all the candidates’ names themselves, according to Deputy Secretary of State James Spallone.

The Connecticut Republican Party challenged (PDF) Secretary of State Denise Merrill’s decision to list Democratic candidates first on the ballot this year, arguing that it violated a statute mandating that the party whose candidate for governor got the most votes in the last election gets to be listed first in all ballots. (The esoteric law dates back more a century, Spallone says—before suffrage was extended to women and most African-Americans in the state.)

Since Democratic Gov. Dannel Malloy won in 2010, it would seem like his party should get prime billing, according to the provison. But Republican legislators like State Sen. Len Fasano argued that the law refers not to the total number of individual votes a candidate received, but to the number of party votes. Since Malloy wouldn’t have won without support from voters in the Working Families Party, the state GOP said, Malloy’s Republican challenger got the most party votes, and GOP candidates should get to be listed first this year. Me first, mom!

When Merrill refused to reverse the Dem-friendly ballot order, state Republicans filed an appeal with the high court. But the court waited til today to issue a ruling in favor of the GOP (based on the precedent of a more than 70-year old case). But the deadline to send out ballots to overseas and military voters came and went last Friday. So those voters get empty ballots and a list of candidates that they’ll have to write in on their own.

There are other states where ballots aren’t yet finalized, but they didn’t go all blank-ballot on themselves. In Arkansas, the State Supreme Court still hasn’t ruled on whether a medical marijuana initiative should be included, but according to the state’s Division of Elections, Arkansas has already printed the ballots with the initiative on it and just won’t count the votes if the court decides the other way.

Is the order of candidates such a big deal, anyway? Republicans say it can affect who wins—though, as Mason Kroll reports at the Yale Daily News:

It is unclear how much candidates would benefit from landing the top slot. Spallone said that recent history suggests that being listed first on the ballot does not have much of an effect, while Fasano said some estimates credit the slot with a 3 or 4 percent increase in vote share.

That seems to speak poorly for voters’ whims. By extension, does a blank ticket mean people won’t vote at all?