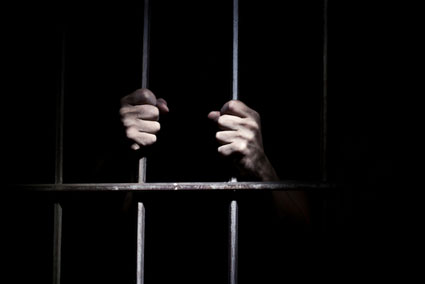 In an extraordinary trial that kicks off today in federal court in Montgomery, Alabama, the American Civil Liberties Union will take on what David Fathi, director of the group’s National Prison Project, calls “the last vestiges of state-sponsored discrimination against people living with HIV.”

While it is hardly unusual for prisoners to be denied rights that most people take for granted, Alabama inmates who test positive for HIV are effectively quarantined, barred from prison activities, and—hewing to a policy with chilling historical echoes—male inmates are forced to wear white armbands to signal their HIV status. We are treated “like we are contagious animals,” a female inmate wrote in a letter to the warden of Tutwiler prison. “We have no recreations. Basketballs are flat and playing cards are beyond recognition…It’s like punishment 3 times over. Prison, the virus, then the denial of an education, or trade. We are secluded from everyday life.”

In the early days of the AIDS pandemic, nearly half of the nation’s prison systems utilized some form of segregation for prisoners who were HIV-positive or showed symptoms of the disease. But most of them changed their policies years ago as new drugs were developed to halt the progression of the disease. “Every state except Alabama and South Carolina has abandoned segregation of HIV-positive prisoners,” Fathi says.

The closely watched class-action case has drawn the attention of celebrities ranging from Rachel Maddow—who has championed the cause of HIV-positive prisoners for more than a decade—to Elton John, whose AIDS foundation funds programs for inmates and ex-offenders with HIV. (Read our interview with Maddow here.)

The trial, expected to last a month, will be presided over by Judge Myron Thompson, a Carter appointee with a highly regarded civil rights record. The ACLU will argue, as it has for the last 25 years, that Alabama’s prison policies violate the Americans with Disabilities Act (ADA).

The group’s pretrial brief notes that the act “prohibits blanket disability-based exclusions,” and that Alabama’s segregation policy “is based not on sound medical needs or legitimate correctional concerns but on irrational fears and entrenched prejudices against people with HIV.” The ACLU also cites experts and federal studies noting that “mandatory testing and segregation are counterproductive and can have negative health consequences for segregated prisoners.”

“It’s shameful that in the year 2012 Alabama is still categorically banning prisoners with HIV from rehabilitative and vocational training programs,” Margaret Winter, the ACLU’s lead attorney, told us via email. Winter, who has worked on the case since the late 1980s, adds that the state is “not just figuratively but literally stigmatizing all male prisoners with HIV by requiring them to wear white armbands round the clock.”

The Alabama Department of Corrections, which declined to comment for this story, maintains that its treatment of prisoners with HIV is “separate but equal.” But the practical result of the policy, the ACLU contends, is to deny prisoners access to vital programming based on their health status. For example, it argues, HIV-positive inmates with serious psychiatric problems are housed in special cells blocked off from all of the others by a chain-link fence, and because they are sequestered in just 2 of the system’s 29 prisons—one for men, one for women—they lack access to more suitable health programs available at other prisons. The same is true for HIV-positive inmates with substance abuse problems.

Inmates in the HIV unit would spend their time “lounging around their cells or outside their cells,” recalls a parolee turned plaintiff. “There was nothing to do.”

HIV-positive prisoners are also effectively barred from various self-help, education, trade, and work-release programs, and even certain faith-based and old-age programs. Inmates in the HIV units, spend their time “lounging around their cells or outside their cells,” recalls Albert Knox, an HIV-positive parolee who also has Lou Gehrig’s disease; he is one of nine plaintiffs named in the ACLU suit. “There was nothing to do,” says Knox, who served more than two years in Alabama state prison for possessing just over one-tenth of a gram of cocaine.

The ACLU’s opposition dates back to 1987, when it first teamed up with Southern Center for Human Rights to challenge Alabama’s segregation policy in court. Two years later, Robert Edward Varner, a federal district judge appointed by Nixon, decided the case in favor of the state.

The 11th Circuit Court of Appeals eventually remanded the case back to Varner’s court for a rehearing, but Varner again sided with the state. At one point during the proceedings, he ordered a bailiff to remove Winter, the ACLU lawyer, from the courtroom after she tried several times to ask him for a clarification. At another point, prior to testimony describing AIDS symptoms, Varner turned to the plaintiffs and sarcastically suggested that they might want to leave the room rather than hear details of the horrible disease and death that awaited them.

The ACLU appealed again, and won a new trial. This time around, the appeals panel noted that Varner had ignored evidence, and it kicked him off the case “to preserve the appearance of justice.” But the Alabama DOC petitioned for the case to be heard en banc—by the full 11th Circuit. In 1999, the full court sided with Varner.

“Former prisoners with HIV still weep when they describe the humiliation of being ostracized, isolated, mocked and warehoused,” Rachel Maddow wrote in Salon.

The rights of prisoners with HIV was a big issue for Rachel Maddow long before she scored her popular political talk show on MSNBC. Back in 2000, Maddow helped Winter set up No Lost Causes, a coalition that operates in both Mississippi and Alabama. The group successfully persuaded Mississippi to drop its discriminatory HIV policy. But Alabama’s Democratic governor, who favored similar reforms, lost his seat. Under his Republican successor, the Department of Corrections was eventually persuaded to ease restrictions so that HIV-positive prisoners could theoretically enter certain prison programs. But in practice, since HIV-positive inmates were confined to just two state prisons, many of these programs were out of their reach.

“HIV-segregation policies stemmed from raging paranoia about HIV contagion, paranoia that was extreme in Mississippi and even worse in Alabama,” Maddow wrote in Salon in 2009. An excerpt:

During a federal trial in the mid-1990s, an Alabama warden testified that the segregation policy was an essential security measure since people with HIV were as dangerous as rattlesnakes. He thought they should all be permanently tagged…A warden at the women’s prison in Alabama testified that it was too dangerous to allow prisoners with HIV to attend chapel because they might leap from their seats and bite someone to deliberately infect them with the disease. Years later, former prisoners with HIV still weep when they describe the humiliation of being ostracized, isolated, mocked and warehoused in segregated dormitories behind razor wire in a prison-inside-the-prison, and in many cases serving far more time in prison simply because of their disease.

Dissatisfied with the glacial pace of reform, the ACLU revived its campaign in 2006, and filed the current class action suit last year, arguing that the facts had changed substantially since the federal court’s ruling a dozen years earlier. ACLU lawyers made the point that HIV is no longer a “fatal disease,” as the appeals court had said it was in 1999—and that attitudes about HIV status have changed in tandem with medical advances.

“When I hear Alabama prison officials attempt to justify why they discriminate against prisoners living with HIV,” Winter says, “I feel like I’ve fallen into a time warp.” Nowadays, she argues, the only things protecting the state’s discriminatory policy are “profound ignorance, fear, and bias.”