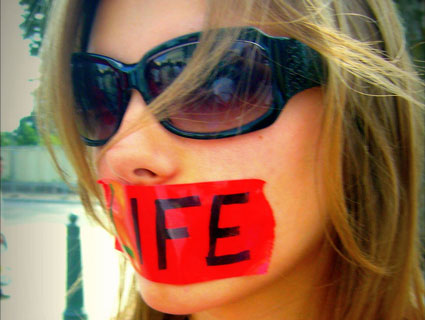 This story was produced by The American Independent.

Anti-abortion restrictions should be designed to raise “the costs” of abortions in order to discourage women from obtaining them, a prominent scholar for a leading anti-abortion group told an audience of social conservative activists in Washington last weekend.

Abortion rights advocates have long suspected that the purpose of restrictive abortion laws is to impede access to abortion. Anti-abortion advocates generally refuse to concede the point, countering that laws that require women to make multiple trips to the abortion clinic, for instance, are intended to help women make informed choices. But speaking at the Values Voter Summit, an annual gathering of religious conservatives sponsored by the Family Research Council and other conservative groups, anti-abortion scholar Michael J. New veered from abortion foes’ traditional argument when he specifically advocated policies to raise “the costs” of abortions.

“The best thing you can do when you get home is support a variety of state pro-life bills, and essentially, if your state has them, they can be strengthened,” New, a University of Michigan-Dearborn professor who is an adjunct scholar for the anti-abortion Charlotte Lozier Institute, said during a September 15 presentation at the summit. “You can defund abortion by stopping Medicaid funding or by defunding Planned Parenthood. You can strengthen parental-involvement laws, by requiring both parents to be involved. You can strengthen informed-consent laws: Require the woman to see an ultrasound, or require two trips to the clinic. That raises the costs; that stops the abortion from happening. You can lengthen the waiting period. Don’t be like the other states that do 24, 48, 72 hours. Do it for nine months—that’ll stop abortions in your state. I guarantee it.”

The Charlotte Lozier Institute was founded in 2011 as the education and research arm of the Susan B. Anthony List, a political action committee that works to elect abortion rights opponents to Congress. The Lozier Institute has been touted as the abortion rights opponents’ response to the Guttmacher Institute, a policy group once affiliated with Planned Parenthood that produces research on abortion laws and policy and is often cited by lawmakers, scholars, and journalists on both sides of the abortion debate.

New, who is also a fellow for the conservative Witherspoon Institute, said his research has found a correlation between states’ anti-abortion legislation and declines in abortion—among 47 states that reported data in 1990 and 2005, he said the number of abortions dropped by about 22 percent.

New reiterated his comments in an interview with The American Independent following the panel discussion, specifically noting that abortion laws that require two separate trips to the clinic drive up the costs for women trying to get an abortion, “especially for women in rural areas.”

“We really know a lot about public funding restrictions, and we know a lot about parental involvement,” New said. “There’s also a body of research—not as large—on informed-consent laws, and the important thing there is they really have to be designed the right way. They typically have to require two separate trips to the clinic. That kind of raises the economic costs of getting an abortion, especially for women in rural areas, women who live far away. Yeah, I think there’s good evidence from Mississippi and a few other states that have done them that they’ve been effective, as well.”

“I have some concern with how well a lot of those informed-consent laws are enforced,” he added. “With things like public funding, if money doesn’t show up, that’s self-enforcing. With informed consent, you’re kind of relying on the clinic to supervise itself, which it may or may not do. But essentially if you get situations where, you know, people have to make two separate trips, that does raise the economic cost, that does get the numbers down.”

Asked about New’s comments, a spokesperson for the Susan B. Anthony List told The American Independent that informed-consent laws are intended to help women, not hinder their decisions.

“The goal with both informed consent legislation and waiting periods is to provide essential information to the mother thinking about abortion and ensure she has time to consider it,” said Mallory Quigley in an email. “States are advising mothers of fetal development and alternatives and providing reassurance that the community prefers childbirth over abortion. The waiting period is not a tax but a time for reflection and even consultation about the support services available to mothers.”

Quigley referred TAI to one of New’s studies, which was published in 2011 in State Politics and Policy Quarterly. According to Quigley, New “found that holding a variety of economic and demographic variables constant, a range of state informed consent laws were effective in helping mothers to choose life, regardless of whether these laws required two trips to the clinic.”

She also added: “The fact remains that abortion clinic revenues are very substantial—by conservative estimates, abortion procedures account for 46% of all Planned Parenthood clinic revenue. The abortion clinics themselves have far more control over the cost of an abortion than anyone else.”

PolitiFact Florida has analyzed a similar claim about Planned Parenthood’s abortion revenue and has labeled it “false.”

A 2009 Guttmacher Institute literature review analyzing the impact on abortion of state mandatory counseling and waiting period laws cited research finding that implementation of Mississippi’s 1992 mandatory counseling law, which called for an extra in-person visit, was followed by a drop in abortions in Mississippi but a smaller increase in the rate of Mississippi residents obtaining abortions in neighboring states like Tennessee and Alabama.

Elizabeth Nash, state issues manager of the Guttmacher Institute, told The American Independent that although abortion restrictions that lead to higher costs for women might have the effect of reducing abortion rates in those states, these laws don’t address the broader issue.

“None of these restrictions reduces the need for abortion,” Nash said. “This is all about abortion and has nothing to do with reducing unintended pregnancy.”