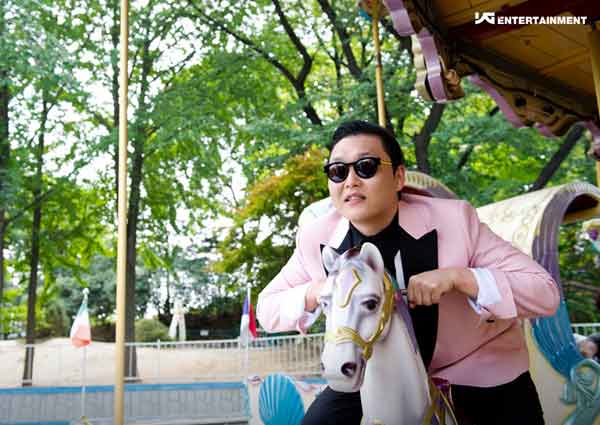 If you haven’t been following South Korean rapper PSY’s meteoric ascent to transcultural ubiquity, allow me to get you up to speed: “Gangnam Style” is now the most-watched Korean pop music video on YouTube, and as of last Thursday, the most-liked of all time, according to the Guinness Book of World Records. The song, which currently tops the iTunes charts in the United States, United Kingdom, Canada, Australia, and a half-dozen European countries, just jumped to the 11th spot on Billboard’s Hot 100 after debuting at No. 64 hardly a week ago.

Since its release on July 15, PSY’s addictive new single has been dissected, parodied, translated, and meme’d (Move over, #YOLO). It’s inspired propaganda in North Korea, a gun fight in Bangkok, and this surreal moment on the Ellen DeGeneres Show. Justin Bieber’s manager promises to turn PSY into an American shining star. E! declares “Gangnam Style” is so in, it’s already out. Like a knight in a one-button tuxedo, Jae-Sang Park, the 34-year-old father of twins, galloped into our cultural consciousness atop his invisible horsey and captured our hearts with his irresistible hook and four-step jig.

K-Pop heavyweights like Girls’ Generation and 2NE1 have spread hallyu (meaning “Korean Wave”) popular culture across the globe, garnering devoted fan followings in East Asia and Latin America. (Part of a Brazilian rainforest is named after K-Pop veteran Seo Taiji.) Carefully pruned and primped for mass consumption, these idol groups have made some inroads in the United States, particularly in coastal cities, like Los Angeles and New York, where immigrant subcultures proliferate. Yet PSY, after more than a decade in the business, has accomplished what these glossy young superstars have ceaselessly failed to do: He’s entered the American mainstream.

Part of the video’s mass appeal is obvious: PSY, a longtime comedic performer, is downright hilarious in “Gangnam Style.” His song is catchy; his dance moves are easy to replicate (though, poorly—”ride” at your own peril). His latest song-and-dance number doesn’t depart from his usual shtick.

“Gangnam Style” is “very different than the kind of K-Pop that has been trying to break into the United States to this point. It’s got the unique factor,” says Crystal Anderson, an associate professor of English at Elon University who studies hallyu culture. “But I also think from a cultural studies point of view, we cannot discount the relationship that American culture has with Asian masculinity.”

“If you go all the way back to someone like Bruce Lee,” she continues, “Bruce Lee could not be the star of Kung Fu the television series because the United States was not ready to see an Asian male in a lead role. To date, we still don’t have a lot of lead roles taken by Asian men in television, in movies, and they are practically nonexistent in the American music scene.”

In an essay on her blog High Yellow, Anderson argues that PSY owes some of his newfound popularity to the racial stereotypes that Hollywood and the television media have long perpetuated: Think Long Duk Dong from 16 Candles or Leslie Chow from The Hangover. Like PSY, they epitomize the “comedic Asian male” trope: buffoonish, desexualized, and emasculated.

“He’s this chubby, happy guy. We can embrace that in a way we can’t embrace…other Asian male bodies that challenge the constructions of Asian masculinities that have occurred in the United States,” Anderson says.

That’s part of the reason why she thinks K-Pop’s chiseled male idols, like the South Korean heart throbs in Big Bang, have had a particularly tough time making headway in the American music market.

You only have to look at a handful of other Asian and Asian American men that have made any impression in mainstream American music to guess what role PSY fits. Just this year, Korean American Heejun Han made it to the elusive top ten of American Idol and, while his buttery baritone did cut muster, it was his off-stage antics as a hilariously deadpan prankster that the public particularly reacted to. Before Han, the other Asian male that made any particular impact in American mainstream music was William Hung. Yeah.

That’s right: alongside clowns from other mediums like Ken Jeong (and yellow-face disgraces like Mickey Rooney’s Mr. Yunoishi from Breakfast at Tiffany’s), PSY fits right into the mainstream-friendly role of Asian male jester, offering goofy laughs for all and, thanks to PSY’s decidedly non-pop star looks, in a very non-threatening package. Psy doesn’t even have to sing in English or be understood because it’s not the social critique offered by the lyrics that matters to the audience, but the marriage of the funny music video, goofy dance, and a rather catchy tune, of which two of the elements are comical and, again, non-threatening.

PSY is the “Asian man who makes it” because he fits neatly into our pop cultural milieu wherein Asian men are either kung-fu fighters, Confucius-quoting clairvoyants, or the biggest geeks in high school.

What do you think? Are we laughing with PSY as he takes his rightful place in pop cultural history? Or at him, as Anderson believes? Watch the video (for, admit it, the upteenth time this month) below and give us your take in the comments.