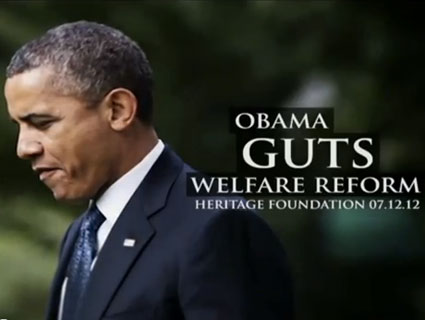 In recent weeks, a Mitt Romney campaign ad has flashed across television screens blasting President Obama on the issue of welfare. The ad claims Obama “gutted” the requirement in the 1996 welfare reform law that recipients look for work in exchange for government support. Media fact-checkers quickly debunked Romney’s attack—PolitiFact rated it “Pants on Fire”—and Obama’s campaign lashed back with a TV ad of its own. Yet Romney stuck with the welfare attack on the stump, and Romney aide Ashley O’Connor said the ad was the campaign’s most potent of 2012.

Romneyland didn’t whip up the bogus welfare attack on its own. It relied instead on the work of Robert Rector, a senior researcher at the conservative Heritage Foundation think tank in Washington, DC.

Few Americans outside the Beltway will recognize Rector’s name. But it’s worth knowing that, for a national campaign spot, Team Romney turned to a man who holds controversial, and in some cases inaccurate, views of poverty and economics. Rector has claimed that poverty doesn’t impact children, that you’re not really poor if you have air conditioning or a car, and that the very idea of welfare lifting Americans out of poverty is “idiotic.”

Rector is the focus of a new opposition research document by the Bridge Project, a liberal nonprofit group digging into the personnel, policies, and funders in the conservative movement. The Bridge Project is affiliated with American Bridge 21st Century, a super-PAC that researches Republican candidates. (Unlike American Bridge, the Bridge Project does not disclose its donors.) The two groups are the brainchild of David Brock, the ex-conservative journalist who founded the watchdog group Media Matters for America. Bridge Project spokesman Chris Harris says it’s “critically important” for Americans to know where political leaders get their information. “As this report shows, not only are conservatives’ welfare attacks downright false, but they come from a man with a long history of minimizing the struggles of the poor and villainizing the very idea of government assistance for those who need it,” Harris says.

Rector takes full credit for inspiring Romney’s welfare attacks. At a Heritage Foundation blogger briefing, he said that “it was my research that was featured in those ads. It was all over those ads.” And Rector has dismissed the fact-checkers’ debunking of his claims that Obama gutted welfare reform by giving states more flexibility to fulfill welfare’s work requirements. Those critical fact-checkers didn’t call him up, he said at the Heritage briefing, “because they knew perfectly well that if they talked to me they might run into a fact that would counter their spin.” (Rector did not respond to a request for comment made through the Heritage Foundation.)

Rector has made controversial and dubious claims on the issues of poverty and economics for decades. In 1995, for instance, he said to a Washington Post reporter: “Is poverty harmful for childhood? I think not.”

Julia Isaacs, a senior fellow at the Urban Institute who studies childhood poverty, says there’s “considerable evidence” indicating the opposite of what Rector claims. Research shows that children living in poverty perform worse in school, earn less money later in life, and suffer poorer health outcomes (PDF). Poverty is far from the only factor impacting a child’s life, but it’s a crucial one. “The best available evidence tells us that poverty itself does significantly impact children’s lives,” Isaacs says.

Over the years, Rector has raised eyebrows for claiming that poor people aren’t actually poor if they have air conditioning, a car, a microwave, or other “modern amenities.” In a 2011 report, he questioned the government’s assertion that more than 30 million people were poor by pointing to different “modern amenities” they owned. The people the government calls poor, he wrote, “are not poor in any ordinary sense of the term,” while the real poor “are a minority within the overall poverty population.”

Curtis Skinner, director of the Family Economic Security program at the National Center for Children in Poverty at Columbia University’s Mailman School of Public Health, says Rector’s argument is “absurd.” The consumer goods Rector highlights in his report are basic necessities, not luxuries, and some of them—a car, TV—are needed to find work. “It makes no sense to me that having these basic consumer goods means someone isn’t in poverty,” Skinner says. “I think it’s an absurd argument.”

And as Slate‘s Matthew Yglesias and others have pointed out, poor people owning video game consoles or big-screen televisions doesn’t speak to how well-off the poor actually are; it shows how cheap electronics have become. “Even a low income person can reliably obtain a level of television-based entertainment that would blow the mind of a millionaire from 1961,” was how Yglesias put it. The left-leaning Center for American Progress argued that a refrigerator, a cellphone, and A/C echoed Skinner’s argument, and claimed that ranking how poor (or not) a family is based on which basic appliances they own is “heartless” and “foolish”: “Heartless because they ignore the fact that it takes much more than a few appliances to support a family. And foolish because they lend credence to the calls for cutting the supports that research has shown are necessary for every child to become a healthy and productive adult.”

Rector’s ideas about poverty, work, and wealth don’t sit all too well with experts in these fields. But they’re good enough, it seems, for Mitt Romney: The only source his welfare ad cites is the Heritage Foundation.