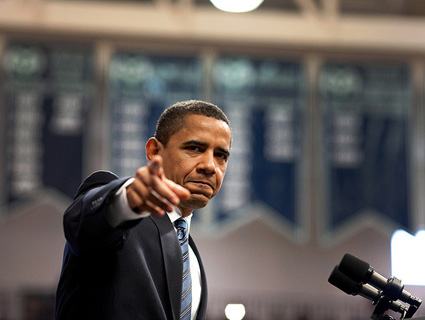 When Barack Obama takes the stage—without Greek columns—on Thursday night, at the conclusion of the Democratic convention in Charlotte, he will have some explaining to do. As many pundits and politicos, including strategists within the president’s own camp, have pointed out, Obama must remind voters discouraged by the anemic recovery that the economy was in a free fall when he entered the White House, and he must contend that his actions prevented further collapse and reversed the trend from job loss to job gain (albeit less than rip-roaring job gain). Proclaiming accomplishments while simultaneously acknowledging the harsh reality of the moment will be difficult. But Obama has another tough assignment: blaming the other side.

In 2008, Obama won by jazzing up two different blocs of voters. There was the usual Democratic constituencies who were enthused about Obama the candidate and his policy positions: young adults, African Americans, Latinos, and supporters of gay rights, unions, environmental action, and abortion rights. Then there were voters moved by Obama’s vow to change Washington and transcend the petty and never-ending mudwrestling of the nation’s capital.

I’m no pollster, but at Obama mega-rallies in the final weeks of the 2008 election, I conducted my own ad hoc focus groups, asking members of the large audiences why they had come. And a pattern developed. Voters in their 20s often mentioned the Iraq War and Obama’s vow to end it. African Americans referred to the historic nature of his candidacy. Women in their 30s or 40s pointed to kitchen table economic issues, such as health care. Men in the 40s and 50s—mostly white guys—often first said they fancied Obama’s pledge to make Washington work, many adding they were not as liberal as Obama or not even Democrats. But they had been moved by Obama’s calls to reshape and elevate the game in Washington and judged it as authentic. His ideological-minded base desired a president who would fight damn hard for his progressive agenda; his other supporters craved a peacemaker who would transform Washington into a citadel of functionality that could, without much fuss, produce policies that advance the nation’s interests.

On the economic front, Obama can cite the auto bailout and the jobs gains that have occurred on his watch, as well as other accomplishments (the popular provisions of health care reform, the bin Laden raid, the Lilly Ledbetter act, Wall Street reform, and more). But he cannot claim success on the Washington front. The town is more dysfunctional than ever. (See the debt ceiling nightmare.) This past weekend the Washington Post put it this way on the front page:

Today Obama’s [2008] words sound quaint, even naive. Instead of bipartisanship, there is polarization as deep as it has been in modern times. Instead of cooperation, there is confrontation. Instead of civility, there is rudeness. The political system seems frozen and more resistant to compromise than ever. Two months before the 2012 election, the campaign has become an all-or-nothing battle over the future direction of the country.

The newspaper, observing that Obama is threatened “because of the disappointment felt by voters” on this front, does note that Obama “ran into a wall of opposition from the Republicans,” while adding that there “are also questions about how hard Obama tried.”

This they’re-all-to-blame approach is popular in mainstream political analysis, though a close reading of the Post piece might cause a reader to tilt toward Obama’s side. Another good example of this powerful media frame was the New York Times‘ epic account of the debt ceiling debacle, which could not resist the gravitational tug of moral equivalency, concluding, “Obama and [House Speaker John] Boehner have clung to their separate realities not just because it’s useful to blame each other for the political dysfunction in Washington, but because neither wants to talk about just how far he was willing to go.”

Obama and his crew need to break through the compelling it’s-everyone’s-fault narrative. If he is lumped in with the opposition when it comes to culpability, he loses, for he is the politician who pledged to do better. The Republicans need only to battle to a messy who-knows tie to bolster the argument that Obama fell short in this key mission. If voters can’t sort out who’s really accountable for Washington’s ugliness, Obama will bear (or at least share) the burden of this failure. (And Mitt Romney will not.)

The president, though, has reality in his favor. In a noble effort, Thomas Mann, a senior fellow at the Brookings Institution, and Norman Ornstein, a resident scholar at the American Enterprise Institute, earlier this year published a book, It’s Even Worse Than It Looks: How the American Constitutional System Collided With the New Politics of Extremism, in which they insisted that Republicans are indeed the guilty party. These two guys are Washington mainstreamers and hardly quick or eager to issue such a severe verdict. Here’s their summation:

We have been studying Washington politics and Congress for more than 40 years, and never have we seen them this dysfunctional. In our past writings, we have criticized both parties when we believed it was warranted. Today, however, we have no choice but to acknowledge that the core of the problem lies with the Republican Party.

The GOP has become an insurgent outlier in American politics. It is ideologically extreme; scornful of compromise; unmoved by conventional understanding of facts, evidence and science; and dismissive of the legitimacy of its political opposition.

When one party moves this far from the mainstream, it makes it nearly impossible for the political system to deal constructively with the country’s challenges.

That’s a strong indictment from these fans of Washington centrism and compromise. (Their Republican rogue’s gallery includes Newt Gingrich, Grover Norquist, Rep. Allen West, and the House Republican leaders who countenance the extremism within their caucus.) And they urged the Washington press corps to resist the siren call of both-side-ism: “We understand the values of mainstream journalists, including the effort to report both sides of a story. But a balanced treatment of an unbalanced phenomenon distorts reality. If the political dynamics of Washington are unlikely to change anytime soon, at least we should change the way that reality is portrayed to the public.”

Much of the establishment media has not taken Mann and Ornstein’s advice. The Republicans are not routinely depicted as obstructionists and extremists. The political disputes of Washington are frequently cast as food fights, with Ds and Rs each responsible for the flying mashed potatoes. And as long as Obama ends up with pie on his face, the congressional Republicans care little how much is on theirs.

Can Obama do anything to change this script? In the White House, his aides have often been protective of his initial not-so-partisan image. In early 2010, they were not eager to inject him into the congressional elections, telling House Democratic strategists that Obama’s brand (and standing with independent voters) was based on his promise to be above the common political fray.

Obama eventually went on the attack (to little avail)—with his advisers saying he was willing to take a hit to his reputation to help Democrats—and in the nearly two years since, he has demonstrated that he can be a partisan brawler. After the debt ceiling fight ended (miserably) and Obama no longer felt he was held hostage by GOPers willing to risk a financial crisis, he vigorously crusaded against Republicans for not supporting his jobs bill and then outfoxed Boehner regarding the payroll tax cut.

The scoundrels of Washington have Obama in something of a bind. Can he honor his previous vow to soar above partisanship yet simultaneously castigate Republicans for turning Washington into even more of an unproductive snake pit? This will require tremendous dexterity. But without such a move, he’s left with an unfulfilled promise that meant much to many of his 2008 voters. Can he afford not to address that disappointment? If Obama wants to remain Washington’s top dog, he will have to find a clear and elegant answer to this puzzle.