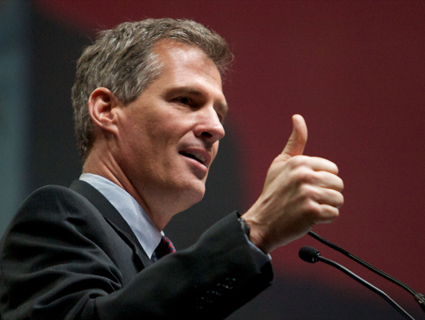 If you hadn’t been following the Massachusetts Senate race closely, the attack seemed to come out of nowhere: At Thursday night’s Massachusetts Senate debate, Sen. Scott Brown (R) charged that Democratic challenger Elizabeth Warren had represented the insurance giant Travelers in a case against asbestos victims. Far from being an advocate for the little guy, Brown argued, Warren was nothing more than a money-hungry corporate lawyer. If Brown’s criticism of Warren’s Native American ancestry was a not-so-subtle challenge appeal to identity politics, this attack went straight to Warren’s political core.

Except Brown is not telling the whole story about Warren and Travelers insurance. The Boston Globe explored the case—one of Warren’s only forays into corporate law—in detail in May and found a much more complicated picture. Warren had signed on with Travelers because she feared that a bad outcome could overturn an important part of federal bankruptcy law she’d long advocated for. One group of asbestos victims did oppose Warren and Travelers. But another, much larger group of asbestos victims were on the side of Warren and the insurance company. That’s because Warren believed she was securing a $500 million settlement from the insurance company on behalf of the asbestos victims.

That’s not how it turned out. After Warren, Travelers, and the largest group of asbestos victims won their Supreme Court case, Travelers reneged on its end of the deal and never paid out the $500 million settlement. Here’s how the Globe‘s Noah Bierman explained it:

Though some asbestos victims still objected to the Travelers settlement, another larger group of victims was on the same side as the insurer – at least during this portion of the case – in seeking to have the settlement upheld.

The Supreme Court decision gave Travelers a victory, validating the legality of the 1986 agreement and the immunity it provided. But it left to the lower courts to decide whether Chubb [another insurance company] had a right to challenge the 2004 settlement.

That triggered another series of legal arguments that ultimately unraveled the $500 million settlement, leaving Travelers with permanent immunity from most asbestos lawsuits without having to pay the victims.

It turned out pretty badly! But it’s not clear why that would make Warren a sell-out, as Brown suggests.

The beauty of this charge for Brown, though, is it’s an incredibly easy charge to level and a complicated one to explain—which is why you should expect to hear a lot more of it. And true to form, on Friday, in his first remarks following the debate, Brown held a press conference to hammer home the Travelers narrative.