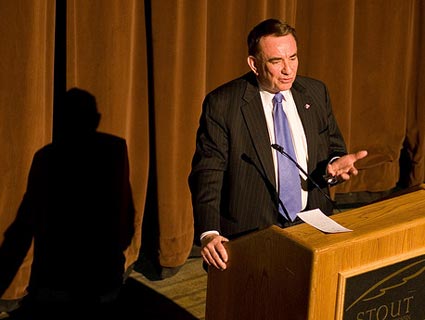 Before his 14-year stint as governor, before President George W. Bush tapped him to run the Department of Health and Human Services, and before his cushy gig as a wining-and-dining Washington lobbyist, Republican Tommy Thompson began carving out a reputation as powerful state legislator in Wisconsin. He rose quickly through the ranks of the Wisconsin GOP, and went on to become the longest-serving governor in state history. On his way to the top, Thompson found help in an influential policy organization then little known to the public: the American Legislative Exchange Council, or ALEC.

Thompson is now back in the spotlight as the Republican nominee in Wisconsin’s US Senate race. By now “Tommy” is a household name in the state, but less understood is Thompson’s relationship with ALEC throughout his career and his role in shaping ALEC’s agenda. As Thompson once admitted about his early days in the Wisconsin Legislature, “I always loved going to [ALEC] meetings because I always found new ideas. Then I’d take them back to Wisconsin, disguise them a little bit, and declare that it’s mine.” (A Thompson spokesman did not respond to a request for comment.)

Thompson professed his love for ALEC back in 2002. Today, the national organization is a lightning rod in American politics. A fierce advocate of free markets, privatization, and downsizing government, ALEC brings together dues-paying corporations and thousands of state lawmakers, most of them Republicans, to craft “model legislation” for use in state legislatures. Critics slam as ALEC a pro-business “bill mill” and a speed-dating service for big business and state lawmakers looking for ideas to take back home.

This year, ALEC has faced an onslaught of criticism from liberal groups for peddling “discriminatory” voter ID bills and the “Stand Your Ground” gun legislation brought to national attention by the Trayvon Martin killing in central Florida. Facing pressure from ALEC’s well-organized critics, four nonprofit groups and 32 corporations, among them McDonald’s, Procter and Gamble, and Walmart, announced plans to sever ties with ALEC. And in April, the good-government group Common Cause filed a complaint with the Internal Revenue Service alleging ALEC violates its tax-exempt status by lobbying state governments.

ALEC attorney Alan Dye called Common Cause’s allegations “patently false.” However, the group has acknowledged that the attacks are the fiercest against it in the organization’s history.

“ALEC’s welfare plan was hugely influenced by the reforms Thompson was making in Wisconsin,” says a former leader of the organization.

Created in 1973 by conservative activist Paul Weyrich, Illinois state Rep. Henry Hyde, and former Reagan aide Lou Barnett, ALEC lists Thompson on its website as one of a handful of Republicans who shaped ALEC “in its formative years.” Thompson was an early member of ALEC in the 1970s, and in 1991 he received the organization’s Jefferson Freedom Award, given annually to a lawmaker who “advances the fundamental Jeffersonian principles of free markets, limited government, federalism, and individual liberty.” Thompson was the organization’s second Jefferson award winner, preceded only by Ronald Reagan.

Three of Thompson’s signature legislative changes as Wisconsin governor bear ALEC’s fingerprints. In 1998, Thompson signed so-called Truth-in-Sentencing legislation into law. The measure—which 25 other states had passed in 1995 with ALEC’s help—increased maximum sentences for felons and eliminated parole. Wisconsin’s own version of the bill mirrored legislation written by ALEC. Then-Assemblyman Scott Walker (now governor) said that ALEC’s statistics on the benefits of the bill “were very helpful” to passing the bill.

Truth-in-sentencing legislation originated out of ALEC’s Criminal Justice Task Force, members of which included private prison companies such as the massive Corrections Corporation of America. It came as no surprise that Wisconsin’s law soon drove up corrections spending: Over the course of Thompson’s tenure, corrections spending ballooned from $179 million in 1990 to nearly $850 million in 2001—a windfall for companies like CCA. A 2010 report by the Wisconsin Taxpayers Alliance noted that, between 1993 and 1999, Wisconsin imprisoned six times as many people as neighboring Minnesota, despite the two states having strikingly similar populations and demographics.

Also under Thompson, Wisconsin became the first state in the nation to adopt a “school choice” program, an ALEC-backed education reform policy. In 1990, Milwaukee moved to a voucher program for low-income students; ALEC and the free-market Bradley Foundation in Milwaukee strongly supported such policy, and Milwaukee’s program borrowed from ALEC’s model legislation.  According to Mary Bottari, an ALEC expert and critic, it was the “camel’s nose under the tent for a long-term agenda, with the ultimate goal of privatization of public schools.”

Most of all, Thompson made a name for himself with his overhaul of Wisconsin’s social-welfare system. Thompson replaced the state’s existing system with “Wisconsin Works,” which forced welfare recipients to find work to collect benefits and capped the amount of time recipients could be on welfare.

Here, the familiar ALEC script got flipped: Thompson didn’t take his cues from ALEC; instead the organization modeled its welfare agenda after Thompson’s, according to former members. “ALEC’s welfare plan was hugely influenced by the reforms Thompson was making in Wisconsin,” says Ray Haynes, a former California state lawmaker who was ALEC’s national chair in 2000 and sat on its board from 1994 to 2006.

Thompson and ALEC didn’t always see eye-to-eye, however. For years, Thompson, who once chaired Amtrak’s board, supported high-speed rail construction; as governor he proposed a 110-mph rail route from Milwaukee to Madison, the state capital. But ALEC has long opposed government-funded high-speed rail projects. (Thompson has since backtracked somewhat on his rail support.) ALEC also ripped Wisconsin in a 1999 report for being “one of the nation’s most profligate” states, giving the state a D grade for its fiscal policy.

No matter: Thompson got the celebrity treatment at ALEC conferences, where his speeches were marquee events. “For a lot of conservative legislators across the country, Thompson had rock star status,” Haynes recalls. “When Tommy Thompson showed up at an ALEC conference, people made sure to hear him speak. He was the leading light on welfare reform in the ’90s.”

Indeed, ALEC might not be the organization it is today without Thompson’s involvement and inspiration. In 1996, Paul Weyrich, who cofounded ALEC and was an architect of the New Right conservative movement, was asked by a magazine to list his political heroes. His answer: Jesse Helms, Margaret Thatcher, and the man now aiming to be Wisconsin’s next Republican senator.