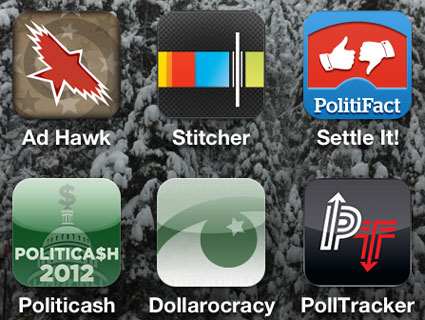 Some especially persistent voters rifle through Federal Election Commission filings in their spare time, poring over the latest data dumps and tracking outside money for insight into who’s influencing the vote. Luckily for those of us with less time (or patience), tech-savvy politicos have figured out ways to filter through all that info and send some of the juicier bits straight to our favorite gadgets. Now you can peel back the facade of the mysterious backer of that one issues ad or view a whole compilation of polls at a moment’s notice. These six apps can make it more enticing, not to mention a lot faster, to tap into what’s going on behind the scenes of the horse race.

The Political Shazam
Nearly half of the more than $500 million in political ads out as of August 2012 were funded by outside groups—committees with ambiguous sounding names like Priorities USA Action or Americans for Prosperity. Ad Hawk, from Sunlight Labs, essentially runs a background check on the constant stream of political TV and radio ads. You just let the app listen to any ad as it plays, and in less than 30 seconds it will identify the group behind the ad and its bankrollers, and tell you how much of its cash has gone to supporting (or trashing) Democrats or Republicans. Ad Hawk is especially useful for learning more about the notoriously elusive super-PACs and 501(c)s—although when I asked Sunlight Labs’ Director Tom Lee to name a notable recent ad, he pointed to Harold the Cat’s gag run for a Virginia Senate seat. (Free, available for iOS and Android.)

The Donor Data Miners
MapLight’s Politicash 2012 sifts through the donations pouring into each candidates’ coffers and summarizes where the cash is coming from. The results can be a bit surprising: Obama’s top campaign contributor, according to Politicash, are federal employees, with $2.1 million in donations. For Romney? Goldman Sachs employees, who gave a relatively paltry $726,490. (Super-PAC donations are another story; see our interactive map of the dark-money universe, where Romney reigns.) Culling the latest data from the Federal Election Commission, Politicash 2012 also keeps a running tally of how much money Obama and Romney and their primary super-PACs have raised and spent, and how much cash each candidate and his super-PACs have left—stats that for some reason make rooting for your candidate more exciting. (Free, available for iOS and Android.) If you want to scrutinize the donations behind congressional races and investigate interest groups, there’s also Dollarocracy, an app from Center for Responsive Politics (also free and available for iOS).

The Handheld Truth-O-Meter
President Obama claims that 50 million people would lose their health insurance if Obamacare is repealed. Romney asserts that Obama has “doubled” the deficit. Settle It! helps you get to the truth of such claims, drawing on research by the crack fact-checkers at PolitiFact. The app has a searchable database of more than 6,000 statements made by government officials, public figures, and celebrities—all rated for truthfulness. (The above statements by Obama and Romney are deemed “Mostly False” and “False,” respectively.) Settle It! lets you star favorite topics for easy access at cocktail parties—or post them directly to Facebook for your next heated debate with your coworker’s tennis partner’s third cousin. (Free, available for iOS and Android.)

The Pollster’s Paradise
Wondering what effect the latest news cycle is having on voter opinion nationwide or in the swing states? Talking Points Memo‘s PollTracker will push more real-time polling data to your iDevice than you ever knew existed. The app averages an array of polling sources—predictions for the November presidential outcome, for instance, might combine the latest Reuters, Rasmussen, and Gallup figures—and displays percentages in big, easy-to-read numbers. You can search by race, state, or political issue. And with stats updated minutes after each new poll is released, the app gives an instant snapshot of what the country is feeling—for the moment at least. (Free, available for iOS.)

The Spectrum Searcher
Stitcher’s Election Center 2012 is like TiVo for all the political talk radio you’ve been missing while canvassing door to door. This election-centric hub within the main Stitcher app scours more than 10,000 radio programs and podcasts for political buzzwords like “voter ID law” or “fiscal cliff,” and then lets you fast forward to the specific mention in a broadcast, or listen from the beginning. It also has streams for all of the presidential candidates—third parties included—with audio of all of their recent appearances on the airwaves. (Free, available for iOS and Android.)