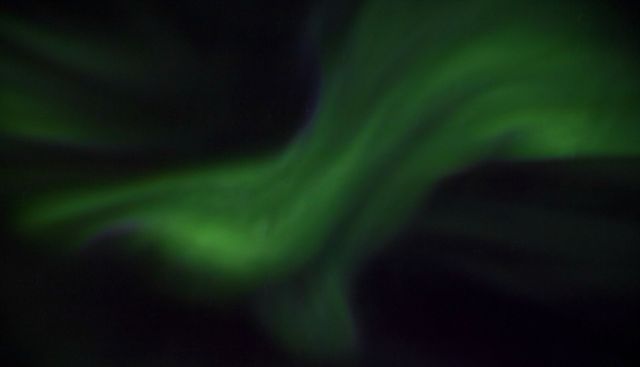 Aurora borealis seen from the deck of the USCG icebreaker Healy in the Arctic Ocean: Photo courtesy of Laurie Juranek, Oregon State University

Last night those of us on night watch—or those who stayed up especially for it—saw the show of a lifetime. The forecast was for a strong aurora borealis starting around midnight local time. The skies had been overcast and worse all day, as we frequently sailed into blinding snow squalls. There didn’t seem a whole lot of hope that we’d get a glimpse of the magical polar lights.

I spent a couple of hours on Healy‘s bridge staring out into the night. The bridge is the highest interior space on the ship, five decks above the main deck, with wraparound windows designed to give whomever is sailing the ship a view in all directions. The bridge at night is one of my favorite parts of being at sea: hushed, completely dark except for pinpoints of red light (red light maintains your night vision), with an intimate view, no matter how dark the night, of sea and sky. It’s a cocoon of intense concentration, punctuated by the soft chimes of the ship’s bells marking time. 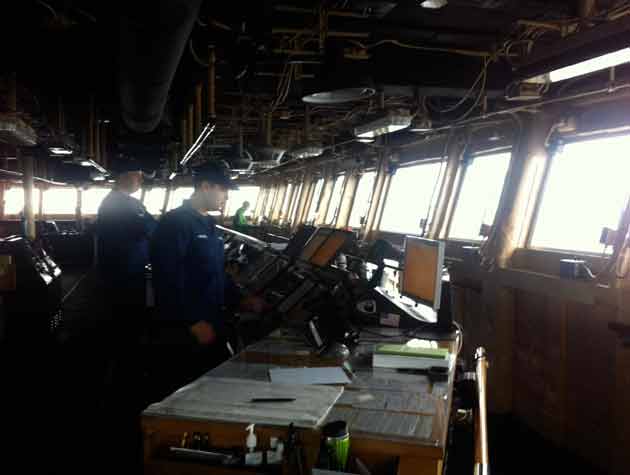 The Healy’s bridge during the day. Julia Whitty

At midnight, what I first thought was a break in the clouds began to pulsate. Then suddenly the clouds sheared away and stars burst through. Except they were radically different from stars in a clear sky. They were bigger and seemingly brighter, like glow-in-the-dark stars on a kid’s bedroom ceiling, amplified by the curtains of green, blue, white, and red aurora shooting across the sky.

Now the wraparound view of the bridge wasn’t nearly big enough. Several of us threw on every piece of clothing we had at hand and braved the open weather deck behind the bridge. It was cold and about 30 knots of wind were blowing. Yet it was the sky that took our breath away. The whole dome of heaven was transformed into sheets of translucent silk that shook out upon the stars, rippling across the Pleiades, the Big Dipper, and the North Star. The Milky Way was painted with a luminescent blue geyser that erupted and subsided almost faster than my eyes could register it. And then another, and another. Looking straight up, I saw veils of billowing emerald aurora falling down upon me, as if I were standing in a waterfall of light sparkling with stars and planets.

And through it all, to our left, off our port beam as we sailed northeast, the strongest beacon of all in this magical sky burned ominously from the platform of Shell‘s drilling rig in the Arctic Ocean, reminding us of how fragile these lights, this world, really is.

The map below, from the Northern Alaska Environmental Center will give you an idea of our position during the events described in this post. The ship was about three-quarters of the way between the town of Wainwright and the yellow dots marking Shell drilling sites in the Chukchi Sea: 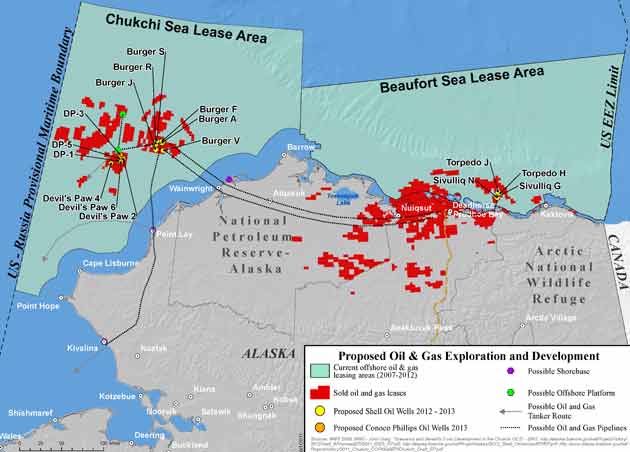