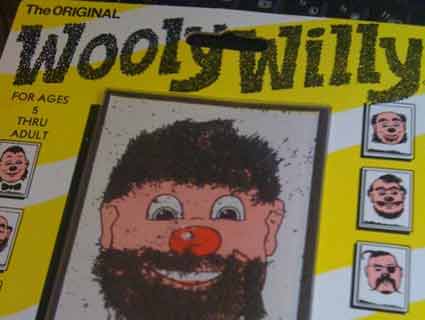 No, it wasn’t a dare. On Thursday, the New York Times reported that an entrepreneur allegedly went ahead and tried to turn the Pacific Ocean into a Wooly Willy, all in the name of science:

“A California businessman chartered a fishing boat in July, loaded it with 100 tons of iron dust and cruised through Pacific waters off western Canada, spewing his cargo into the sea in an ecological experiment that has outraged scientists and government officials.”

According to the NYT, the businessman, Russ George, was acting on behalf of the Haida, a Canadian First Nation group that paid George $2.5 million to help replenish their salmon stocks. The plan reportedly involved a process known as iron seeding, in which iron dust works like fertilizer for photosynthesis. By dumping iron into the ocean, George and the Haida anticipated the nutrient-hungry phytoplankton population would boom, thus providing more fish food for the community’s depleted traditional source of revenue. The group also considered selling offsets from the carbon that George proposed the algae would suck up, in theory like a giant photosynthetic lung. Sure enough, the marine experiment resulted in a massive growth of algae that unfurled across nearly 4,000 square miles, an area slightly smaller than the nation of Lebanon.

George was somehow able to convince NOAA to lend him some of the equipment needed to carry out his scheme.

A number of marine scientists have expressed shock in the aftermath of the experiment, as well as concerns over geoengineering, the name given to controversial plans to artificially remove carbon dioxide from the atmosphere in order to slow the engine of climate change. Mark L. Wells, a marine scientist at the University of Maine, told the New York Times that it was “extraordinarily unlikely” that George could prove he somehow offset atmospheric carbon, and Victor Smetacek, an oceanographer with the Alfred Wegener Institute for Polar and Marine Research, called the behavior, which other scientists warn could actually worsen acidification in the deep ocean, “disastrous.”

Still, George, whose company Planktos once plotted in 2007 to sprinkle iron near the Galapagos Islands in order to sell carbon credits, was somehow able to convince the US National Oceanic and Atmospheric Administration (NOAA) to lend him some of the equipment needed to carry it out. A NOAA spokesman told the Times that the agency had been “misled” and that George and his team “did not disclose that [they were] going to discharge material into the ocean.”

International organizations have called the experiment a violation of at least two UN conventions which forbid ocean fertilization for private profit. The Canadian government has announced that it’s launching an investigation into George’s activities, despite the fact that the businessman has called the government complicit. “Canadian government people have been helping us,” George told the Guardian. “And we are expecting lots more support as we go forward.”

Meanwhile, as journalists and government are scrambling to uncover exactly how the oversight occurred, George is sticking by the goodness of his intentions with regard to oceanic climate change mitigation. “If somebody doesn’t step forward to save the oceans,” he told Canada’s Globe and Mail on Thursday, “it’s too late.”

Could anyone have said it better? Head-desk.