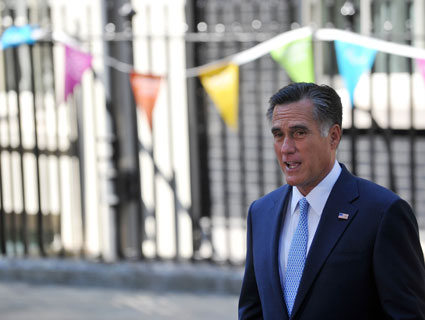 Just about the only time Mitt Romney mentions the State Department is when he’s using the deaths of US diplomats in Benghazi to bash President Barack Obama. But when it comes to what he’d actually do on the civilian side of the foreign policy ledger, Romney’s agenda is as incomprehensible as his budget math.

“I don’t know Romney’s position on foreign assistance, I don’t know it on AIDS or global health, I don’t know it on economic support funds or security assistance funding,” says Gordon Adams, who used to handle the national security budget for the Clinton administration and is now a fellow at the Stimson Center, a foreign policy think tank. “This is just sort of a blank space, details to be determined.”

The Romney campaign’s website doesn’t do much to fill in the details of what Romney would do on foreign affairs. When asked to comment for this story, the campaign pointed to a 2011 white paper that offers little guidance on budgetary matters. But Romney’s public statements, his book, and his running mate’s budget proposals offer some hints about what he might do on foreign affairs if elected president.

In speeches, Romney has spoken in abstractions about the need to enlist private industry in foreign aid and lavished praise on former Secretary of State George Marshall, who spent billions rebuilding post-World War II Europe. But the GOP candidate’s stated priorities for defense spending and tax cuts make reductions in other areas of government all but certain, and in the past, Romney has spoken dismissively of foreign service officers and proposed making the state department more like the military. If the budget proposals of Romney’s VP pick, Rep. Paul Ryan (R-Wis.), are any indication, the State Department would be among the first to face the budget ax under a Romney administration.

Romney has also repeatedly pledged to spend 4 percent of GDP on defense. Retired US Major General Paul Eaton, who is now a senior adviser with the left-leaning National Security Network, says that would mean cutting the State Department out of the equation and dumping “everything that you want to do as a nation in the foreign policy arena on the shoulders of the Defense Department”—even though “they don’t want it.”

If Romney’s 2010 memoir, No Apology, is any indication, making diplomats more like the military is what Romney has in mind. In that book, he dismisses State Department officials as “wonderfully intentioned” but ineffective. To fix the problem, he proposes dividing the world into sections and delegating to “one individual” the responsibility to “lead the promotion of democracy, freedom, stability and free enterprise in that region” whom Romney refers to as “the ambassador from CENTCOM or any of the other regional military commands.” (Elsewhere Romney has referred to this hypothetical position as a civilian one, so it’s unclear how the US military’s Central Command fits in.) Romney writes that it would be ideal for “other allied nations” to create “similar regional positions,” expecting the rest of the world to overhaul their governments to fit Romney’s new foreign affairs pardigm because the “country by country ambassador/career/CIA divisions” are a “nineteenth-century system” he calls “outmoded.” The only diplomat Romney praises in the “soft power” section of his book is Bush-era UN Ambassador John Bolton, a frequent associate of anti-Muslim cranks like Pam Geller. (Bolton is now advising the Romney campaign.)

Romney still seems to have a “reorganization” of the State Department along these lines in mind. Asked whether this still reflected Romney’s agenda, his campaign pointed Mother Jones to a white paper published in 2011 that states that “Romney will work with Congress and relevant Executive branch agencies to begin a process of reorganization toward unified budgetary and directive authority under one official responsible for all diplomatic and assistance programs within a particular region. These will be designed to mirror the regional military combatant commands.” (Romney promises these envoys won’t be “czars”). The paper doesn’t say how this would be reflected in budget priorities.

As chairman of the budget committee, Ryan’s budgets have typically reduced funding for the State Department. His 2012 budget plan reduced overall spending for foreign affairs by 19 percent, while his 2013 budget plan cut it by 9 percent, all while increasing spending on defense. While this approach reflects Romney’s and Ryan’s hawkish views on foreign policy, it’s also a reflection of the State Department’s lack of political influence and politicians’ greater political and financial ties to the defense industry.

“Typically what happens [with a GOP majority] is the overall budget level whacks the bejeezus out of foreign affairs,” Adams says. “It’s an account that doesn’t have a constituency in the Congress, which means it’s very easy to take money away from it without anyone squealing in pain the way the defense industry would squeal if you take their budget down.” But Adams adds that, thanks to internal disorganization, the State Department often struggles to convince lawmakers that foreign affairs spending is worthwhile. And without a Secretary of State like Colin Powell or Hillary Clinton who can garner bipartisan admiration, that task gets even harder.

“I don’t know what he would do at the State Department, and maybe it would depend on who ended up as Secretary of State,” Adams says. “Could be [former George W. Bush aide] Dan Senor. That would be fun. Could be John Bolton; that would be even more fun.”