Ask five badge-holders of the 13th Americana Music Festival and Conference “What is Americana?” and you’ll get at least six different answers.

The more than 100 acts at the annual mid-September Nashville event covered a wide spectrum. You’ve got your ’60s-vintage Nashville veterans, singer-songwriters from the ’70s, new traditional and alt-country heroes of the ’80s and ’90s, and innovative new artists who blend and carry this rich inheritance forward. The stock-in-trade for Americana artists is excellent songwriting, stellar instrumental ability, and big-hearted, genuine delivery. 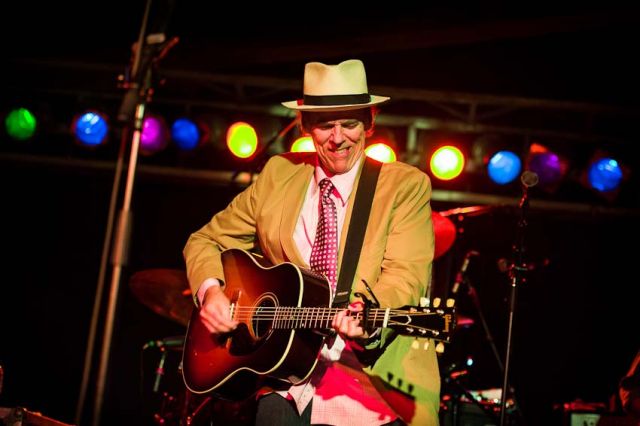 Most of the artists on the extensive lineup have releases on respected independent labels such as New West, Yep Roc, Rough Trade, Rounder, Sugar Hill, and Lost Highway, with many smaller labels sprinkled in between. And while Merriam Webster defines “Americana” as “a genre of American music having roots in early folk and country music”—the music I experienced at this year’s festival, nearly all of it excellent, was filled with surprising contradictions. 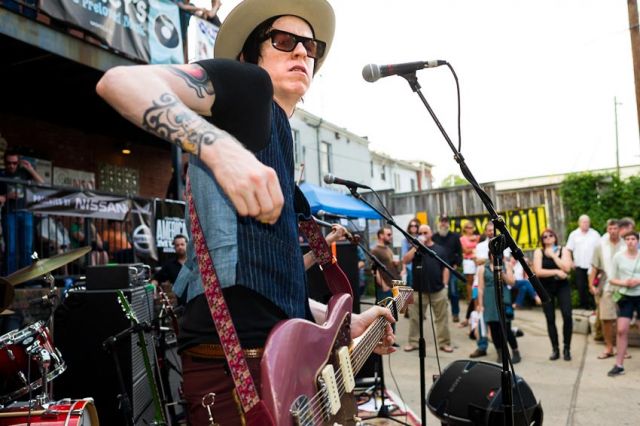 Three of the biggest winners at the annual awards ceremony in Ryman Auditorium eluded the strict definition. The Alabama Shakes, a deeply soulful rock group increasingly popular in indie-rock circles, won for Emerging Artist of the Year, beating out innovative bluegrass virtuoso collective The Punch Brothers. Booker T. Jones was honored with the Lifetime Achievement award for instrumentalist; while his deep catalog includes production work with Willie Nelson and Rodney Crowell, he is best known as the nucleus of the Stax Sound in Memphis, a soul man if there ever was one. 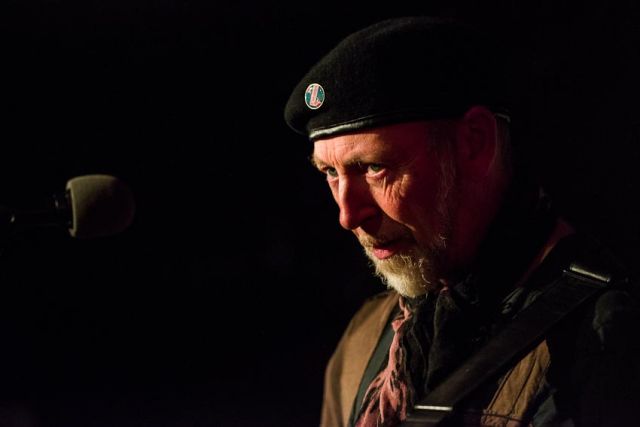 Lifetime Achievement for songwriting went to Richard Thompson, who is in fact a triple threat of singer, songwriter, and guitarist. While he knows his American music inside and out, Thompson’s best-known work—with the band Fairport Convention and with his former wife Linda Thompson—explores the peaty soil of music of the British Isles, which has its own centuries of history. Considering that most early hillbilly and folk music grew from regional adaptations of this music carried over from the Old World, Thompson’s credentials run deeper than most. 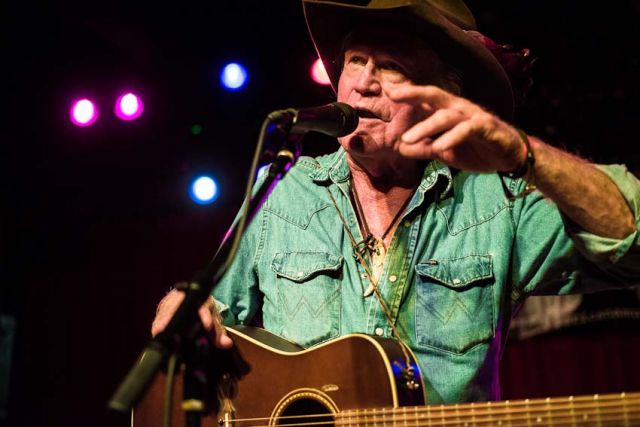 Texas-born and raised “Honky Tonk Hero” Billy Joe Shaver exemplified the elder statesmen at the fest, having written major country hits starting in the ’60s. He launched a long solo career in 1973 with a boost from Waylon Jenning’s Honky Tonk Heroes, an album devoted to Shaver and his songs. Shaver played with a lean rocking band that put the focus on his weathered voice and deceptively simple gut-punch lyrics. 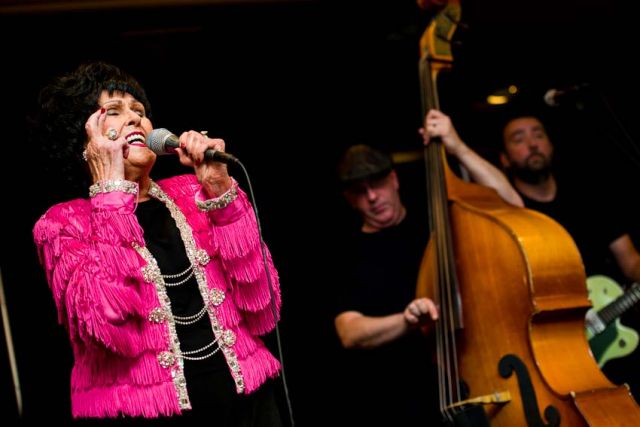 Wanda Jackson plays the lobby bar of the Downtown Sheraton in Nashville.

The following afternoon at the Downtown Sheraton, I caught Sugar Hill Records’ Wanda Jackson, a Rock and Roll Hall of Famer who got her start sharing bills with Elvis Presley in 1955. With a charming performance, Jackson demonstrated that she is still as focused and ferocious a singer as ever. Following a high-profile collaboration with Jack White, she has a new album due out next week. The album, produced by Justin Townes Earle, is titled Unfinished Business—though what unfinished business Jackson might have after 60 years of recording, I can’t possibly imagine. 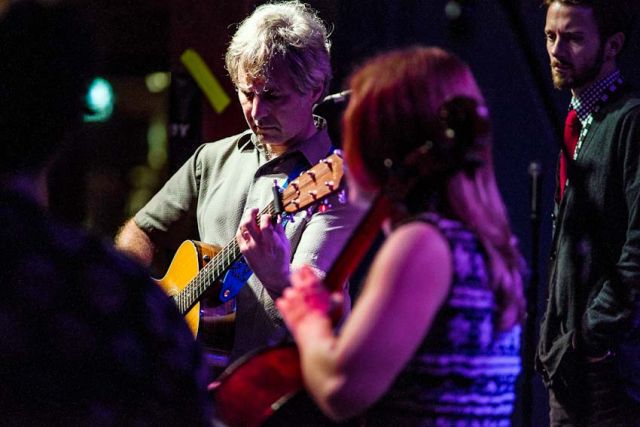 Chris Stamey with Emily Nelson and Brett Harris at the High Watt, Nashville.

On Wednesday night, as a clunky tribute to Levon Helm rumbled rather than rambled along in the Mercy Lounge down the hall, Chris Stamey played a delicate set to a small crowd. Stamey has roots in neither country nor folk, having come of age at the dawn of the alternative-rock era with his band The dB’s. Accompanied by a celestial ensemble of cello, violin, backing vocalists, and accordion, he built his songs with oblique chord structures and naked lyrics, the results often beautiful. 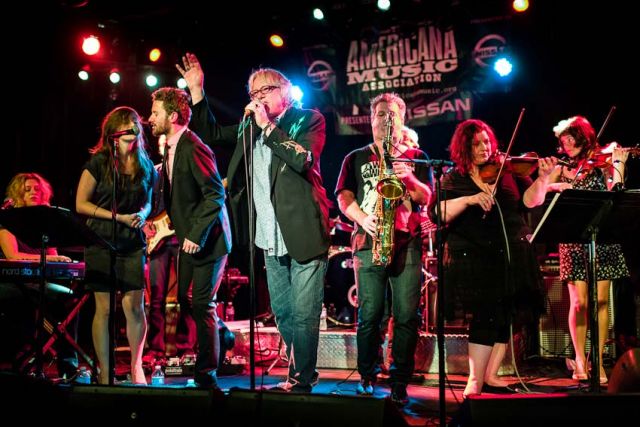 Mike Mills of R.E.M. leads a Big Star tribute at the Rutledge, Nashville.

Stamey resurfaced later in the week, anchoring the bass role in a large ensemble performing the Songs of Big Star, which included original drummer Jody Stephens and a full string section. The group brought a vitality and presence to the songs that was second only to listening to the original vinyl on a good stereo. R.E.M. founding member Mike Mills sang lead on “September Gurls” with a combination of powerful yearning and vulnerability that perfectly summoned the spirit of Alex Chilton, no hologram needed. The Big Star show capped a showcase at the Rutledge dedicated to the music of Memphis that also included The Bo-Keys, who carried on the gritty, hard-edged soul music of Stax and Hi Records with a tight, meaty fidelity. (The band includes members of the original Hi-Rhythm Section.) 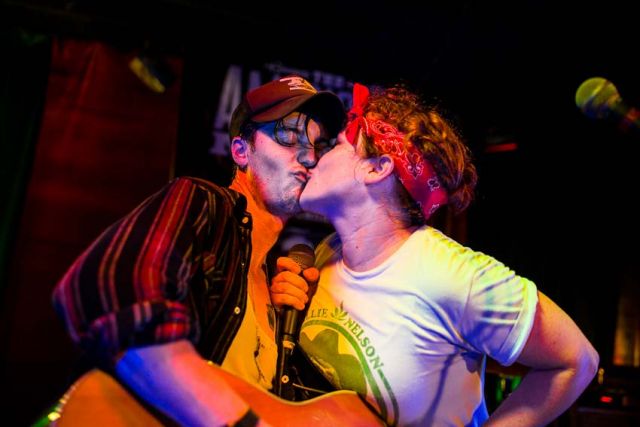 Shovels and Rope at the Basement, Nashville.

Younger artists earned their place alongside the masters with fresh energy and a demonstrated devotion to the tradition. The Basement, the venue below Grimey’s record store, served as the gathering place for newer artists. Shovels and Rope, the duo of Michael Trent and Cary Ann Hearst, was a standout. The pair sang in close harmony and close proximity, juggling drums, harmonica, guitar, and keyboard with doomed-lover charm and frenetic warmth. Inspired by what can be imagined as a crackly record collection of George and Tammy LP’s, they sang, “Hail hail 33! / Your violent hiss sounds so sweet to me / you’ve got a copperhead kiss hidden up your sleeve, 33.” 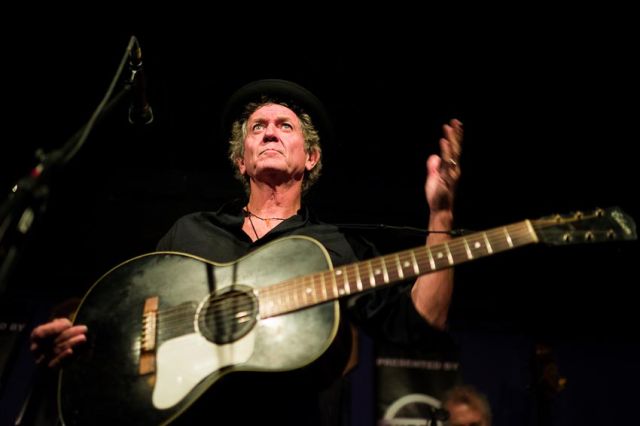 At the Station Inn—the storefront gospel church of acoustic music to the Ryman Auditorium’s mother church of country (both serve popcorn) —Rodney Crowell played the final set of the week. Crowell hits the Americana bulls-eye. He was discovered as a lounge act in the ’70s by Nashville big Jerry Reed, was a songwriter for and “Hot Band” guitarist with Emmylou Harris, recorded with and married Rosanne Cash, had a handful of number one hits as a solo artist, and has been putting out great albums ever since that effortlessly bridge country and rock music. To crib one of his song titles, the band was “Sex and Gasoline”—evoking passion, love, and darkness at a slow burn. Crowell is the kind of artist the Americana Music Association is best at championing: the true spirit of a Nashville that has nearly been eclipsed by slick twang-pop mega-hits about crushes, patriotism, and trucks. 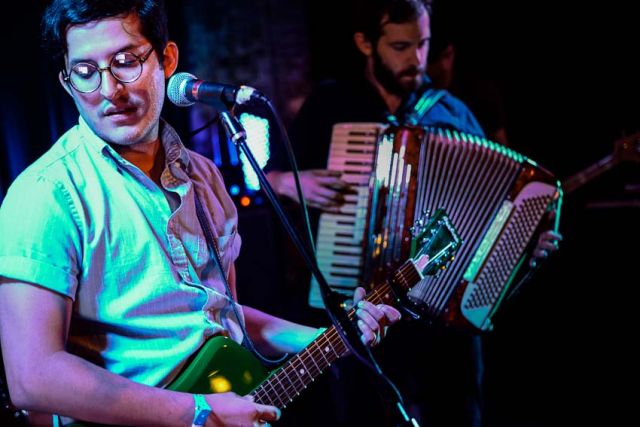 Buxton at the Basement, Nashville.

While the AMA’s efforts are clearly driven by a passion for great music, “Americana” is still a fuzzy term for what its festival celebrates. Some of the most satisfying and exciting music I experienced bled, blurred, and slipped between easy categorizations. It’s hard to put the joy into words, let alone one.